A life-long dedication to music has won Roger Covell, co-founder of the Australia Ensemble, the Sir Bernard Heinze Award for his outstanding contribution to music. 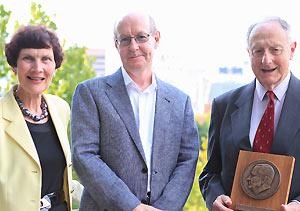 Covell (right) with his wife, Patricia Brown and Gary McPherson

A life-long dedication to music has won Roger Covell, co-founder of the Australia Ensemble, the Sir Bernard Heinze Award for his outstanding contribution to music in Australia.

Emeritus Professor Covell, based in UNSW’s Music Performance Unit in the School of Arts and Media, is an eminent Australian musicologist, critic and author and was the Sydney Morning Herald's principal music critic from 1960 until early 2001.

His activities at UNSW include operatic and choral-orchestral conducting, composing and arranging, musical direction of UNSW Opera, co-founding the Australia Ensemble@UNSW and the publication of ongoing research in opera, baroque and Australian music.

Professor Covell was recently presented with the award in front of 10,000 people during a Melbourne Symphony Orchestra concert at the Sidney Myer Music Bowl.

The annual award is jointly administered by the Melbourne Conservatorium of Music and the Friends of the Melbourne Symphony Orchestra.

Director of the Melbourne Conservatorium of Music Professor Gary McPherson said Covell’s commitment to Australian music has been "second to none".

"His dedication to chronicling Australia’s orchestral, operatic, chamber, choral, folk and contemporary music ensemble performances constitute a modern history in the growth and development of classical music culture in Australia."

Professor Covell said he was delighted that the award acknowledged the UNSW Opera performances of Australian works as well as major operas by Rossini, Verdi and Britten.

“The support given to UNSW Opera and to the still-flourishing Australia Ensemble@UNSW is in keeping with the University’s support of the performing arts and the arts in general from its earliest years.”

Professor Covell's contribution to the advancement of Australian music was also recognised at the Classical Music Awards in 2006. He is former national president of both the Musicological Society of Australia and the Australian Society for Music Education. He is also a Fellow of the Australian Academy of the Humanities.

Sir Bernard Heinze was one of the major pioneers of orchestral musical life in Australia and Ormond Professor of Music at the University of Melbourne for 31 years.