The prototype of the next generation of bus stop, featuring large interactive computer displays, sensors and sleek wooden panelling, is on display at Sydney’s Customs House. 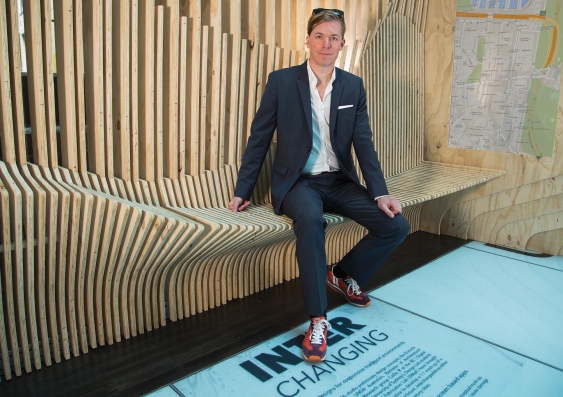 The prototype of the next generation of bus stop, featuring large interactive computer displays, sensors and sleek wooden panelling, is on display at Sydney’s Customs House as part of Sydney Design Week.

The digital technology at the bus stop gives real-time information on bus schedules and provide public information, directions, ticketing and even improved surveillance and safety of travellers.

“The pressures on public transport are predicted to increase in the next decade or so. We think this innovation will go towards relieving that by taking a user-centred approach,” says one of the designers Dr Hank Haeusler, from UNSW’s Faculty of Built Environment.

“At the moment, surveillance is passive, through security cameras,” says Dr Haeusler from the School of Architecture. “But we think that if you have the panels showing your image at the bus stop to people at other locations around the city, it will improve safety and there could be the chance for people to connect.”

The digital bus stop, called INTERCHANGING, has been three years in the making and could ultimately incorporate social networking, online shopping, multimodal travel and recycling, as well as information supporting active lifestyles and sustainability initiatives.

“The technology would also be an invaluable source of big data for transport companies, to help them improve their services,” says Dr Haeusler, who notes there has already been interest from industry.

The wooden panel concept was designed by UNSW students.

The bus stop is one of a number of UNSW contributions to Sydney Design Week, which runs until 24 August.

Following Design Week, the prototype will be on display at UNSW's Kensington campus.

When: Until Sunday, 24 August