Opinion To earn its name, the Art Gallery of NSW should leave the CBD

There is no reason to confine iconic architecture to the CBD, and every reason to think on a grand scale when planning infrastructure for the majority of Sydney’s population, writes Joanna Mendelssohn. 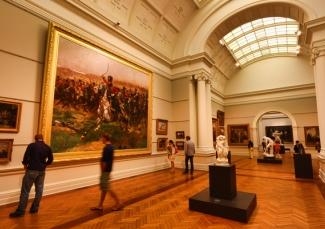 OPINION: The Art Gallery of NSW, surrounded by parkland near Sydney’s Harbour, opposite the Domain and the Botanical Gardens, is probably one of the most visitor-friendly art museums in existence.

The original portico and lobby gives the visitor a sense of history and classical traditions and works well with the human scale of Andrew Andersons’ modern building, which first opened in 1972.

Visitors feel welcomed, not intimidated. The occasional windows with views towards Kings Cross and Sydney Harbour relate directly to the places where many artists lived and worked. Despite the extensions – which mean it now tumbles down the hill towards Woolloomooloo – the building is not overlarge. Strangers can easily spend a full day there, but unlike New York’s Metropolitan Museum or London’s National Gallery they do not leave footsore and weary.

Walter Vernon’s 1896 design served to create a sense of harmonious classical culture in a colony far removed from Europe. The parkland surrounds were seen as lungs for the growing city next to a working harbour.

When the original Art Gallery of NSW was new, the population clustered around tram routes in what is now the inner city. The urban sprawl that so characterises modern Sydney did not really get underway until the end of the first world war, as Peter Spearritt’s book Sydney Since The Twenties demonstrates. Sydney’s  population is now centred near the banks of the Hawkesbury River to the far south-west of the harbour, an area that was farmland less than 50 years ago.

It is fair to say that the current building serves well the residents of the eastern suburbs, lower north shore and inner west. But this is the Art Gallery of NSW, not “Art Gallery of Sydney’s CBD”.

There is another problem.

Around the country audiences for art are growing at an ever accelerating rate, consolidating a long-term trend.

In 1972, when the Gallery opened its Captain Cook wing, I was a junior curatorial assistant. The exhibiting galleries were pleasantly empty of crowds.

Now the building is crowded, filled with school children, free-range visitors and international tourists. It is bursting at the seams. There is little doubt that it needs to expand.

The once adventurous modern galleries come from a time when exhibitions were conceived on a smaller scale. The drama of contemporary art now demands spaces with height and access to open air as well as dedicated temperature and humidity controlled areas. The current building can exhibit precious art very well – but not giant contemporary pieces.

The Gallery’s solution, promoted by the Trustees, former Director Edmund Capon and the current Director Michael Brand, is to build a mammoth new wing, Sydney Modern, to expand the building out towards the harbour. To this end the NSW government last year granted A$10.8 million to develop the concept for a A$400 million development.

No building, however distinguished, can justify the destruction of more of the city’s precious lungs. It says a great deal about the insular mindset of the old CBD-based establishment that they cannot see the obvious solution.

The metropolis of Parramatta is north-east of greater Sydney’s true geographic centre, and 25km west of Sydney’s CBD.

It is one of the great public transport hubs, easily accessible to the bulk of New South Wales' population. Parramatta on the river is the site of the second oldest European settlement in this country. It boasts important historic buildings, modern cultural centres, The King’s School and Westmead Hospital.

For tourists, it is an easy stop on the way to the Blue Mountains and the west. A Modern art museum in Parramatta could still be run by the same management structure as the Art Gallery of New South Wales, interlinked in much the same way as the UK’s Tate Britain is in partnership with the Tate Modern, Tate Liverpool and Tate St Ives.

Unlike Sydney Modern, tied to the old gallery site, there would be fewer physical constraints when planning Parramatta Modern. Out west it is possible to think big.

It has been suggested that while there are obvious flaws with the campaign to build out towards the harbour, as A$10.8 million has already been spent the decision is irreversible. But when the total preliminary budget is A$400 million, the new building is more likely to cost at least A$500 million. In that context A$10.8 million does not seem very much.

There is no reason to confine iconic architecture to the CBD, and every reason to think on a grand scale when planning infrastructure for the majority of Sydney’s population. Parramatta deserves the best. 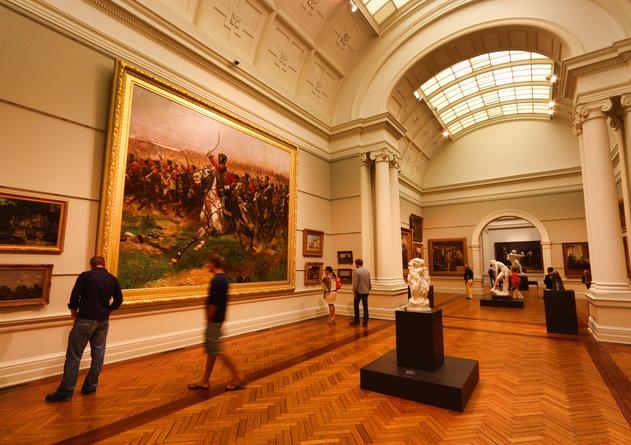