Is the latest visual campaign to stop the boats – in the form of a graphic novel – enough to counter asylum seekers' fear, panic and desperate need of humanitarian refuge, asks Phillip George. 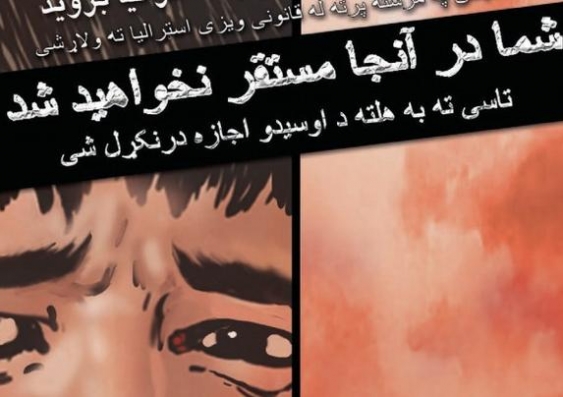 Department of Immigration and Border Protection

OPINION: The immigration department has added new contemporary imagery to the growing list of iconic works that surround the vexed issue of asylum seekers. Most Australians can already vividly recall media of the “children overboard“ photographs and images from the Tampa in 2001. The latest to be unveiled is a graphic novel depicting a journey from Afghanistan that has a detention camp as its final destination.

In the novel, we see a young Hazara man receiving his parents' savings, travelling to Pakistan’s Jinnah International Airport and arriving at a port (most likely) in Indonesia. There, he gives his parents' savings to a people smuggler only to end up in a tent somewhere in the South Pacific. End of graphic novel.

Shortly after then-prime minister Kevin Rudd’s announcement last July of his Papua New Guinea “solution” for asylum seekers arriving by boat, the Department for Immigration and Citizenship (DIAC) – now known as the Department of Immigration and Border Protection (DIBP) – released an image of a young Iranian girl appearing to be in distress at learning she would never be resettled in Australia.

The department said the image was intended to be seen around the world as a warning to other asylum seekers of what may happen to them if they catch a “leaky boat” to Australia. As was written at the time on The Conversation:

The history of Australian asylum seeker policy is studded with iconic if often distressing imagery.

While the photograph of the Iranian woman was an opportunity capitalised upon, this graphic novel is at a level of sophistication rarely used by DIBP. It is not simply a continuation of government propaganda. This is a well-researched, intelligently considered, emotionally crafted work with powerful graphics and it has a specific audience in mind.

The graphic novel presumably targets the Hazaras, an ethnic minority who make uparound 9% of the Afghani population. When the snow melts in Afghanistan and the new fighting season starts in the spring (March/April), the Taliban will assert their position throughout the country. It will be the first season with a reduced foreign troop presence in Afghanistan.

Last week, it was revealed that Afghan president Hamid Karzai was backing away from a deal with the United States and instead was preparing to negotiate with the Taliban. With the rise of the Taliban, the Hazaras are going to be under great threat. They will be looking for safety wherever they can.

This iteration of the Australian government campaign to “stop the boats” began under the previous government. The graphic novel has been on the Customs website since last year, according to a department spokesman. However, having this imagery come to light only recently highlights the low-key nature of the campaign as far as the Australian mainland is concerned.

To spread its campaign outside our Australian cocoon, a department spokesman told The Conversation that DIBP is:

… using a range of channels and languages, including television, radio and press advertising, social media, other internet-based communication tools such as blogs, as well as direct engagement through community liaison officers.

The photograph of the female asylum seeker, distressed after arriving at a detention centre, was presumably intended for Australian voters in the election campaign. It screamed “we are tough on asylum seekers”.

We can surmise, then, that this current campaign is not directed at Australians, safe inside our secure border. DIBP also points out that the campaign:

… will not be the mainstream advertising undertaken by the previous government, which saw full-page advertisements being taken out in major daily newspapers prior to and during the election campaign at taxpayers’ expense.

We still can, and ought to, ask the critical question. Is this method of graphic campaigning, targeting incoming arrivals in a sophisticated and visually arresting way, equal to an asylum seeker’s fear, panic and desperate need of humanitarian refuge?

Phillip George is an Associate Professor in the School of Media Arts, COFA.