The people behind the paintings

The unique stories of the artists behind the Papunya Tula paintings is the focus of a landmark new book by New South Global Professor Vivien Johnson. 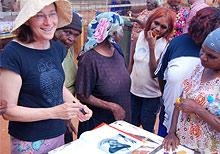 New South Global Professor Vivien Johnson has written a landmark book on the artists behind the now famous Western desert art movement that began over thirty years ago in the tiny town of Papunya in Central Australia.

Lives of the Papunya Tula Artists is made up of more than 200 biographies of male and female artists, including hundreds of candid photographs and key artworks.

Professor Johnson's fascination with Papunya began in the 1970s after seeing some Papunya paintings in an Alice Springs gallery. Since then she has spent several weeks every year travelling to Papunya, Kintore and Kiwirrkura talking to the artists and building the trust that has resulted in such an intimate and exhaustive study of their lives.

"I noticed there was a need for a scholarly and historical account of the Papunya Tula artists as individuals, as well as about their collective achievement," she says.

Maintaining accuracy was of utmost importance to Johnson who spent years cross-checking familial connections with genealogists to ensure consistency across the book. She also encouraged involvement from the artists who continually reviewed the manuscript and provided feedback.

"Reciprocity is an extremely important value in social exchanges in Aboriginal culture - if I was going to use their stories I wanted them to see this as their book and their history," says Johnson.

The book has been received with great communal pride in Papunya, Kintore and Kiwirrkura and has provided a renewed enthusiasm for younger artists to carry on the artistic legacy of previous generations.

"The Papunya Tula artists have made a huge impact on Australian art. They deserve a book on this scale that honours the artists and that will stand the test of time just as their paintings have," she says.

Professor Johnson recently curated Papunya Painting: Out of the Desert, an exhibition that drew well over 70,000 visitors to the National Museum in Canberra and the Australian Museum in Sydney.

Lives of the Papunya Tula Artists is published by IAD Press.