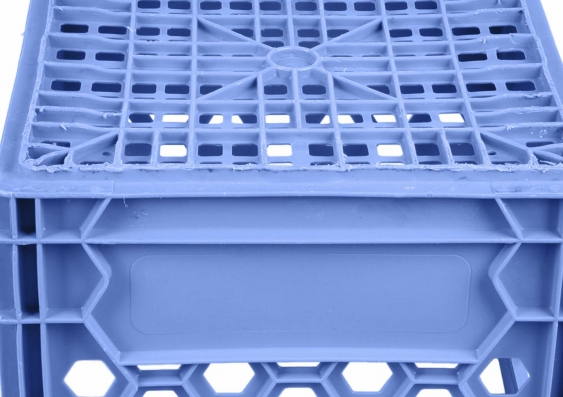 OPINION: Sydney’s Lord Mayor Clover Moore has turned me into a milk crate acolyte. Driving to work this morning, I screeched to a stop by the side of the road. Why? There was a blue milk crate lying in the gutter. Discarded. Disdained. Rest assured, the revered blue plastic object has been safely deposited in my boot.

As of 8.45pm Monday July 28, the imaginative significance of the humble milk crate changed for ever.

At that late hour, City of Sydney Council ratified the Public Art Advisory Panel’s decision to commission three major public sculptures, one of which is Hany Armanious’ enlarged blue milk crate to be installed at Belmore Park.

Over the next three to five years, the works will be installed in Sydney’s increasingly cosmopolitan city centre. When I spoke to Director of Design at Sydney City Council Bridget Smyth yesterday, she told me that the art brief was to address the topographical urban design challenges of moving east-west from the Botanical Gardens to the western Harbour and Barangaroo.

The potential improvement to “the experience of this short walk needed to be enunciated” and affirmed in the artists’ tender proposals. The selection was made by an eminent team of Smyth, along with art consultant Barbara Flynn and four of the Art Advisory Panel members, comprising Lisa Havilah, Anne Loxley, Janet Laurence and Richard Johnson.

The panel no doubt expected a degree of public outrage over the total A$7.7M price tag. After all, arts budgets, in our current neoliberal and economic rationalist climate, are often thought of as a guilty retail pleasure.

The tender is over, the cash is allocated, the artists are commissioned. What about education and health, I hear you cry? Should they not be priorities over art? The effects of public spaces on population morale and well-being, not to mention tourist dollars, have been well researched.

I foresee that this current public sculpture debate will bloom, then quickly dwindle, leaving us the great “mental health pleasure” of experiencing art – as a community.

So what do we all think about the individual chosen works?

In light of the number of electronic or digital-screen works being installed around the Broadway/ Sydney University inner city precinct (such as Jennifer Turpin’s “halo” light sculpture on Jean Nouvel’s Broadway building and an imminent work by John Tonkin on City Road), it is interesting that the three works chosen have a Modernist-inspired materiality.

Junya Ishigami’s “noodle doodle” Cloud Arch (pirctured above), over George St and totalling A$3.5M, refers to computational networks and flows of data information but is also a formalist, gestural mark: a line drawing in the sky.

The light rail will pass underneath its drawn form. In an email to me, art consultant Barbara Flynn wrote:

Permanence allows people to develop familiarity over time and in some cases deep attachments with works of art. The larger context is Council’s championing of public art and the creation of opportunities for artists citywide.

Hany Armanious’ A$1.7M blue milk crate in Belmore Park, near Central Sydney, refers to the history of the found object, the Duchampian re-purposing of readymade things, made aesthetic by its site-specific reinterpretation. By exaggerating the scale to 15x15x14 metres, Armanious’ cast fiberglass pavilion will introduce the Gothic arched forms of cathedral architecture.

In a phone interview with me, Armanious said, “I am absolutely thrilled. This is a permanent public work … moving into the future".

As to the logistics of his project and what some may interpret as a hefty price tag, there will be major engineering issues, as his sculpture is to be installed over a light rail tunnel. The proposed work is currently the subject of controversy as Melbourne artist Jarrad Kennedy alleges it is a copy of one of his own works.

What about the Tracey Emin work?

We all remember her as one of Charles Saatchi’s Turner Prize “art brat-pack". Her installation, My Bed, 1998 (above) which recently sold for £2.2M, an unmade bed with used condoms, suggested sexual and sleep narratives.

For me, despite this new A$2.1M work’s romantic title, With your thoughts in mind, the distance of your heart, it is the weakest of the three concepts. Bronzed little birds, placed here and there, along the East-west city corridor, sounds a little lame and too crafty.

Many commercial shop windows have recently sported a bird-cage or mock birds tweeting. But Director of Design, Smyth, counters that the 60 cast bronze birds fulfilled the design brief and will function “as a treasure hunt”, leading the public pedestrians along a “spatial sequence” in that east-west corridor.

Hopefully, kids will soon make Ishigami Cloud shapes with their dinner-time spaghetti, the big blue milk crate might bring soap-box politics back to the city centre and Emin’s Sydney reputation will sing anew.

I suspect the blue milk crate, a reflection of Australian humour and “make-do mentality,” will become a distinctly iconic Sydney image in the years to come.

Prudence Gibson is a teaching fellow in the Faculty of Arts and Social Sciences at UNSW.