James Joyce’s modernist masterpiece, Ulysses, has been brought to life at Bondi as part of UNSW’s annual Bloomsday celebrations. 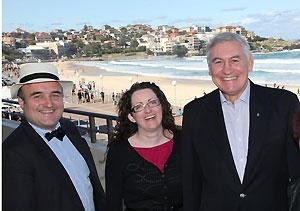 James Joyce’s modernist masterpiece, Ulysses, has been brought to life at Bondi as part of UNSW’s annual Bloomsday celebrations.

Actors, authors and politicians gathered at the Bondi Pavilions in an all-day celebration organised by UNSW’s Global Irish Studies Centre, which included a traditional Irish breakfast, music and readings from Ulysses.

Bloomsday marks the anniversary of the date Joyce set his book, which chronicles the passage of its protagonist, Leopold Bloom, through Dublin on June 16, 1904.

Ulysses is widely regarded as one of the greatest novels ever written.

Premier Barry O’Farrell opened the celebrations by highlighting Irish contributions to the arts, science and education in Australia.

Readers included NSW Minister for the Arts, George Souris, who read a humorous extract from the ‘Aeolus’ episode extolling the value of Greek culture, and media commentator and author, Mike Carlton, who read the closing pages of Joyce’s moving short story, The Dead.

Director of the Global Irish Studies Centre, Professor Ronan McDonald, said Ulysses speaks to all times with themes as relevant and resonant today as they were in 1922.

“Joyce’s masterpiece is a riotous, funny, democratic, empowering novel that honours the ordinary ‘everyman’. It describes the experience of being alive for everyone.”

The Global Irish Studies Centre chose the iconic beach location for the second year running because of its links to the Irish diaspora.

“Ulysses opens by the seaside and returns to it in many celebrated episodes throughout the book, so the Bondi setting is appropriate, but also because of the number of Irish backpackers and migrants that have made the area their temporary or permanent home,” said Professor McDonald.

The event was part of the Global Bloomsday Gathering, a live online global reading of James Joyce's masterpiece across 25 participating cities.

Bloomsday on Bondi was organised by the Institute and the Consulate General of Ireland.