UNSW and ABC Radio have collaborated on a major digital archive providing unprecedented access to the personal experiences of Australian veterans who served in Afghanistan. 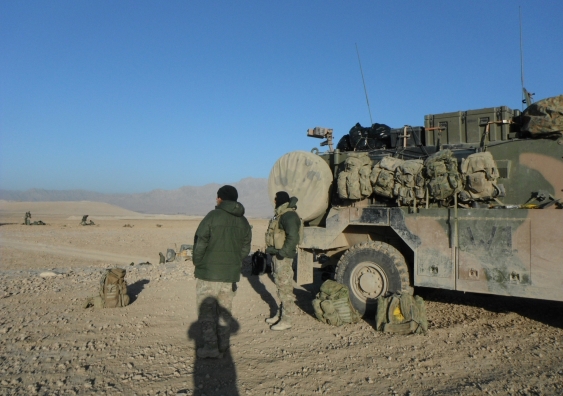 UNSW and ABC Radio have collaborated on a major digital archive providing unprecedented access to the personal experiences of Australian veterans who served in Afghanistan.

Retrospect: War, Family, Afghanistan explores the impact of the war on the lives of six former Australian Defence Force personnel and their families through six ABC radio documentaries, a dedicated website, and an immersive digital archive at UNSW’s iCinema.

Featuring previously unseen footage shot on location for ABC TV, personal interviews and striking portraits by internationally renowned photojournalist Stephen Dupont, the project is enhanced by personal photos and videos provided by the veterans. The result is a nuanced portrayal of how war is experienced in the era of digital communication.

The iCinema exhibition, to be opened later this year, will give visitors access to a vast digital database of veteran and family memories, which can be collated using artificial intelligence in UNSW’s award-winning 360-degree 3D cinema.

The ARC Linkage-funded project is led by iCinema director Scientia Professor Dennis Del Favero who says the project captures at a time when the ‘conventional letter home’ has disappeared.

“The current generation of defence personnel and their families do not produce the array of letters that so many archives of pre-21st century conflicts have – in this context, Retrospect is a world first innovation.”

Retrospect grew from iCinema’s iLetter project, which aims to create an interactive and immersive war archive to collate the next generation of ‘oral history’ for veterans of more recent conflicts.

Co-researcher and UNSW Canberra war historian Dr Craig Stockings said the interactive database and cinematic representation at the heart of Retrospect will revolutionise the archiving of military history.

“I can see my own graduate students, or even theirs at some point in the future, not trolling through old musty paper files, but navigating the types of databases developed by this project – and scholarship, understanding and insight will be the better for it.”

He believed the digital archive would also increase public understanding of veterans returning from places like East Timor, Iraq and Afghanistan who are not “elderly men in slouch hats”.

“The common picture that springs to mind when the word ‘veteran’ is used is seldom of an outwardly healthy and robust 20 year old more comfortable behind the console of an Xbox then at the bar in an RSL. Yet this is the modern veteran and Retrospect is helping provide a window into their world,” Dr Stockings said.

Former commander of the Australian Rotary Wing Group in Afghanistan Major Susana Henderson said she took part in the project because of its focus on families and those left behind.

“A huge amount is asked of families when a soldier deploys and often their story and struggle is not told or recognised,” she said.

“This is a great example of how iCinema and our artists and designers can team up with the ABC to dig deeply into archival material and turn that into a contemporary, media-savvy way of engaging with the stories of veterans and their families,” Professor Harley said.

Retrospect: War, Family, Afghanistan is produced by ABC Radio in collaboration with UNSW Australia, UNSW Canberra and the Australia Council for the Arts, and supported by the Australian Research Council’s Linkage scheme.