'Joyride', a visual interpretation of an original music score by composer Andrew Schultz has been selected for screening at the Melbourne International Animation Festival. 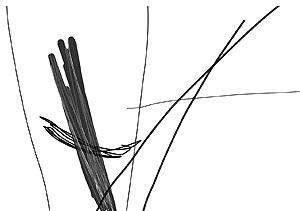 Joyride, a visual interpretation of an original music score by composer Andrew Schultz has been selected for screening at the Melbourne International Animation Festival (MIAF).

Alyssa Rothwell, animator and production lecturer in the School of the Arts and Media, created the hand-drawn vector animation in response to the instrumental work Ether Etude, composed by colleague and award-winning Australian composer, Andrew Schultz.

Schultz, head of the School, composed the piece for flute, clarinet and string quartet to be performed by Ensemble Offspring.

“I offered the piece to Alyssa because I enjoy collaborating with other artists and was interested in the potential of this piece to be explored visually in a dynamic and engaging way,” he said.

Joyride, which runs for just over two minutes, transforms the screen with simple black lines that dance in rhythmic formation, drawing music and vision into one combined movement.

Rothwell said she deliberately avoided using colour and texture in the animation, preferring to leave space for the music.

“Commercial animations are loaded with colour, movement and effects that manipulate how you think and feel,” she said. “Animation can be fascinating and engaging with just simple moving lines in play.”

The animator said Schultz’s composition, which alludes to the effects of ether and the gassy ether of the sky, was perfect and she didn’t want to “clomp around on it”.

For Schultz, the animation is a faultless interpretation of his music.

“Joyride is quirky, abstract and highly entertaining. The simple and economical lines become dramatic characters and then evaporate into the ether,” he said.

Rothwell has presented Australian Film Commission funded animations at the Pompidou Centre, Paris, and has created animation and digital backdrops for Theatre of Image productions at the Sydney Theatre and Powerhouse Museum.