Iconic images of Gough Whitlam’s 1973 visit to China and his groundbreaking links with Indigenous Australia form the basis of COFA's Making Change exhibition. 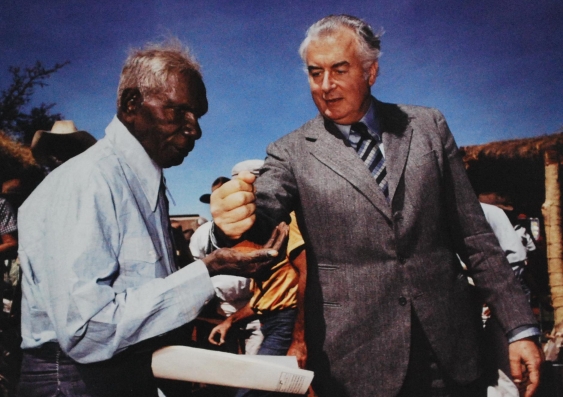 Iconic images of Gough Whitlam’s 1973 visit to China are part of a COFA exhibition celebrating the 40th anniversary of diplomatic relations between Australia and China.

Making Change, which opens at COFA next week, celebrates Whitlam’s role as the first Australian Prime Minister to make an official visit to China, heralding a new era of economic and cultural ties that now spans four decades.

The exhibition was a finalist in the 2013 federal government Australian Arts in Asia Awards, and showcases film and photo-based art by Australia’s foremost contemporary artists.

Surveying the artists’ perception and portrayal of modern Australia, Making Change incorporates archival photographic material from the Whitlam years, including his ground breaking 1971 visit as Opposition leader and again in 1973 as Prime Minister.

“The exhibition represents a move away from the historical Anglo-Celtic representation within Australian art, and redefines the cultural identity of the nation to reflect a multiculturally diverse and outward-looking society,” says co-curator, Felicity Fenner.

The collection was presented at the National Art Museum of China in 2012 where it attracted record audiences. Former Minister for the Arts, Simon Crean paid an official visit to the exhibition to further expand cross-cultural relations within the arts.

Making Change is produced and presented by the College of Fine Arts, University of New South Wales, (COFA), the Australian Centre for Photography (ACP), and the National Art Museum of China (NAMOC).