Opinion Why are so many arts organisations run by blokes?

There exist several barriers that prevent women from taking senior leadership posts in arts organisations, and the most significant is child-rearing, writes Joanna Mendelssohn. 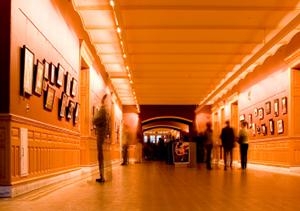 OPINION: One of my favourite paintings in the Art Gallery of New South Wales is Emanuel Phillips Fox’s Art Students. It’s a particularly notable series because all the Melbourne Art School students pictured are women.

In the late 19th century, as the first generation of women to go to school reached maturity, art school was seen as a ladylike alternative to more serious pursuits and so began the dominance of women in art studies.

Well over a century later women are still the majority of visual arts students, but the cream of the leadership positions in arts organisations remain firmly in male hands. In 2012, of the 98 students enrolled in the graduate Art Administration programs at my university, 86 were women. In the last two decades I have taught classes with 100% women but never a class with even 25% men.

When describing successful students there is an instinct to choose equal numbers from each gender. Where women students are in an overwhelming majority, dividing the spoils by gender means they are discriminated against. In a class with two men and 28 women, the visually different (i.e male) find it easier to have their names remembered. It helps to stand out in a crowd.

Opportunities and individual attention tend to engender confidence. As American social psychologist Amy Cuddy has shown, the kind of self-affirmative physical stance taken by baboons, alpha males and even Wonder Woman increases both testosterone and self-confidence.

Women graduates are more likely to apply for “realistic” secondary positions, and this is what they are given. Self-confidence is infectious. It is the hardest thing for a young artist to approach a commercial gallery about an exhibition, or a new graduate to think she may become an Assistant Director rather than an administrative assistant. Fortune is more likely to follow the bold than the shy.

In the first half of the 20th century the artist Margaret Preston became known as “mad Maggie” but her assertive personality meant that she was one of the few women artists to achieve a high professional profile for most of her career. Her quieter colleague,Grace Cossington Smith had to wait until she was over 80 to see a major exhibition of her work in a public gallery.

Women creative artists are now much better placed to achieve success than in the past. There is a critical mass of women exhibiting in commercial galleries and having their work selected for public collections.

It is also worth remembering that men who are non-assertive or from less than privileged backgrounds do not find success easily. Ralph Balson, who was only able to paint full time when he became an old age pensioner, spent most of his life in relative obscurity.

Because of the cost of childcare, the greatest barrier to women taking leadership in any field is the birth of children. Here the arts create an extra hurdle. Because our work time is other people’s playtime, the most important part of a working day may be between 6pm and 8pm. This is when exhibitions have their openings, when introductions are made and deals are quietly brokered in front of an exquisitely presented exhibition.

No employee who wants to be taken seriously can avoid working at that time, but it coincides with the jungle hour for young families. Unless they are in the most senior of positions, people working in the arts tend to have salaries that equate with genteel poverty. Most childcare centres close by six and nannies are expensive.

This barrier also affects those men who care for their young children but despite the huge cultural shift in recent decades, many arts organisations continue to model their approach to employment on the most conservative of male dominated organisations where family concerns are simply not a part of the equation.

State-run arts organisations also have an almost seamless relationship with power politics. This is understandable as their survival depends on the support of the rich and powerful. But as a result there is always a political element to every senior arts appointment and when politics comes into play it is always safer to go for the norm, to make an appointment in the same mould as the past.

Over the last two decades there have been a number of able, intelligent, women who have been appointed as second in charge of state galleries, but have failed to progress further. The recent round of Director appointments at the National Gallery of Victoria,Art Gallery of New South Wales and Queensland Art Gallery were all male. It is many years since the 1990s when Betty Churcher created a family friendly space at the National Gallery of Australia.

In those years it was not uncommon to see the young Andrew Sayers, then curator of Australian Drawings, pushing a stroller through the gallery after he collected a small child from day care. Over two decades later Sayers, now Director of the National Museum of Australia, has announced his resignation so that he can live in Melbourne where his wife now works.

Meanwhile, at the Art Gallery of New South Wales the Director, Michael Brand, is becoming known for his ability to delegate authority to other staff. Other than being a sound management strategy, this enables him to spend more time with his family. It may sound paradoxical but those men who show leadership in asserting the importance of spouses and children to their lives could well enable their female colleagues to do the same.