COFA graduate Nigel Milsom has won the 2012 Sulman Prize for his painting depicting the social isolation of gambling. 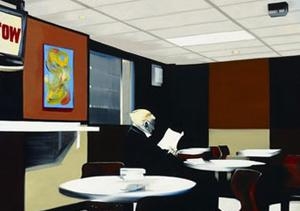 COFA graduate Nigel Milsom has won the 2012 Sulman Prize for his painting depicting the social isolation of gambling.

Milsom’s oil on linen painting, titled Judo House pt 4 (Golden Mud), explores gambling in every day life, “whether it be with one’s life, money, career or simply in the day-to-day decisions we all make,” Milsom explains.

He was inspired to paint the image after meeting a widowed man at a bus stop, whose only form of social interaction was a weekly trip to the leagues club, where he would bet on the horses.

Milsom says he aimed to capture feelings of “social loneliness” and mystery in his winning work.

The $30,000 prize, awarded by the Art Gallery of NSW, was judged this year by Susan Norrie. The Sir John Sulman Prize is awarded annually for the best subject/genre painting and/ or mural project by an Australian artist.

The exhibition runs concurrently with the Archibald and Wynne Prizes, at the AGNSW, until June 3.