The beauty of this exhibition is that while it keeps to its theme of investigating Australia’s Scottish legacy, it roams over the entire country, writes Johanna Mendlesohn. 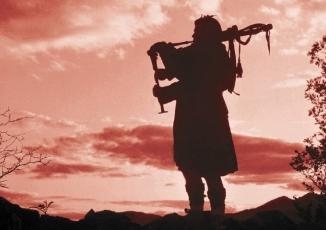 REVIEW: If there is one painting that shows the dilemma at the heart of For Auld Lang Syne, an exhibition devoted to images of Scottish Australia currently showing at the Art Gallery of Ballarat, it is John Glover’s Ben Lomond. Painted in about 1840 by an expatriate Englishman, it shows a romanticised vision of a tartan-clad family of Highlanders gathered around a fire.

Scotland in the Antipodes

The Ben Lomond of the painting is not in Scotland, but Tasmania, near Evandale in the north of the island. It was renamed by Scot settlers. The transplanted nature of the culture is emphasised by the kangaroo which is being carried to the feast.

This painting is a fantasy, but it sits uneasily with Glover’s other fantasy paintings of pre-European Tasmania. Glover painted many works similar in composition to Ben Lomond but he usually placed Aboriginal people, living in harmony with their land, at the feast.

Glover never saw Tasmanian Aboriginal people in such a happy state. He arrived in the colony in 1831, at the end of the Black Wars that saw many Tasmanian Aboriginal people killed, and others exiled to a slow, dispiriting death. The painting of Ben Lomond looks as though this Englishman saw the Tasmanian mountains as a possible idyll for exiled Scots, a concept that under the circumstances is, to say the least, awkward.

After George Augustus Robinson persuaded the remaining Indigenous people of Tasmania to go to exile on Flinders Island, the settlers at Bothwell commissioned the Scottish convict silversmith, Joseph Forrester, to make a loving cup presented to Robinson for the “successful conciliation of the Aborigines of this Island".

The cup, which is now in the collection of the Tasmanian Museum and Art Gallery is in the Ballarat exhibition, while Julie Gough’s moving video installation, The Grounds of Surrender (2011), which commemorates the last journey of the exiles, is on view just outside the entrance. Gough is a descendant of both Woretemoeteyenner, an Indigenous woman who spent her life on the Bass Strait islands, and those Scottish and Irish colonists who benefited from the dispossession.

The Scots in Australia have a mixed history.

The young Scot Sydney Parkinson accompanied Joseph Banks and James Cook on the Endeavour. He died on the voyage but left some of the most beautiful botanical drawings ever made.

On the other hand, the convict artist Thomas Watling is responsible for some of the earliest paintings of the infant settlement at Sydney Cove and of early life in the colony.

Both men fit comfortably into the standard narrative of Australian colonial history. More interesting are the images relating to the Scottish Martyrs, those radical followers of Tom Paine who became our first political exiles because they campaigned for the rights of man.

They stayed long enough to add some colour and movement to the early years of the colony – but it was another Scot, Lachlan Macquarie, who irrevocably changed the shape of the prison camp into a community with an optimistic future.

One of the great joys of the exhibition is also one of the more eccentric works on view – Governor Macquarie’s glorious gothic revival chair, carved in wood and clad in wallaby fur. He may be remembered for his legacy of town planning and enabling convicts to see themselves as future citizens, but his chair is a reminder that one of the complaints against him was a certain grandiosity.

What the Scottish explorers saw

The beauty of For Auld Lang Syne is that while it keeps to its theme of investigating Australia’s Scottish legacy, it roams over the entire country.

There are beautiful drawings and maps by Thomas Livingstone Mitchell who surveyed much of New South Wales and Victoria, including one of the Major Mitchell Cockatoo, modestly named after himself. There are works recalling the explorations of Sir John Forrest, who surveyed the route for the overland telegraph. He is commemorated by a portrait by Phillips Fox, painted in his corpulent old age, after he became Premier of Western Australia.

The most fascinating of these explorers was John McDouall Stuart who after several attempts, in 1862 crossed Australia from south to north, planting the British flag in the middle of the country at what he called Central Mount Stuart. The blundering white men, tramping through the land with their horses and their guns, were keenly observed throughout their entire journey by Aboriginal people, even though the intruders rarely saw them.

Stuart’s excursion became the subject of Aboriginal stories, passed down through generations. There is evidence of this in one of the most remarkable works in the exhibition, a boomerang carved by the Arrernte artist Jim Kite Alyelkelhayeka Penangke. He shows both the intruders on their horses and people concealed, watching them.

Kite was not born when Stuart’s expedition rode north, but in 1913 he was able to tell a journalist how the people had not realised at first that horses and their riders were two separate creatures and so were shocked when the men dismounted and the strange beings split into two.

It is easy to misinterpret events seen from a distance.

The great pro-Scottish sentiment of Victorian times, heavily promoted by the Queen herself, led to an outpouring of Caledonian fervour when her son Alfred Duke of Edinburgh, heir to the Duchy of Saxe-Coburg and Gotha, visited Ballarat in 1867.

The townspeople put on tartans and oversized sporrans to emphasise their Scottishness as they thought they were honouring the visitor’s heritage. The artist Nicholas Chevalier made some amusing drawings on the spectacle. The adoption of Scotland by English royalty is the reason behind the one jarring note in the otherwise superb book that accompanies the exhibition – a rather odd foreword by the current Prince of Wales.

I’m not sure what Robert Burns, that great poet of the Scottish vernacular who is commemorated in statues throughout Australia, would have made of this.

For Auld Lang Syne is on display at the Art Gallery of Ballarat until July 27.

Joanna Mendelssohn is Program Director, Art Administration, School of Art History and Art Education and Editor in Chief, Design and Art of Australia Online at UNSW. 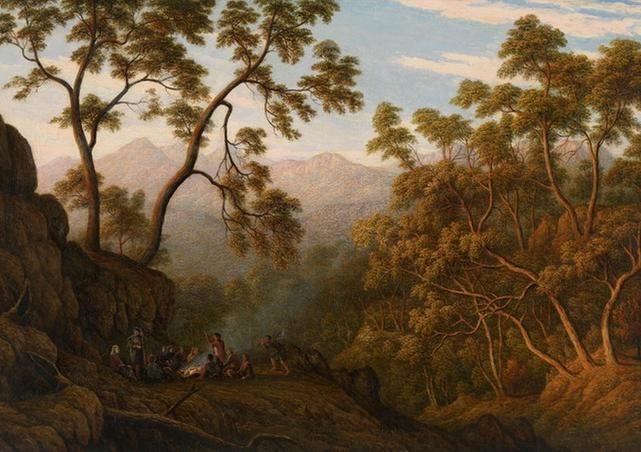