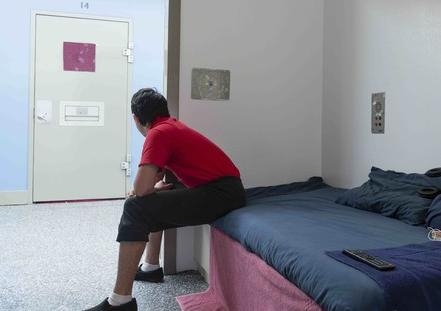 OPINION: I entered the secretive world of a maximum-security prison for children in Sydney's Western suburbs for four months earlier this year. My passport into this highly restrictive world was an artist residency organised by Campbelltown Arts Centre.

Reiby Juvenile Detention Centre caters for kids between 10 and 18 years of age at high risk and on long-term sentences. After discussions with the education team at the centre I was allocated a group of about 20 14-year-old boys to work with, seven of whom chose to join the project.

Upon entering the jail, all identifying possessions, keys, wallets, phones, were locked away in a tiny locker at reception. Materials bought into the project were itemised and counted on the way in and out. These lists became a daily ritual – three pens, a pad of paper, a thumb-drive with images (thumb-drives are contraband in jail but an exception was made for me), a battery, a camera cord and so on ...

Attention to detail wavered but invariably the larger and more materials you needed to bring in, the closer the scrutiny.

Once inside I was usually given about an hour with the boys in a small classroom watched by several minders.

Our first meetings were awkward. I had been briefed that these boys "loved art" but it quickly became apparent their experiences of art were relatively narrow and had focused on carefully defined tasks such as the decoration of images. My first attempts at an open drawing task ended in disaster with most boys calling for "time-out" and leaving the room.

After a few false starts we slowly began a dialogue.

Through the residency I hoped to challenge the institutional disempowerment these young men face. In our first project, Rooms, the boys "curated" their own living environment by producing oversize drawings to wallpaper the small beige and grey rooms they spent most of their time in. Completing this project was a long and complex process – the images had to pass several levels of bureaucracy (references to Tupac for instance were banned because they were seen to promote gangster culture) before we were eventually able to install them.

These boys are not allowed on the internet – let alone the social media sites that predominate in teenage culture. Researching ideas was difficult. Strangely we met almost half way – the boys' idea of youth culture was several years out of kilter and it caught my fading connection with the world of teens. The day of installation was a minor victory with the boys hanging out in each other's rooms (a rare social experience) and working together to wallpaper images on each other's walls.

Our next project was working on a collaborative video project Doing Time. The video was shot inside the courtyard of the detention centre and is an exploration of the experience of time through the eyes of four young people who have been prematurely forced to confront its gravity.

One of the challenges for this film was that we were not able to show the boys' faces. A key part of the project, then, was developing costumes that shielded the boy's identities at the same time as revealing things that were important to them.

Through a series of drawing workshops we created logos for their jackets that incorporated things they felt could act as a "shield" for their identity, including the Aboriginal flag, logos for major fashion and sports labels, symbols of their cultural heritage and other personal colours and drawings.

The film shoots were again a minor victory. We were allowed a few hours where the boys could escape the daily routine by mucking around with bikes and scooters and hanging around the courtyard like a regular bunch of kids.

The film had its first screening inside the jail on July 22. The release of the film was a complex and difficult process – it only just made it through various levels of bureaucratic mediation to be screened to an external audience. The sticking point was the masks covering the boy's faces which, though necessary to protect their identity, raised further concerns that they promoted gangster culture.

Doing Time was first exhibited publicly in August at The List, an exhibition at Campbelltown Arts Centre curated by Megan Monte. The List is a multidisciplinary arts project involving twelve newly commissioned artworks that reveal the collaborative experiences shared between contemporary artists and young people in Campbelltown.

Before entering the jail I knew that Aboriginal kids would be over represented in the young people I met inside.

According to Padriac Gibson, Senior Researcher at the Jumbunna House of Learning UTS, more Aboriginal children are being taken from their families into institutional care today then during the era when the removal of Aboriginal children was official government policy (roughly 1906-1969).

It was devastating once inside the jail to hear the Assistant Principal explain that almost 100% of the kids inside were Indigenous. Except for a boy from the South Pacific Islands, all the kids I worked with were Aboriginal.

Before the process began I asked that I not be told what crime any of the boys had committed. I felt they had been judged enough and I didn't want to add my voice to this. I do not intend to diminish the hurt that some people must be feeling because of these boys – I can only imagine they must have gotten up to something bad to end up in a maximum security prison when they were 14 years old. My time with these boys, however, convinced me a greater crime was being perpetrated by locking them up.

Most of the boys described jail as a stabilising factor in their lives, somewhere they actually got to go to school, be fed, have a place to sleep.

Yet all were emphatic that "you don't want to be here", it was a place of loneliness, isolation, crushing boredom and anxiety. As one boy explained "you always have to watch your back in here".

The time I spent inside showed me that a generation of Indigenous young people are growing up in jail, without access to the outside world, their families and their freedom: I can only imagine the consequences of this will be as dire as those of the Stolen Generation.

In a few years these boys will leave jail as young men and I will understand if they are filled with rage for a system that stole their childhood.

Doing Time was created as part of a four-month residency at Reiby Juvenile Detention Centre and was exhibited as part of an installation The Boys Home, with photo documentation of the residency, for the exhibition The List, Campbeltown Arts Centre.

Zanny Begg is a lecturer at UNSW Art & Design