Professor Andrew Schultz’s “big and bold” symphony celebrating Canberra’s architecture and landscape will be the anthem for the capital’s centenary celebrations. 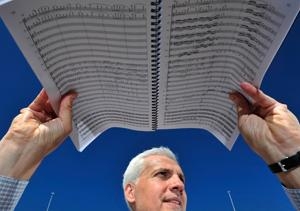 Professor Andrew Schultz’s “big and bold” symphony celebrating Canberra’s architecture and landscape will be the anthem for the capital’s centenary celebrations.

Symphony No. 3 – Century is an original composition that took Professor Schultz two years to compose. It will be performed by the Canberra Symphony Orchestra in front of Old Parliament House during the One Very Big Day celebrations next week.

One of Australia's foremost contemporary classical composers, Schultz spent 12 months visiting Canberra and researching its history before he started work.

Professor Schultz, head of UNSW’s School of Arts and Media, said he knew when he was commissioned to compose the symphony that it had to be “big and bold”.

“I wanted it to be a reflection of Canberra’s landscape and its broad and dramatic vistas,” the composer said.

He was inspired by Walter Burley Griffin’s radical plans for the city and the region’s dramatic natural environment.

"Griffin's original plans show a preoccupation with powerful artistic and social ideas that are still compelling and inspiring 100 years on," Schultz said.