One of Australia’s leading composers, Paul Stanhope, has been appointed the new Artistic Chair of the Australia Ensemble, UNSW’s resident chamber music group. 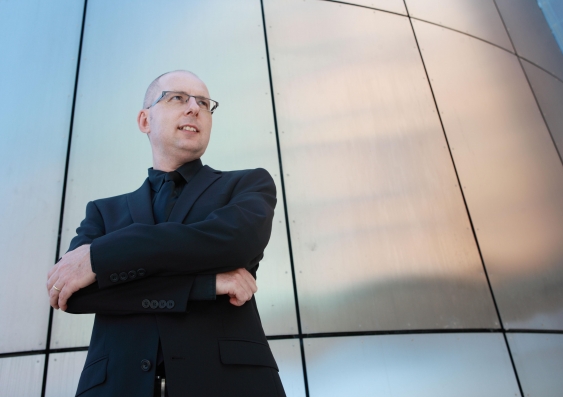 One of Australia’s leading composers, Paul Stanhope, has been appointed the new Artistic Chair of the Australia Ensemble, UNSW’s resident chamber music group.

Stanhope is a composer of international standing with prominent works performed in the UK, Europe, Japan, and both North and South America. After studying with Andrew Ford, Peter Sculthorpe and the Head of UNSW’s School of Arts and Media, Professor Andrew Schultz, Stanhope was awarded the Charles Mackerras Scholarship to study at the Guildhall School of Music in London. He has been Musical Director of Sydney Chamber Choir since 2006 and currently teaches composition at the Sydney Conservatorium of Music.

The composer said he plans to work collaboratively with the Ensemble to forge new directions while continuing fine performances of masterpieces from the chamber music repertoire.

“I am delighted to have been appointed as Artistic Chair of the Australia Ensemble, which is not only one of Australia’s finest chamber ensembles but it’s one of the world’s most admired groups of its kind,” he said.

Stanhope will replace Emeritus Professor Roger Covell, co-founder of the Australia Ensemble and founding head of the School of Music and Music Education. Covell retired this month after 34 years as Artistic Chair and 47 years at UNSW.

Stanhope congratulated Professor Covell on his “remarkably sustained and successful” tenure with the Ensemble.

“Professor Covell has overseen the establishment and growth of a remarkable institution in the Australian cultural scene,” said Stanhope.  “Commissioning new works from Australian composers has been integral to this and is a tradition that I intend to pursue with enthusiasm. It is a wonderful legacy and a position of strength on which to build into the future.”

The Australia Ensemble, widely recognised as the country's finest chamber music ensemble, was founded in 1980 following a proposal to the University by Roger Covell and Murray Khouri. Consisting of seven of Australia's leading instrumentalists, the Ensemble engages other outstanding musicians to present unusual and varied groupings of performers as well as the standard chamber music repertoire. The core activities of the Australia Ensemble are the annual subscription season and free concert and workshop series at UNSW.

The Ensemble's 2014 Subscription Series - described by Professor Covell as a “starry sky of masterpieces" - starts on Saturday, 15 March at UNSW’s Sir John Clancy Auditorium. Click here to see the program.