Opinion Our duty to look: why censoring press photos is wrong

Is the Vivid festival just about light and colour and bling, or is it also about ideas and images that challenge us, asks Phillip George. 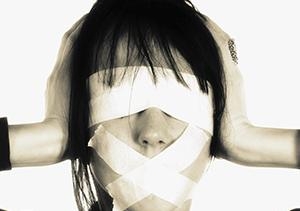 OPINION: When Destination NSW censored an outdoor photography exhibition meant to appear as part of the Vivid Sydney festival, they offended more than just the photographers who risk life and limb to take these “distressing” pictures.

They offended anyone with a sense of moral responsibility to face uncomfortable truths about wars we helped create, disasters we must live through and poverty in our own backyard.

Destination NSW, an arm of the state government and presenter of the Vivid Sydney festival, has asked that some of the images meant to be projected in public at night as part of the Reportage photography festival be removed from the outdoor show, and displayed only at an indoor exhibition.

“What we’re saying is there is a time and a place,” the CEO of Destination NSW, Sandra Chipchase was quoted as saying. “We just don’t want violence, dead people or anything that could distress people. In that public domain area it’s about entertainment and engagement.”

If it’s the tender eyeballs of children Chipchase is worried about, shouldn’t we ask ourselves how many six-year-olds are likely to be wandering around Circular Quay at night anyway? I don’t know if we will have very many children completely traumatised by seeing those images. And we had only last week a guy standing in London with bloody hands and a hatchet and that was all over the news.

The question is: is Vivid festival just light and colour and bling and Disneyland and pretty lights on a wall? Or is it also about ideas and being challenged by them?

Reportage is a representation of history and narrative of our time. Many photographers have taken enormous risks to record that history for us.

What I find truly reprehensible is the censoring of images of wars we helped to start. We are obligated to see this war. We joined those invasions, we went in with our allies into places like Afghanistan and Iraq. To join the invasion and not see the images of the repercussions of that is morally objectionable. We need to see what we have done.

Images are very powerful currency in this world. Those iconic shots of Vietnam probably stopped that war.

It’s not just images of war — photographs of poverty, political conflict, natural disasters and even pregnancy have been censored from the public exhibition.

I understand how Vivid is supposed to be showing Sydney in this joyous, wonderful way, bringing light into the dark days of winter. But they should also be trying to bring in some reality, saying, ‘Look at this aspect of our world as well.’

Some of those aspects of our world may be uncomfortable for middle class Australians, but they are also issues that we need to address.

To pull a photo depicting a natural disaster is just bizarre. We are seeing this one-sided vision of the world, all the good and none of the bad. Australia in the dome. We already live in an isolated part of the world and now we are trying to isolate ourselves even further from reality.

The show will go on in an indoor gallery, even though some artists have pulled out after the way this has been handled. But it is a real shame the full show will not be seen outdoors by people who really have a duty to look.

The world we live in is driven by images and the representation of history is critical. Photography freezes a moment in time and history and we relive it again and again.

Photography is extremely powerful and we need to give it due respect.

In fact, it’s not the photographs themselves that are distressing; it’s the censorship.

Phillip George is an Associate Professor in the School of Media Arts, COFA.