UNSW switches on at Vivid Sydney

Two unique outdoor art projections developed at UNSW will light up as part of the Vivid festival, opening this Friday. 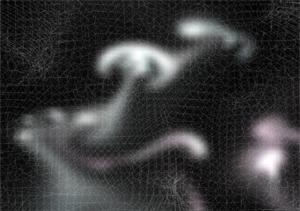 Two unique outdoor art projections developed at UNSW will light up this week as part of the Vivid festival.

As pedestrians walk past the large-scale installation, infrared light sensitive cameras track their movement, which is projected onto screens as swirling charged particles and dyed fluid.

“The movement is conducted in real-time, allowing for prolonged user-engagement with the installation,” says Miller, who lectures in COFA’s School of Design Studies.

Miller has been creating interactive art installations for over six years, and has had his work exhibited in numerous spaces across Sydney and Shanghai.

Commissioned by the festival, Plasma_flow has been designed specifically for the Cleland Stores site, which is one of Sydney’s earliest surviving commercial buildings, dating from 1862.

Alter Ego is an exploration of “confronting our own reflection, our alter ego”, explains Alexander, who has collaborated with a video artist, choreographer, composer and six performers to create the new media theatrical production, playing at Walsh Bay.

Incorporating Alexander’s love of theatre, it is the only installation to use live performers.

Alexander’s inspiration for Alter Ego was ignited by her PhD research on theatre and new media, in the Faculty of Arts and Social Sciences.

Vivid Sydney: A Festival of Light, Music and Ideas is on between May 25 and June 11.