Video of a Christian congregation swaying together in song has won COFA student, David Capra, recognition as an emerging artist in this year’s Blake Prize for Religious Art. 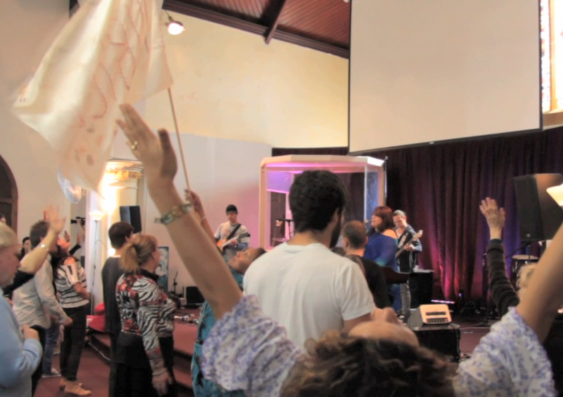 Video of a Christian congregation swaying together in song has won College of Fine Arts (COFA) student, David Capra, recognition as an emerging artist in the 62nd Blake Prize.

Capra was awarded The John Coburn Emerging Artist Award for Year of Jubilee, which depicts banners, handmade by the artist, being waved in a Sunday morning service at Jubilee International Church in Sydney’s eastern suburbs.

The John Coburn award ($5,000) was introduced to the Blake Prize for Religious Art in 2007 as a way to encourage emerging artists to challenge their art practice.

The 62nd Blake Prize for Religious Art is only the second exhibition to be presented at Galleries UNSW at COFA. The new public art space opened its doors in August.

Capra said he was introduced to the “extraordinary, dynamic church community” featured in his winning video by friends.

“Growing up I was exposed to a lot of different faiths and that has really informed my artistic practice,” says Capra, a Masters student at COFA.

The banners featured in the video are also on display and feature embroidery and hand-sewn images from the Wizard of Oz, including the cowardly lion morphing into the Southern Cross, referencing Australia’s national flag.

Capra says The Wizard of Oz shares themes with Christianity.

“There are similar themes to the bible like good triumphing over evil. The cowardly lion represents the Lion of Judah, King David’s tribe in the Old Testament.”

The artist says banners are significant in some churches, playing an important part in worship and celebration.

“They relate to the catholic term ‘intercession’, which is a concept I’ve been researching in my Masters. Intercession means anything that results in healing, like speaking in tongues and intercessory dance. I work in performance and these ideas feed into that,” says Capra.

The award adds to a long list of achievements by the young artist. In 2012, Capra was awarded an Australian Postgraduate Award (COFA) and an Australian Council for the Arts New Works Grant. In 2011, he was a finalist in the Helen Lempriere Travelling Scholarship and curated High and Lofty: The Ecclesiastical Banner Project (Parramatta Artists Studios). His work has been presented by Performance Space, Tiny Stadiums Festival and the Museum of Contemporary Art.

The 62nd Blake Prize ($25,000) was awarded to internationally renowned South Australian artist, the late Trevor Nickolls, for his painting Metamorphosis, inspired by the transformation of the physical being into the spiritual.The artist passed away in 2012 at the age of 63. It is the first time in the history of the Blake that the prize has been given posthumously.

The Blake Prize is one of Australia’s longest standing and most prestigious art prizes, which explores the religious and the spiritual through art. The finalist selection of 73 artists included COFA students Ramesh Mario Nithiyendran and David Capra, COFA lecturers Ben Rak and Joan Ross and COFA PhD candidates, Susanna Strati and Abdulla Mi Syed.