US Ambassador-at-Large Stephen Rapp has told a UNSW audience the Assad regime's penchant for documenting its criimes means “justice will arrive” for Syrians. 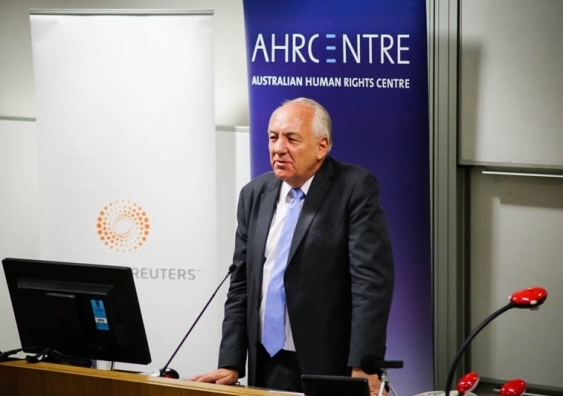 US Ambassador-at-Large for War Crimes Stephen Rapp has told a public lecture at UNSW that “justice will arrive” for Syrians, who have suffered atrocities far worse than in most conflicts.

Speaking on the topic “Achieving justice when courts are not yet able: The challenge of Syria”, Ambassador Rapp said “when a conflict is happening, many say that’s not the time for justice”, but warns that the day will come for the Assad regime.

He said the regime is “document crazy”, leaving a paper trail that will make justice ultimately possible.

Ambassador Rapp said there are photos of 11,000 civilian tortured corpses taken by a former military photographer and more than 800,000 pages of documents.

“I learned as a prosecutor that you need twice as much evidence as you think and you need more for war crimes,” said Ambassador Rapp. “We are getting that in Syria.”

He says the crimes committed in Syria are worse than in many other conflicts, with doctors and hospitals more likely to be attacked than civilians.

Since he took up the role five and a half years ago, Ambassador Rapp has been credited for seeking practical ways to advance the cause of accountability for mass atrocities, exploring a host of options for prosecuting Syrian rights abusers outside Syria and enhancing American support for the International Criminal Court.

Previously, Ambassador Rapp served as Prosecutor of the Special Court for Sierra Leone. During his tenure, his office won the first convictions in history for recruitment and use of child soldiers and for sexual slavery and forced marriage as crimes under international humanitarian law.

“The experience of bringing other war criminals to account creates the means for justice in places like Syria,” says Ambassador Rapp. “When I meet Syrians I tell them with confidence that … justice will arrive.”

Ambassador Rapp, who will soon step down from the role within the US State Department’s Office of Global Criminal Justice, said even the arrest of very elderly alleged war criminals, such as the recent case of a 93-year-old German man for alleged crimes committed during the Holocaust “sends a message” to the perpetrators of human rights violations.

“If you commit these crimes, there is no rest in this life, even 70 years after the event.”