It’s the first – and most popular – online free legal resource in Australia and this year marks its 20th anniversary. 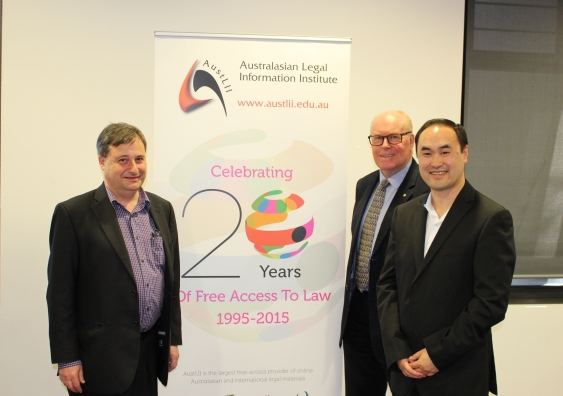 It’s the first – and most popular – online free legal resource in Australia and this year marks its 20th anniversary.

“When we set out, we didn’t have any reason to suspect its influence would spread so far for so long,” says UNSW Professor Graham Greenleaf of the Australasian Legal Information Institute (AustLII), which he co-founded with Professor Andrew Mowbray from the University of Technology, Sydney in 1995.

“It began because we were frustrated that there was a monopoly on computerised legal information,” he says. “The government used crown copyright over legislation and case law to limit free access to the law. Our intention in creating AustLII was to provide free access to the Australian public to the essential legal information needed for the rule of law and democracy to function effectively.”

While most current legal information is able to be accessed online, AustLII is still tackling a backlog of information from the past.

“Over the last five years, we have tackled more than any other country how you digitise a country’s whole legal history,” says Professor Greenleaf, who notes that the earliest cases on AustLII date from European settlement in 1788. “There are now all sorts of people who are interested in what is on AustLII, from lawyers to family historians. A case decided in the early 1900s can still be important as a precedent.”

AustLII has always been keen to pursue the provision of free access to the law internationally and beginning in 2000 with the British and Irish Legal Information Institute (BAILII) has helped to establish similar LIIs throughout Asia, Africa, and the Pacific, in partnership with local organisations and using the software platform it has developed. Most of these LIIs now operate independently. One of the most significant international milestones was the work done in the Pacific from 2001 to establish PacLII, in cooperation with the University of the South Pacific (USP) Law School.

“Before this, there was no access to law reports in the Pacific,” says Professor Greenleaf. “That was the part of the world that had the fewest resources. That work was a watershed, as we could then show other disadvantaged parts of the world how we could assist them with our approach and technology.”

Later, this work was broadened into a number of free-access portals in cooperation with many partners: AsianLII (all Asian countries), CommonLII (the common law world), and WorldLII (all global partners).

At an anniversary lunch organised by the eResearch Co-ordination Group to mark the occasion, the Dean of UNSW Law Professor David Dixon congratulated the Institute on its success.

“AustLII is now used by all lawyers in Australia, as a matter of daily routine,” says Professor Dixon. “Consequently it faces the problem of being taken for granted because its use is so ubiquitous and that’s a continuing challenge because it relies for its funding on charitable contributions from all its users, including the legal profession.”

A retrospective Research@UNSW publication recently featured AustLII as one of its '10 Innovations that changed the world'.

Research online: why universities need to be knowledge brokers