Volatility in stock markets has increased dramatically thanks to the fear around COVID-19. Investors should therefore consider these three questions to get a better grip of the situation, says a UNSW expert. 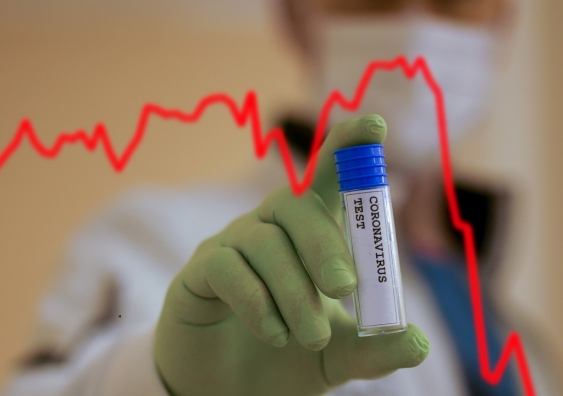 Volatility in stock markets has increased dramatically thanks to the fear being whipped up around COVID-19. Photo: Shutterstock.

We are currently experiencing the most uncertain and harmful times since 2008, or the Global Financial Crisis (GFC). The threat to our everyday lives is unlike any situation most of us have ever experienced, limiting our work, travel, and social interactions. The impact COVID-19 has had on the world is without question, but fear and uncertainty are playing a large part too. This is especially evident in the financial markets, where uncertainty has reached and exceeded 2008 levels.

The VIX index, which is a measure of volatility derived from options on the S&P 500, the benchmark for US stock performance, exceeded 80 per cent recently. To give that some perspective, the historical average for the VIX index is around 20 per cent, and over the last 10 years, it has averaged closer to 15 per cent. Post the GFC we had been living in one of the most stable and highly performing markets in history. Even when there were interruptions to the placid bull run of the past decade, the interruptions were short-lived.

The most severe of these interruptions was the sovereign wealth crisis in August of 2011, when VIX exceeded 40 per cent. That uncertainty, and the price drop in the markets, which was close to 20 per cent, had significant financial implications of the possibility of another GFC, but that uncertainty, and the stock market losses were gone by the end of the year.

How fear leads to bottom ticking

I bring this period up because only a few weeks ago, it was the most relevant comparison to what we were experiencing. The threat of financial disruption due to country bankruptcy felt very similar to the disruption that slowing production caused by COVID-19 was causing. Then something changed … you watch it on the TV, feel it on the streets, and hear it from people all around.

Economic uncertainty is problematic because it becomes about liquidity and cash flows. In 2008 there were real and valid concerns that the financial system couldn’t recover from the imbedded leverage that had been compiled in the credit markets. The fear there was that the whole system would collapse under this weight. The central banks stepped in and we were able to recover, but the potential reality of financial ruin was real. Many investors sold when this fear and panic were highest and unfortunately, sold at the worse times. In financial slang we call this “bottom ticking”.

We are seeing similar stock market selloffs now as in 2008, but why there is as much fear is not as clear. It is certainly palpable, but it is not clear.

What is causing this panic that is mimicking GFC style financial behaviour, and should we be having those fears? Let’s play point/counterpoint with some current questions that are driving behaviour.

Point: We don’t know
Counterpoint: It doesn’t matter, because it will.

The fear in the stock market is the same as in 2008, but I am not concerned about the time to recovery or the long-term prospects.

Point: Because COVID-19 will cause irrefutable harm to the financial system
Counterpoint: COVID-19 is a short-term interruption that will affect some more than others, but it is only short-term. People are acting irrationally.

Three key questions, three very different responses. Which one is right? Only hindsight can tell us which, but we know in general what the majority of people are feeling. This is why this feels like 2008 – and not 2011.

For those concerned that the timeline for COVID-19 recovery is not clear, that government bailouts will not work, and as stock markets keep falling this only adds to their uncertainty. The extent of the potential financial damage is incalculable for them – and the fear that many companies could go bankrupt, people will lose jobs, and we will enter recession/depression is real. Yet all of this is still unclear. Fear drives their decision making because of the uncertainty. Consequently, it leads to a liquidation of assets because short-term concerns override long-term rationality: high chances of “bottom ticking”.

For those that are able to look beyond the current uncertainty, they will see the world differently, but not necessarily correctly. The stock market may continue to fall, we may enter into a recession, and there will be job losses. However, their choices are not driven by fear.

You have to make a choice

I personally fall into the category of not having much fear. I lived and traded through many financial market concerns, and this doesn’t feel like 2008 to me in terms of financial risk. The financial system does not have the same embedded leverage, companies have strong balance sheets, and there are less liquidity concerns. The fear in the stock market is the same as in 2008, but I am not concerned about the time to recovery or the long-term prospects. It also doesn’t mean I expect a quick recovery, or that we have seen the last of the selling. It is just that the daily woes in the market don’t cause me anxiety.

Over the past 10 years we have become a little complacent, a little too sure about the stock market performance, and that it should always go up. The longer we get from a large market correction, the more certain we become that no correction will take place. When a correction comes, it shocks people’s expectations and invalidates beliefs. The more it falls, the more it causes concerns.

Yet stock market corrections are a part of financial life, and we go through many in our lifetime. How you react in those situations will greatly impact your future savings. Don’t allow fear to drive your decision making. Fear in the financial markets when the damage is already done is counterproductive. Many who sold at the trough of 2008 paid a heavy price. Don’t replicate that same mistake.

Dr James Doran is a Senior Fellow and Associate Professor in the School of Banking ＆ Finance at UNSW. For more information contact James, follow him on Twitter at @volprofessor or read Volatility as an asset class: Holding VIX in a portfolio (J Futures Markets. 2020; 1– 19).