The Abbott government’s strategy to treat asylum seekers who arrive by boat so terribly that they give up, is no model for a pluralistic Europe that values human rights, argues Gabrielle Appleby in the New York Times. 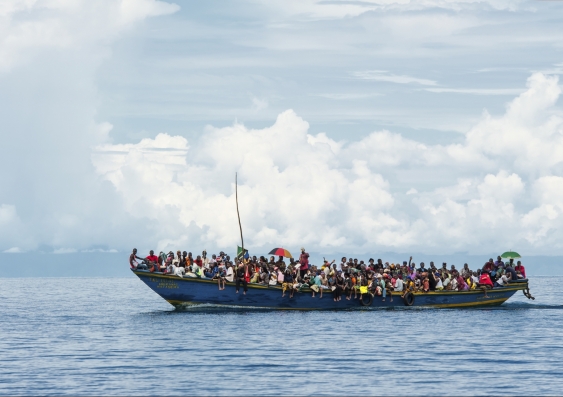 OPINION: In April, after the deaths of nearly 900 migrants attempting to reach Europe by boat, Australia’s conservative prime minister, Tony Abbott, urged European governments to adopt his country’s hard-line stance. The sentiment echoed a comment he’d made weeks earlier: that only his administration could resist “the cries of the human rights lawyers.”

The Abbott government’s strategy is to treat asylum-seekers who arrive by boat so terribly that they simply give up. Unconstrained by a bill of rights, Canberra has implemented a suite of harsh policies to this end. And now Parliament is considering two bills that could further toughen the country’s stance.

Central to Australia’s policies is the navy’s authority to intercept and return boats carrying asylum-seekers to countries like Indonesia, where they live in legal limbo, and Sri Lanka, where they may face government prosecution or worse. Those who do reach Australian territory are sent to privately run detention centers on the impoverished Pacific island states of Papua New Guinea and Nauru, where conditions are notoriously poor. As of March 31, 124 children were in immigration detention in Australia; 103 on Nauru.

Canberra spends millions publicizing these policies abroad: Newspaper ads, posters and even a TV movie warn those desperate enough to attempt the hazardous boat journey that they “will not make Australia home.”

Last September, in return for $31 million in development assistance, Cambodia agreed to accept refugees held on Nauru, provided they consented to the transfer. Refugees have been told of Cambodia’s “wealth of opportunity,” and offered resettlement packages in exchange for volunteering. But the pitch is a fantasy. In November, Human Rights Watch reported on Cambodia’s failure to support refugees already living there; the Office of the United Nations High Commissioner for Refugees has also expressed concern about Cambodia’s treatment of asylum-seekers.

Canberra, undeterred by the human cost, is pushing legislation that would further entrench these programs. One bill, likely to be voted on this month, would make operational a permanent Australian Border Force in the Department of Immigration. To be fully established by July, this force would oversee the interception and return of boats carrying asylum-seekers; its commissioner would have the same standing as the chief of the Australian Defense Force.

This heightened national security presence would make it easier for Canberra to avoid releasing information on attempted boat arrivals. The government already has a history of invoking the need to protect “on-water” operations to maintain secrecy in its immigration enforcement. In 2013, Scott Morrison, then the immigration minister, refused to answer questions in Parliament about a reported boat arrival, claiming this would jeopardize a “military-led border security operation.” In April, the UNHCR expressed concern over reports that the Australian Navy had turned back a boat carrying 46 Vietnamese asylum-seekers, allegedly rejecting their applications at sea following expedited assessments. Immigration Minister Peter Dutton initially declined to comment, citing “operational matters.” The government has since confirmed the incident, but disclosed no details on the assessments.

The second piece of legislation before Parliament would give officers in Australia’s privately run immigration centres exceptional powers to use “reasonable force” against detainees, effectively with impunity. This would be authorized not just to protect the life, health or safety of others, but to “maintain the good order, peace or security” of a facility. These powers, possibly involving lethal force, could be invoked to suppress legitimate, non-violent protests.

Officers deemed to have utilized force “in good faith” would receive legal immunity. These powers would exceed those of prison guards, who are not protected if they use excessive force. In a statement to the Senate, Stephen Charles, a former judge on the Supreme Court of Victoria, warned that this legislation would effectively enable detention centre personnel to “beat asylum-seekers to death.”

Conditions in Australia’s immigration detention centres are already dire. Last February, an Iranian asylum-seeker, Reza Barati, died of head injuries sustained during protests at a facility in Papua New Guinea. Reports by the Australian Human Rights Commission and the government reveal allegations of sexual abuse and physical assault, and high rates of self-harm among detainees, including children. In recent weeks, detainees at a facility in the Northern Territory protested and committed self-harm to prevent their transfer to Nauru.

What’s needed is a radical overhaul of Australia’s detention practices — not a legislative Band-Aid that increases the potential for violence.

Australia’s harsh stance is best explained by domestic political expediency. In 2001, Prime Minister John Howard refused to allow more than 400 asylum-seekers rescued by a Norwegian cargo ship to land on Australian territory. Though unpopular internationally and in the Australian press, that decision boosted Mr. Howard’s coalition government and contributed to his re-election that year. Likewise, Mr. Abbott’s promise to “stop the boats” was central to his successful 2013 election campaign.

In January, a poll by an Australian media research firm found that 58% of Australians considered the country’s position on asylum-seekers either appropriate or too soft; only 26% thought it too tough.

Paradoxically, Australia seems to have no problem extending protection to refugees who apply through regular channels. And leaders on both ends of the political spectrum have recently advocated for economic and population growth in northern Australia. With a national population of 23 million in a country roughly the size of Europe, it’s not that Australia can’t support more people: It just doesn’t want those people to be asylum-seekers arriving by boat.

This attitude may perhaps be understood as a dismal legacy of the “White Australia” immigration policy, in place from the country’s federation in 1901 until its final vestiges were dismantled in the 1970s. Under this doctrine, a range of legislation aimed at keeping out non-Europeans promoted white homogeneity in the name of social and economic security. Canberra’s call to “stop the boats” may resonate because it taps into the same well of xenophobia that enabled “White Australia” to persist.

As Europe revisits its immigration policies, it should eschew the Abbott administration’s hard line on people arriving by boat. And Canberra has an obligation to reverse course, beginning with the legislation currently before Parliament. Australia must start responding responsibly and with compassion to the challenges of protecting asylum-seekers, including those who come by sea.

Gabrielle Appleby, an associate professor in UNSW Law, co-directs The Judiciary Project at the Gilbert & Tobin Centre of Public Law.

This opinion piece was first published in The New York Times.