Burnside's refugee warning: 'Chance bludgeoning the reputation of this country'

Australia is seen as “cruel and selfish” for its treatment of asylum seekers, barrister Julian Burnside has told a packed UNSW auditorium. 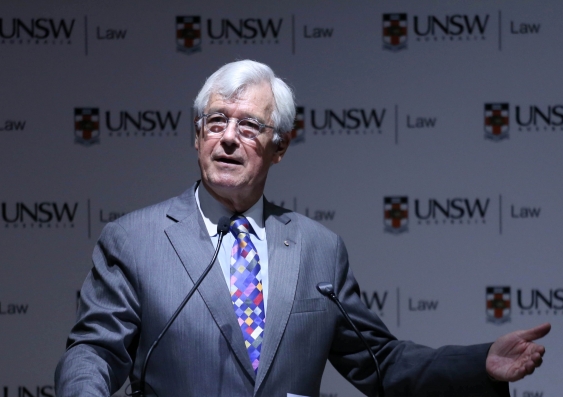 Leading barrister Julian Burnside has told a packed UNSW audience that Australia is seen as “cruel and selfish” for its treatment of refugees.

“Chance is bludgeoning the reputation of this country,” Mr Burnside told the audience at UNSW Law’s annual Hal Wootten Lecture. The human rights advocate said Australia had betrayed the principles it once stood for and "it will take a long time to recover".

Mr Burnside also told of the personal journey that galvanised his support for the issue.

“There was the case which, for me at least, forever changed my view,” said Mr Burnside, of the attempted suicide by hanging of one asylum seeker, an 11-year-old Iranian girl in 2002.

While she had been known to have mental health problems and had been moved to Maribyrnong in the western suburbs of Melbourne to get support, she had not received psychiatric care.

Supporters who turned up shortly after the attempt were sent away because it happened out of visiting hours.

“If fate bludgeoned that family beyond endurance, it bludgeoned my life onto a new track that night,” said Mr Burnside, who was awarded the Sydney Peace Prize last year for his advocacy. “It is a very sad thing to discover that your country has betrayed the principles it once stood for. I learned that lesson that night.”

The girl spent the next year in a child and adolescent mental health unit, until she was well enough to be put back in detention.

Mr Burnside also told of a current case of a five-year-old Iranian girl who has been attempting suicide in Darwin, for fear of being returned to detention on Nauru.

In the case of Reza Barati, who was killed on Manus Island in February 2014, Mr Burnside questioned why the case has not been brought to trial, given it appears to be straightforward.

During the lecture, Mr Burnside recounted being shunned by the legal profession for being outspoken on refugee issues.

“For members of the Bar, speaking publicly is not the done thing. I was deeply conscious of this as, one by one, professional colleagues and people I had thought were friends turned their backs on me,” he said. “At one very glamorous social occasion the wife of senior colleague sidled up to me and said, somewhat archly, ‘Do you think it appropriate that a member of the Bar should speak publicly about these matters?’ With more wit than preparation I replied ‘Do you think it appropriate to know about these matters and remain silent?’ The conversation ended there.”

Mr Burnside was given a standing ovation by the capacity audience at the end of the talk.

An edited extract of the lecture “The bludgeonings of chance” is published in the Sydney Morning Herald.

You can listen to the full speech here.

The annual Hal Wootten lecture series was established in 2006 in honour of UNSW Law’s founding dean, Emeritus Professor Hal Wootten AC QC.  The lecture is given by a pre-eminent lawyer who reflects on his or her life in the law and on law’s potential as a force for good.