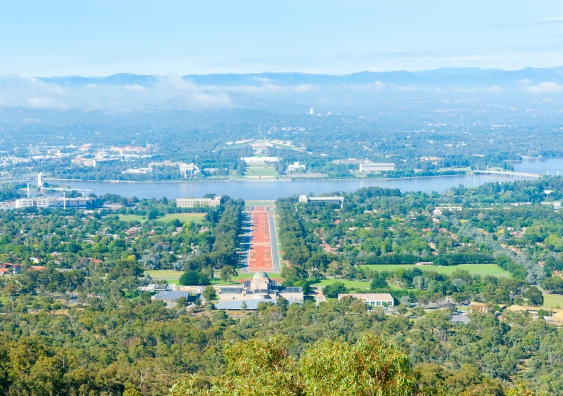 Change is on the way in Canberra. The ACT government, through the Land Development Agency, has been buying up key rural properties for some time. Photo: Shutterstock

OPINION: One of the great joys of living in Canberra is its setting. Most of us are familiar with the blue silhouette of the Brindabellas. But equally important are the ridgelines and wooded slopes of the National Capital Open Space System and, to the west and south-west of the city, the varied scenery of farms and rural properties.

Many would have expected that these rural leases would continue to provide a landscape buffer between the city and the Murrumbidgee. But change is on the way. The ACT government, through the Land Development Agency, has been buying up key rural properties for some time. According to the most recent reports, it has acquired a land bank in this way of some 2500 hectares.

The LDA tells us that these purchases are in line with the 2012 ACT Planning Strategy, which provides for the long-term possibility of development to the west (and east) of the city. The official line is that no decisions have yet been made as to what will happen with this land. However, the nature of the choices that have been made suggests otherwise.

Clearly, the LDA's move is intended to build up the territory's land stocks for future developmental purposes. While leaseholders who have sold may feel pleased, those that remain are understandably troubled. What is the future of the lifestyle they thought they were buying into?

The LDA's head, David Dawes, has said that these purchases are prudent, because "'we just don't know where the city is going to go in the next 30, 40 or 50 years". Surely, though, it is the function of planning in Australia's planned capital to secure the values that underpin our city's future?

Some would argue that it is better for the public sector to own these parcels of land, rather than leaving them in private hands, which might well invite speculation. The ACT government wants to benefit from any uplift in values. But this in turn suggests that the government's obligation to control development in the public interest may be compromised.

The westwards expansion is worrying for a number of reasons. Firstly, it is difficult to reconcile with the government's plan to increase the density of the existing city, rather than facilitating further sprawl. Housing development in these areas will inevitably be car-based and difficult to service by public transport.

While the point has never been made explicitly, these moves also seem to herald the extinction of the town centres idea as the underlying structure for Canberra's planning. Instead of a city with multiple nodes, the medium-term intention seems to be to bring in a more conventional, blob-shaped city, rather than, as the NCDC proposed in the 1980s, extending to the north-west and north-east, towards Yass and Goulburn respectively. By expanding Canberra's girth through higher density residential development, but with no real employment focus, there is a real risk of more congestion and less amenity.

Secondly, there is the matter of the Murrumbidgee River, increasingly encroached upon by housing. The ACT government is proud of its involvement in the Basin Priority Project, which aims to improve water quality, but seems much less aware of the need to protect the integrity of the river's setting. The corridors of the Murrumbidgee and the Molonglo have some protection, but these are narrow strips. The eastern part of the valley of the Molonglo, which was freed up for development by the tragedy of the 2003 fires, is beginning to fill with houses and apartments, with many more to come.

The 2012 ACT planning strategy refers to Canberra continuing to be the "capital in the bush", but then it is the sort of document that promises all kinds of mutually incompatible things. It is what happens on the ground that counts.

The signs are not good. As they have shown with their West Basin plans, the NCA and the Barr government seem to be tone-deaf when it comes to preserving the landscape values of Lake Burley Griffin.

The signs are not good. As they have shown with their West Basin plans, the NCA and the Barr government seem to be tone-deaf when it comes to preserving the landscape values of Lake Burley Griffin. The recently approved development at West Belconnen will occupy a crucial area between the Murrumbidgee River and Ginninderra Creek. River corridors have been allowed for, but housing will occupy the higher ground. Further south, the mooted suburb of Thompson, in Tuggeranong, will impinge on a crucial nature reserve near the Murrumbidgee River. When push comes to shove, there is not much commitment to the integrity of the river system.

If, as many predict, the Liberals win government in October, will they bring in some much-needed clarity and perspective to these matters? So far, they have not told us what they would do about Canberra's planning. It is well-known, though, that Federal Senator Zed Seselja has been promoting housing development west of the river, opposite the Tuggeranong Town Centre, for some time.

What about the Greens? At the federal level, the passing of the old guard seems to have produced a different kind of party, one that is less interested in environmental conservation than in social issues. The Greens' strongest environmental issues relate to climate change, renewable energy and public transport, rather than to conservation. The ACT Greens have maintained a similar stance.

Their support for light rail has been crucial, despite the fact that it will destroy the trees of Northbourne Avenue and the amenity of the surrounding suburbs. While they have a broad ecological sustainability policy, we hear very little from the Greens about the future of the bush capital.

The recent changes to the National Capital Plan have given the ACT government more power over ACT planning than in the past. But this means more responsibility, too. Now that the ACT government is in sole control of the key areas, it is surely time for some consolidated thinking about the urban fringes of the city, and the city's landscape setting as a whole.

As population pressures increase, this is an issue that is becoming more crucial than ever. Yet there seems to be little political will to do more than play the development game.

The financial imperatives that drive so much of the territory's land dealings need careful evaluation. Public land ownership should, ideally, facilitate the implementation of planning. But in the ACT the development-related thinking seems to come first, the planning second.

Professor Jenny Stewart is a visiting fellow in the School of Business, University of NSW Canberra.

This article was first published in The Canberra Times.