In its appointment of new president Grant King, the Business Council of Australia looks set to double down on its failed strategy instead of genuinely doing things differently, writes Lindy Edwards. 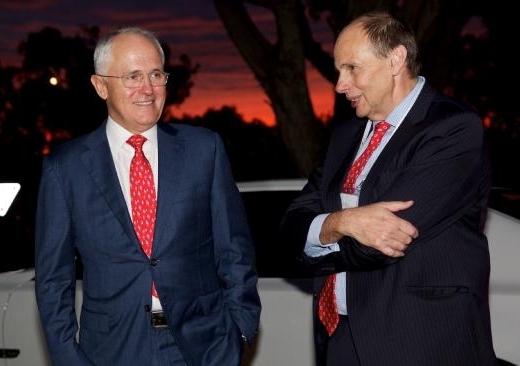 The new head of the Business Council of Australia, Grant King, needs to change his tune to remain relevant. Photo: Richard Wainwright/AAP

OPINION: The Business Council of Australia (BCA) looks set to double down on its failed strategy in its appointment of new president Grant King.

The chief business lobby group found itself at odds with the Coalition government in the last term, as it relentlessly pushed the government to pursue politically unsaleable agendas. It had a significant hand in the Coalition’s disastrous first budget that was widely seen as benefiting the rich at the cost of the poor.

Speaking at Mr King’s appointment dinner, the prime minister again took the opportunity to impress upon the Council the need to face up to the “uneven” benefits of growth and the importance of any reforms being perceived to be fair.

“To overcome the rising disquiet, we must ensure that the benefits of open markets deliver for the many and not just a few,” Mr Turnbull said. “If the results of the recent US presidential election have taught us anything, it is that policy changes must be fair in a very broad sense.”

Nonetheless, King, the former CEO of Origin Energy, looks set to follow the lead of his predecessor in rejecting such sentiments as “anti-business populism”.

“In this age of political populism my concern is we are putting the end before the means. Delivering the care without the prosperity to maintain it,” said Mr King.

His first outings have all reinforced familiar Business Council themes. The need to cut government spending to restore the budget combined with ongoing support for business tax cuts.

His stated priorities are also familiar:

“My focus will be on continuing to drive a more innovative and competitive economy, improving incentives for businesses to invest, and making the economy more flexible so it can respond to global forces of change.”

Mr King has taken the BCA role after criticism of the council for a lack of impact during the federal election campaign. However, the BCA’s response to the growing political headwinds seems to be that it needs to advocate for old positions more effectively, rather than shift its strategy. 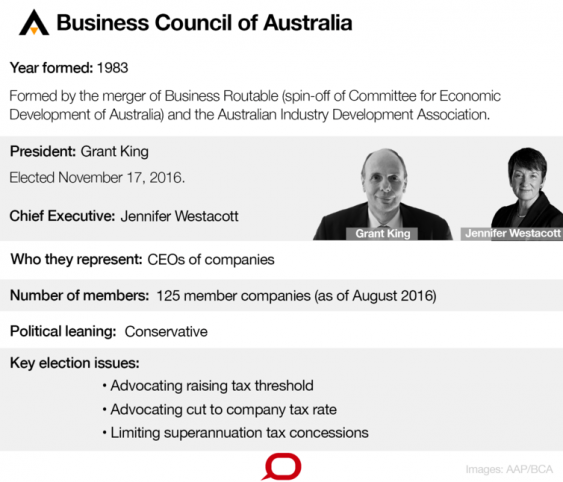 There are aspects of Mr King’s communication strategy that may raise some eyebrows.

“I often use the quote that the public prefers a simple lie to a complex truth,” Mr King says. “I think our challenge is to make the complex simple. The best businesses do that, the best leaders do that. They communicate complex truths in simple ways.”

An example of such simple truth telling would appear to be on display in his explanation of the benefits of business tax cuts.

“Business doesn’t want to pay less tax. It just believes that a lower rate of tax through time generates more activity and a bigger tax base. Clearly and unapologetically we should be seeking to move towards those things that are job-creating behaviour,” said Mr King.

There seems to be a lack of recognition that the reason the community isn’t buying the BCA arguments isn’t because they haven’t heard them or don’t understand them. It is scepticism about the crux of the argument itself.

For years now, we have seen the arguments that if big businesses are allowed to pay less tax, reduce their wages bills, and squeeze small business, they will be more profitable. If they are more profitable they will invest more into the economy and create more economic activity and wealth.

The BCA’s difficulty is that this old fashioned trickle down economics argument is difficult to make against a backdrop of growing inequality. When the global political conversation has shifted to focus on executive pay ballooning from 20 to 300 times the average wage, and the income share of the top 1% accelerating away from the rest of the community, it’s not surprising people are sceptical about exactly how much will trickle down.

In the wake of the global financial crisis, people are also sceptical about whether large corporate investing is the most productive use of those funds. People question whether government investment in education and infrastructure may deliver greater economic gains. Similarly, they debate whether giving small businesses more headroom to invest in their businesses will ultimately deliver greater benefits than focusing on the large corporates.

If the BCA continues on its current course, it’s likely to accentuate the post-Trump community backlash rather than defeat it. In aggressively pursuing a narrowly self-interested agenda for the big corporates it risks making itself the target of negative community sentiment, and deepening political tensions.

This is a moment when business needs to look to its “enlightened self interest”. It needs to realise its long-term interests lie in rebuilding public trust that our politicians and business people are acting in the collective interests of the community.

It also needs to realise that the biggest threat to business conditions coming down the line is the rise of the far right. The true interests of business leaders lie in heading that off. To achieve that they cannot be seen to just be mouthing the words, or telling “simple lies”, they must be seen to be genuinely doing things differently.

Lindy Edwards is a Senior Lecturer in Politics at UNSW.

Why the voice of Big Business is facing its biggest test