Australians have been working towards meaningful change for almost a decade. That cannot be derailed by reverting to symbolic recognition. 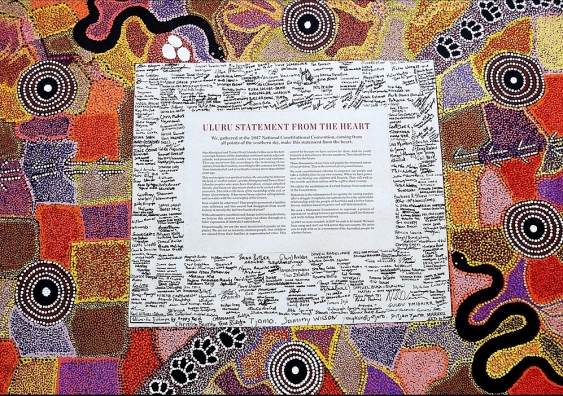 Uluru Statement from the Heart, May 2017, Aboriginal Convention, Central Australia. Image from Wikimedia, BrownHoneyAnt under CC 4.0.

In his Closing the Gap speech to parliament last week, the prime minister injected some order and transparency back into the constitutional recognition process.

The PM anchored his government’s work on the co-design of a Voice to Government back to the 2018 parliamentary inquiry led by Senators Pat Dodson and Julian Leeser. By doing this, he recognised the trajectory of hard work undertaken by politicians and the public for nearly a decade.

The Joint Select Committee on Constitutional Recognition Relating to Aboriginal and Torres Strait Islander Peoples reviewed the Referendum Council’s report and Uluru Statement from the Heart. It produced the most recent report in a long list of public processes on Indigenous constitutional recognition.

In the past nine years, there have been five formal, taxpayer-funded, government-endorsed processes, a legislated framework, the Aboriginal and Torres Strait Islander Peoples Recognition Act 2013 (the Act of Recognition) and eight reports.

The game-changer, Leeser and Dodson acknowledge, was the Referendum Council’s work.

The Dodson-Leeser report found that a Voice to Parliament (as opposed to government) was the only viable reform proposal following the Referendum Council’s deliberative process of 2016 and 2017. It recommended that:

following a process of co-design, the Australian government consider, in a deliberate and timely manner, legislative, executive and constitutional options to establish the Voice.

Symbolism is not enough

This is why so many people were utterly confounded when Ken Wyatt, the minister for Indigenous Australians, unilaterally decided there would be a referendum on Indigenous recognition with a symbolic proposal – likely a statement of recognition – that no one was advocating for.

This proposal was recently rejected by the constitutional dialogues and in the 2017 Uluru Statement from the Heart. It was also rejected before that in the 2015 Kirribilli Statement.

Then, last month, the minister announced a firm deadline for a referendum on symbolism to be held in mid-2021. Confusion reigned.

The consistent rejection of symbolic recognition proposals is poorly understood. One of the challenges of this work has been the very word “recognition”, as adopted by the then prime minister, Julia Gillard, in 2010.

“Recognition” is a term commonly used in constitutional law and political science, and it has a technical meaning in the context of power relations.

Recognition can come in a weak form, such as symbolism. (It’s weak because it does not change the status quo.) Or it can be a strong form, such as designated parliamentary seats, a voice or even an autonomous region.

However important symbols are to Aboriginal people, nine years of this work shows, incontrovertibly, that Aboriginal and Torres Strait Islander peoples do not seek more symbols. And certainly not in the constitution, which distributes power across the federation. They seek change that can make a concrete difference to their lives. 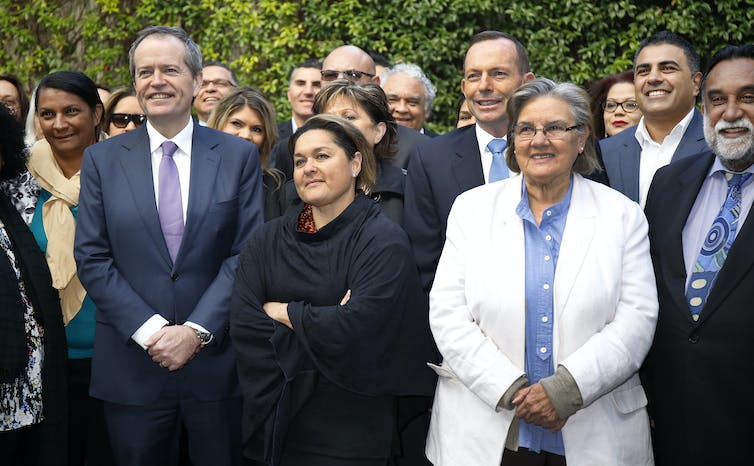 The only viable option for constitutional reform

Leaders from across Australia gathered to speak with the then prime minister, Tony Abbott, and the then opposition leader, Bill Shorten, at Kirribilli House to talk about the direction recognition was headed, with fears there were plans for more symbolism.

The 40 Indigenous leaders present adopted the Kirribilli Statement. It read:

[…] [A]ny reform must involve substantive changes to the Australian Constitution. It must lay the foundation for the fair treatment of Aboriginal and Torres Strait Islander peoples into the future.

A minimalist approach that provides recognition in the Constitution’s preamble, removes section 25 and moderates the race power section 51(xxvi) does not go far enough, and would not be acceptable to Aboriginal and Torres Strait Islander peoples.

During the Kirribilli meeting, we requested a new and ongoing dialogue between Aboriginal and Torres Strait Islander peoples and the government to negotiate the proposal to be put to referendum. They listened. The Referendum Council was set up.

The constitutional dialogues confirmed there was no appetite for symbolic gestures. After the final constitutional convention at Uluru, the Referendum Council recommended a referendum be held to provide in the constitution for a representative body that gives Aboriginal and Torres Strait Islander peoples a Voice to Parliament.

Dodson and Leeser’s report found the Voice was the only viable option for constitutional reform. The report recommended a co-design before deciding on the legal form.

It’s a critical point not readily understood that the Voice, which is a simple enabling provision in the constitution, is regarded as both substantive and symbolic recognition.

Almost a decade of work has gone into this issue, including extensive consultation with Indigenous peoples and the wider Australian public, education programs and the design of constitutional proposals and referendum ballot papers. Australians from all walks of life, including politicians from across the political spectrum, have contributed to this body of work.

After Dodson and Leeser recommended co-design and then consideration of the legal form to follow in December 2018, the 2019 federal budget contained funding for this and a referendum. Leading into the 2019 election, the ALP committed to holding a referendum on the Voice to Parliament.

Wyatt confused many because of his inconsistent public pronouncements. Unusually for an Indigenous affairs minister, he did not reply to a letter from key Aboriginal and Torres Strait Islander leaders from land councils, native title bodies and peak organisations seeking a meeting to clarify his thinking until he was prompted by the media many months later.

This year began with the minister stating once again that a constitutional Voice, a Makarrata Commission and truth-telling were off the table, disavowing entirely the past nine years of work and the Uluru Statement.

This is the complete opposite of the sentiment of the Uluru dialogues, which stated that no existing organisation or entity represents their Voice.

Wyatt’s decision to set a firm deadline of mid-2021 for a referendum on a proposal no one wants was bewildering.

His own party room said they had not been consulted on this. Setting hard timelines for negotiations creates unnecessary pressure for any government. It is notable a spokesperson for the minister quietly retracted that firm deadline the next day.

The one reform Australia has never tried

This week signifies a restoration of order to constitutional recognition. The prime minister and opposition leader both presented important speeches on Closing the Gap. Labor is consistently supportive of a constitutionally enshrined Voice.

Scott Morrison reverted to the two-pronged approach, which is co-design and then decide the legal form. Many mob chipped the prime minister this week for deploying the language of listening and empowerment when Commonwealth policies and initiatives, such as the Indigenous Advancement Strategy and Closing the Gap, demonstrate governments and bureaucrats do not listen to our voice and cannot deliver change. Even so, his important intervention was welcomed.

In the absence of a constitutionally entrenched Voice, there is no obligation on the state to listen. I have consistently argued as a constitutional lawyer, as others have, that structural reform is what is required for transformative change.

This is the one reform Australia has never tried. This is why the Uluru Statement invites all Australians to walk with us now for the structural change that many have been working hard on for almost a decade.