If a High Court challenge to Australia's new rules for electing senators succeeds, it will have the impact of a sledgehammer on the 2016 election, writes George Williams. 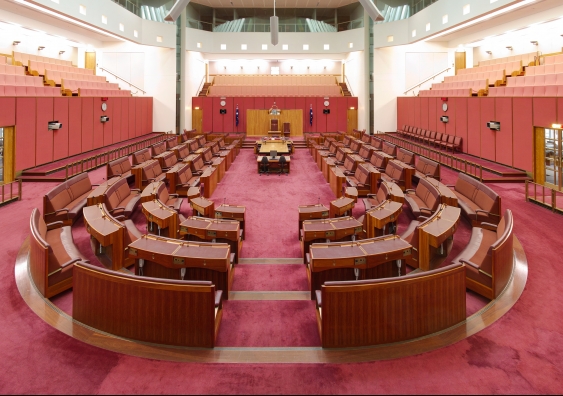 OPINION: The High Court will hear a challenge on Monday and Tuesday to Australia's new rules for electing senators. If the case succeeds, it will have the impact of a sledgehammer on the 2016 election. Planning for a July 2 poll would need to be set aside, and the government forced to think again about Senate voting.

Under the prior system of electing senators, voters marking their ballot paper above the line were only allowed to indicate their support for one party. That party then controlled how the voter's preferences were distributed. Backroom deals meant that a person could end up electing someone they had never dreamed of supporting.

The new system changes this by asking voters to indicate a preference for at least six parties. Preferences are then allocated accordingly, producing a vote that reflects the genuine choices of the voter.

Preparations for the 2016 election would be thrown into disarray, especially if the result also leads to the downfall of the prior voting process.

The new system is being challenged by Family First senator Bob Day on four main grounds. He is contending, first, that differences between above and below the line voting breach a constitutional requirement that there be a single method of electing senators. Second, being able to vote for parties above the line, rather than for individual candidates, runs counter to the constitutional mandate that senators be "directly chosen by the people".

Third, the optional preferential voting models used for above and below the line voting are unconstitutional because they allow the preferences of electors to run out before they elect a candidate. It is argued that this exhaustion of a person's vote undermines the principle that senators be chosen by means of proportionate representation.

Finally, Day is arguing that the new method will mislead and deceive electors, and so prevent a free and informed vote. He says the system is unconstitutional because the ballot paper does not tell people that their vote will be counted even if they fail to number the minimum amount of boxes. In fact, a vote will be valid if a person numbers just one party above the line or six candidates below the line.

Day has an arguable case, especially in respect of his second argument that the new system does not provide for the direct election of senators. In light of this, and the importance of the issue, it comes as no surprise that the High Court has brought the matter on for an urgent hearing.

An arguable case though does not amount to a strong or winning one. In fact, Day's arguments are weak, and have minimal prospects of success. Predicting High Court outcomes can be perilous, but in this instance a victory by Day would be truly remarkable.

Preparations for the 2016 election would be thrown into disarray, especially if the result also leads to the downfall of the prior voting process. On the cusp of Parliament being dissolved, Australia could be left without a workable method of electing the Senate.

These issues of inconvenience and political instability will not, though, prove decisive. It is on the law that Day's arguments will founder. His legal arguments are unpersuasive, and run counter to long-standing doctrine.

Where Parliament has sought to narrow the franchise, such as by denying all prisoners the vote or unduly limiting the opportunities for enrolment, the court has intervened. On the other hand, it has refrained sensibly from second-guessing the details of Australia's electoral process, leaving such judgments to the elected arm of government.

The Senate voting changes clearly fit into the latter category. The new system is one of many forms of voting that could be used. Opinions differ on whether above and below the line voting for the Senate should be retained, and whether optional or full preferential voting should be applied. These, though, are matters of detail and preference, and ought not to be the subject of judicial intervention. Certainly, the constitution provides no firm basis for this to occur.

Chief Justice Sir Harry Gibbs indicated as much in rejecting a challenge to the prior Senate voting system on the eve of the 1984 election. He endorsed the principle that "it is not for this court to intervene so long as what is enacted is consistent with the existence of representative democracy". Chief Justice Murray Gleeson also said more recently that the constitution "leaves substantial room for parliamentary choice, and for change from time to time". Such considerations will almost certainly lead to the defeat of Day's challenge.

This opinion piece was first posted in the Sydney Morning Herald.