Opinion The crossbench ideology that could bring reform unstuck

Of the many lessons the Coalition took from last year’s budget, the most lingering must surely be the importance of winning support from the Senate crossbench, writes Richard Holden. 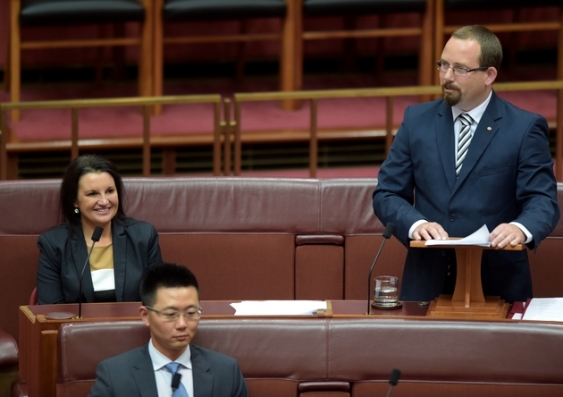 OPINION: Of the many lessons the Coalition took from last year’s budget, the most lingering must surely be the importance of support from the Senate crossbench. With Labor taking a leaf out of the “oppose anything” playbook used by Tony Abbott and US House of Representatives Speaker John Boehner — even things they supported when in government — the Greens or the crossbench remain crucial for getting budget measures passed.

The crossbenchers fall into three basic categories: the Libertarians, the Populists, and the Constituency Voters. Although no categories fit people perfectly, this is a useful sketch.

The Libertarians (David Leyonhjelm and Bob Day fall into this category) want to get the government out of our affairs wherever possible. Leyonhjelm, for instance, refuses to wear a bicycle helmet because of his disdain for regulation.

Jacquie Lambie and, to an extent, Ricky Muir, though they have populist tendencies might better be described as Constituency Voters — identifying with a particular group of voters and putting their interests ahead of all else. Lambie, for instance, held her Senate vote hostage over Australian Defence Force pay rises.

Take the now defunct higher education reforms proposed in last year’s budget as an example. The policy basically allowed for fee deregulation and called on students to pay a greater share of the cost of their education — albeit with the HECS loan scheme still in place.

The Libertarians voted for it: they didn’t like government setting regulated price caps and spending public money to confer private benefits on those enjoying the gift of education. The Populists were dead against the reforms: no $100,000 degree for Glenn Lazarus’s kids and their friends we were told, in no uncertain terms. Constituency Voter Jacqui Lambie worried about the impact on the University of Tasmania. Even when offered a massive compensation package for the university, she wouldn’t budge.

This particular constellation of views makes it hard to find areas where there is overlapping support. Any cuts to entitlements — such as asset tests for the aged pension — tend to be favoured by the Libertarians but disliked by the Populists. Changes to how the states raise and spend revenue, like GST reform, run afoul of the Populists and the Constituency Voters.

Perhaps the only way to get a sizeable block of these ideologically disparate Senators to agree is to propose reforms bold enough to please the Libertarians, but with compensation large enough to assuage the Populists.

GST reform — something that won’t be part of this budget, but is surely on the horizon — is a case in point. A 15% GST with a broader base, coupled with serious income tax cuts might gain support from the Libertarians. To get the Populists on board would require serious compensation for middle and lower-income earners. A large increase in the tax free threshold might do the trick.

The bottom line is, however, that it will be very hard to find overlapping consensus on almost any major issue. That reinforces the power of Labor’s “no, no, no” approach. It also means the Greens, under new leadership, hold a lot of markers and are a likely negotiating partner for the Coalition.

It is also worth remembering that the government is proposing reforms to the electoral rules for the Senate, designed to make it harder for very minor candidates from very minor parties to get elected through preference deals. This may involve the introduction of optional preferential voting (instead of compulsory preferential voting), or a minimum threshold of first preference votes required to be elected. Some version looks likely to pass, and if it does it will mean this Senate term will almost surely be the last for some number of the crossbenchers (for example, Ricky Muir).

A backdrop of mandatory retirement cuts two ways. On the one hand, it might create a desire for some legislative accomplishments to point to. On the other hand, helping out the very government that is changing the rules to run one out of the Senate doesn’t sound so appealing. Donald Rumsfeld would call this factor a “known unknown”, and it makes it especially difficult to predict support for any specific budget measure.

Whatever budget measures are put forward on Tuesday night one thing we know for sure is that negotiating with a crossbench of such disparate and essentially incompatible views will be no easy task.