Professor Megan Davis, the first Aboriginal person from Australia elected to a United Nations (UN) body, reflects on 10 years of service and the persistent fight for Indigenous rights. 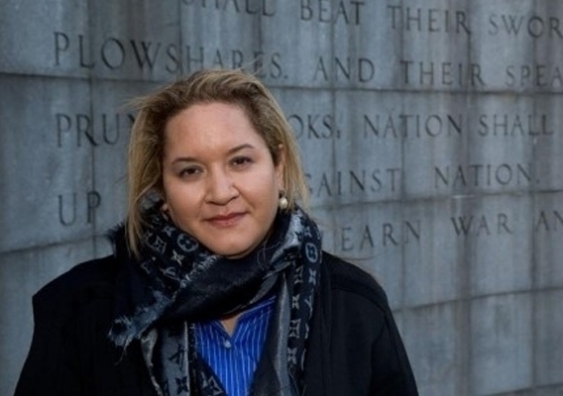 It’s 1999 and a young Megan Davis is boarding a flight to Geneva. She only has $40 in cash and a blue backpack.

Her brother Willy bought it for her from the Beenleigh Army Disposal store.

She is nervous – it’s her first time overseas. She writes notes on her hand to remember the routine outlined during the inflight safety demonstration.

She is set to begin her fellowship at the UN the next day. She takes a deep breath: ‘Here we go’.

Over 20 years later, the now professor laughs. She adjusts her computer screen. We are speaking over Zoom; the video lags. She shakes her head.

“I had no idea what to expect,” Professor Davis says.

“Thinking back to that moment, boarding the plane to Geneva for the first time, I am amazed by my courage.”

She laughs again. An Eagleby kid from a housing commission home flying to Geneva?

“I remember how exciting – as a young near graduating Aboriginal law student – that opportunity was. But I can’t help but laugh about how ill-prepared I was for international travel, even if I had studied French at the University of Queensland.”

A young Prof Davis had secured one of four global fellowships with the United Nations.

Although a competitive process, this was an opportunity she heard about while doing research work with the Foundation for Aboriginal Islander Research Action (FAIRA).

FAIRA, a native title representative body, was a hub of activism and law reform in Brisbane in the ‘90s. Jackie Huggins, a renowned Aboriginal scholar, had urged Prof Davis to work with them.

“At FAIRA, I got to work with Les Malezer on international law,” she says. “I saw Indigenous activists, scholars and writers come and go: the likes of Merv Riley, Bob Weatherall, Sam Watson, Murandoo Yanner and Lionel Fogarty.”

It is where it “all started”.

And although she was not aware of it as she boarded the plane in 1999, the prestigious fellowship would send her towards a path to a decade at the UN.

'Before anything else, I am Cobble Cobble'

It was during this first experience at the UN, as a Fellow situated within the Office of the High Commissioner for Human Rights, that Prof Davis first began to understand the power – as well as the complexities – of international bodies, human rights, and their ability to empower Indigenous peoples across the world.

Prof Davis says in those early years as a Fellow, she would sit and listen during all the workshops, meetings and conferences.

“I knew, at that time, I mostly needed to listen, learn and do the work.

“But also this was a time when cultural protocol mattered and young people listened and watched. It was how we learnt the ropes. And there were many leaders of cultural authority who led advocacy at the UN.” 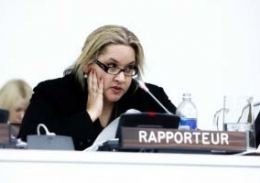 Despite the international focus of the UN, she says, it was and continues to be, her family and community back home that centres her work.

It is all Aboriginal and Torres Strait Islander peoples here, she says, “across all our diverse First Nations”, that motivates her to test the capacity, as well as understand the limits, of international law to bring about “tangible change for mob”.

“I am, before anything else, a Cobble Cobble woman from the Barrungam Nation,” Prof Davis says.

“When I have spent time working overseas, including with Indigenous brothers and sisters from other places, it is my community at home that grounds my work.

“It is why I am still motivated to engage with international law and understand how it can be used by First Nations peoples ourselves.”

There is the opportunity, she says, to examine how these international mechanisms can empower “our communities to operate as our own polities and for us be our own political agents”.

This included working with the UN Secretariat on the inter-sessional working group elaborating the United Nations Declaration on the Rights of Indigenous Peoples.

Protecting the rights of Indigenous peoples

After several years as a UN Fellow, Prof Davis continued to engage with international human rights and Indigenous rights.

The year following her fellowship, she would return to the UN representing the Aboriginal and Torres Strait Islander Commission (ATSIC) Delegation, where Prof Davis was a junior legal counsel. 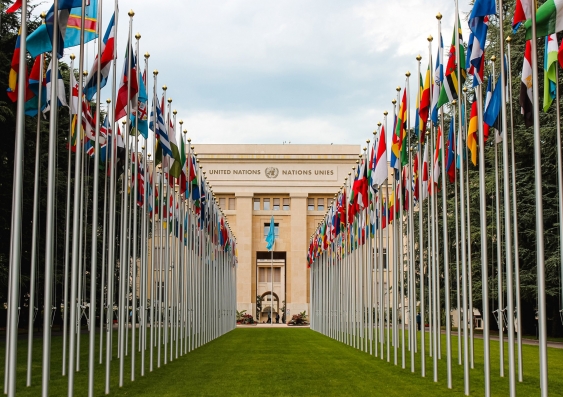 Prof Davis was involved in various capacities throughout the drafting of the UN Declaration on the Rights of Indigenous Peoples. As a fellow, she received a UN certificate in human rights training and a UN Institute of Research and Training (UNITAR) certificate in Diplomacy and Peace-building. Photo: Unsplash

“Having ATSIC put that commitment and belief in me, after my training as a UN Fellow and legal counsel, was career-making,” she says.

“It allowed me to apply my learning and continue to work on the Declaration through the different working groups. As well as learn from international Indigenous scholars and lawyers.”

Prof Davis would continue to be involved in the drafting of the Declaration in various capacities after ATSIC was abolished.

Her involvement continued until its final drafting in 2005, before the official adoption by UN member states in 2007. Australia finally became a signatory in 2009.

“It was incredible to be involved in that process of standard-setting – which is international law-making – at such a young age and participate in the drafting of the Declaration,” Prof Davis says.

“Yet I was also acutely aware that the work on international Indigenous rights had only really just begun.”

The Declaration experience also awakened Prof Davis to the role that the UN conference room, and its conditions, play in achieving successful negotiations. Factors such as temperature, room configuration, and agenda flexibility become vital.

This experience would later influence Prof Davis’ work in designing the constitutional dialogues for the Referendum Council that led to the Uluru Statement from the Heart.

Making history is just the beginning

In 2011, Prof Davis made history as the first Indigenous person from Australia elected to a UN body – the UN Permanent Forum on Indigenous Issues.

The Permanent Forum is a subsidiary body of the UN Economic and Social Council that advises the UN on Indigenous issues related to economic and social development, culture, the environment, education, health, and human rights. 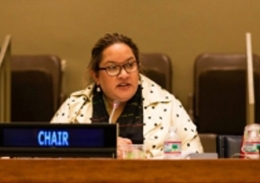 “My years in the Permanent Forum were both challenging and rewarding,” Prof Davis says.

“I was honoured to be the Chair for a period and author of the first UN report into the implementation of the Declaration in terms of combating violence against Indigenous women and girls, and expert meetings for Indigenous Youth.”

Prof Davis was an Expert Member of the Permanent Forum from 2011 to 2016. This tenure included being the rapporteur for meetings overseeing the drafting of the official UN record examining these key issues.

During her term, she was the Forum’s representative to UN Women, UN AIDS and was an expert on Indigenous diplomacy with the UN Institute of Training and Research.

Prof Davis was involved in UN Country missions to the Republic of Congo, the Russian Federation, Nicaragua, Guatemala, Finland, and many other countries.

However, her work at the UN would not end with her time at the Permanent Forum. 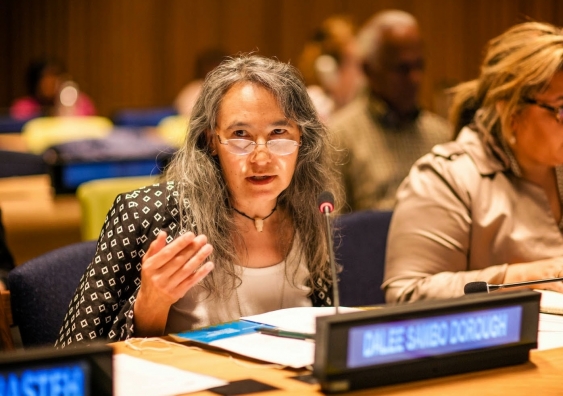 The following year, in 2017, Prof Davis was elected by the UN Human Rights Council to the Expert Mechanism on the Rights of Indigenous Peoples.

“The work of the Expert Mechanism involves providing expert advice to the UN Human Rights Council and to assist member states and Indigenous peoples to achieve the goals of the Declaration,” she says.

“It is a unique mandate that makes the Expert Mechanism effectively the supervisory mechanism for the implementation of the Declaration.

“Our job is to interpret the Declaration and to use our novel mandate to mediate disputes between Indigenous peoples and the state and third parties such as the extractive resources industry.”

After a three-year appointment to the Expert Mechanism, Prof Davis was re-elected for another term in 2019. Earlier this year, she was elected Chair.

“The work of the Expert Mechanism is complex and wide-ranging. The adoption of the Declaration was only the first step; the real work is to ensure its vision is realised,” she says.

Repatriation of a Yaqui mask

Prof Davis considers her work as the lead expert for a mediation between the Yaqui people in Mexico and the Swedish Museum a highlight of her diplomatic career.

“Recently, I worked on the repatriation of a sacred Yaqui mask, the Maaso Kova [ceremonial deer head], with my colleague, American Indian Law Professor Kristen Carpenter from Colorado Law School. 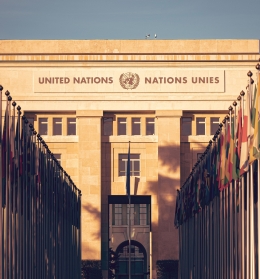 Prof Davis' work at the UN has allowed her to assist Indigenous peoples from around the world. Photo: Unsplash

“The experience of mediating the dispute and negotiating the return of the mask, after decades of Yaqui advocacy, was exhilarating.”

Prof Davis had led the dialogue between the Swedish government and the Yaqui people at the University of British Colombia in Vancouver. A repatriation process was agreed to.

When she landed in Sydney from Vancouver in 2020, the borders closed behind her as COVID-19 engulfed the world.

During the pandemic years, Prof Davis continues her UN work on Zoom, elongating her lengthy workdays.

She has since led mediation between Brazil and Indigenous groups about their failure to protect vulnerable Indigenous Amazonian groups from COVID-19.

Change in the here-and-now

Reflecting on the last 10 years working in UN bodies – a journey that began decades ago with that first flight to Geneva – Prof Davis says she is continually inspired by the work of Indigenous people across the world.

“I am always left in awe by the power of Indigenous peoples working collectively: intellectuals, activists, academics, lawyers, and community leaders on the ground.”

Their brilliance, she says, motivates her to continue to engage on the international stage; “to use what tools we have to better the situation for our communities, to have autonomy and to push for self-determination”.

In that way, her work is never merely “intellectual pursuits and curiosity”, but is also work that impacts her community, her family, and kin. 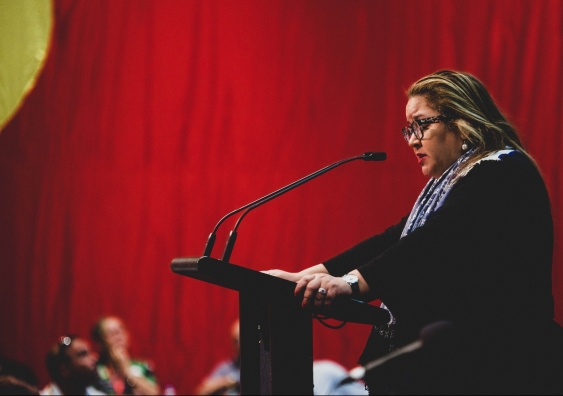 In Australia, Prof Davis continues to be instrumental in pushing for substantive constitutional change for Aboriginal and Torres Strait Islander peoples through the Uluru Statement from the Heart. Photo: UNSW Indigenous Law Centre

“That is the way for most Aboriginal people,” she says.

“My work aims to make a change in here-and-now. It’s not critique for the sake of critique. It’s not theoretical. It’s practical. It seeks to make change now. That’s what I always want to do as an academic, particularly in an international setting.”

Prof Davis pauses. She adjusts her glasses and says she will need to leave our Zoom call soon. It’s getting late. Laughter from her nieces in the next room echo in her mic.

“At the heart of it, my work is informed by how the state has interacted with us as Aboriginal peoples since invasion and dispossession,” Prof Davis says.

“From the so-called Protection-era of racial segregation which my grandfather needed to escape. To his stolen wages and my experience growing up in the Joh-era in Queensland.

“It all matters – my work is not dislocated from the contemporary manifestations of colonial and post-federation discriminatory law.

“Whether I am in Geneva, on Country in south-west Queensland, or visiting Mum in my childhood home in Eagleby, I carry these experiences. I carry with me the power of my bloodlines.

“What greater motivation is there?”

Professor Megan Davis is a Cobble Cobble woman. She the current Chair and Expert Member of the United Nations Expert Mechanism on the Rights of Indigenous Peoples.