Does it matter how we “stop the boats”?

A new Policy Brief compiled by UNSW's Kaldor Centre on responses to ‘boat migration’ has found that boat turnbacks are unsustainable and do not comply with international law regarding search-and-rescue, refugees and human rights. 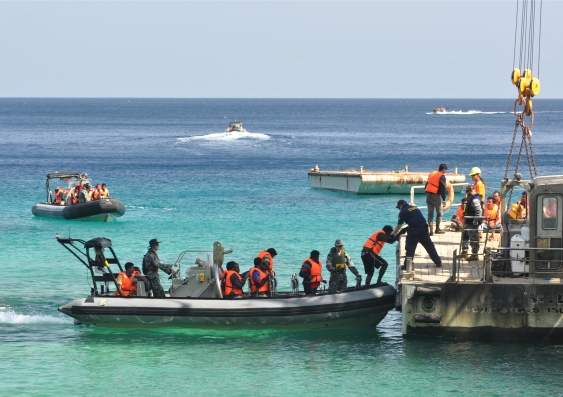 Turning back boats of asylum seekers is neither compliant with international law nor viable as a long-term strategy, according to a new Policy Brief from UNSW’s Kaldor Centre for International Refugee Law.

The interdiction of asylum seekers at sea: Law and (mal)practice in Europe and Australia examines the military-led border security approaches in Australia (Operation Sovereign Borders) and the European Union (Operations Sophia and Triton) against standards set by international law.

A detailed picture of non-compliance emerges: these deterrence operations do not accord with the UN Convention on the Law of the Sea, the Search and Rescue Convention, the Safety of Life at Sea Convention, the Refugee Convention, or the core international human rights treaties.

The resulting EU and Australian policies neglect human rights and jeopardise the principle of non-refoulement, which prohibits States from sending people to any country where they face a risk of persecution, ill-treatment or other serious harm.

Policy Brief author Dr Violeta Moreno-Lax says: “Deterrence policies do not really ‘save lives’. They hamper desperate people fleeing war and persecution from finding safety. If the political will to save lives really existed, then governments in both hemispheres would replace the current securitised approach with a comprehensive, protection-centred vision.”

The Director of the Kaldor Centre, Scientia Professor Jane McAdam, says: “This Policy Brief highlights why a principled, legal approach to protection is needed if lives are to be saved and refugees are to find safety and security. Deterrence simply shifts the problem out of (our) sight; it doesn’t address the underlying protection needs.”

The new Kaldor Centre Policy Brief outlines what Europe and Australia must do to comply with international law, including the need to:

About the author: Dr Violeta Moreno-Lax is Lecturer in Law, founding Director of the Immigration Law programme, and inaugural Co-Director (2014-16) and Co-Founder of the Centre for European and International Legal Affairs at Queen Mary University of London. She is also a Fellow of the Centre for European Law of King’s College London, EU Asylum Law Coordinator at the Refugee Law Initiative of the University of London, Co-Chair of The Refugee Law Observatory, Convener of the Society of Legal Scholars Migration Law Section, and a member of the Steering Committee of the Migration Law Network. Since January 2016, she has been on the Editorial Board of the European Journal of Migration and Law. She has published widely on international and European refugee and migration law, and regularly acts as an expert consultant for EU institutions and organisations in the field.

Read the full Policy Brief, The interdiction of asylum seekers at sea: Law and (mal)practice in Europe and Australia

Read the Expert Roundtable Report, Where to from here, which discusses protection at sea.

Listen to the podcast All At Sea, with an expert panel discussing the law, policy and practice of turning back boats in Europe, the United States and Australia.

The Andrew & Renata Kaldor Centre for International Refugee Law at UNSW is the world’s first and only research centre dedicated to the study of international refugee law. The Centre was founded in October 2013 to undertake rigorous research and contribute to public policy involving the most pressing displacement issues in Australia, the Asia-Pacific region and the world.