Opinion FactCheck Q&A: who is responsible for going to war in the Westminster system?

When Attorney-General George Brandis was asked on Q&A about a parliamentary vote on the decision to go to war, he said that was not part of the Westminster tradition. Is that right? 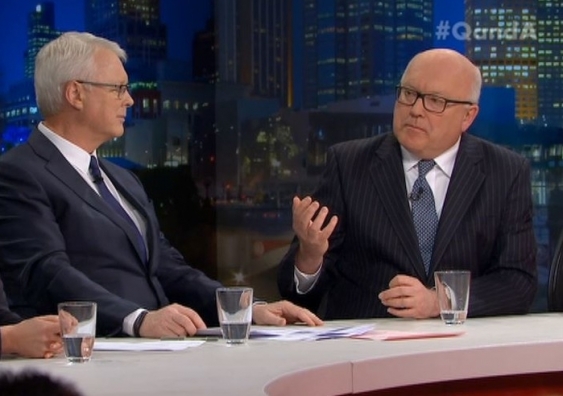 TONY JONES: …let’s concentrate on the question, which is actually about whether there should be a vote in parliament. Indeed, I imagine a joint sitting, since the Senate will probably be involved in this, in order to take us to war in the future.

GEORGE BRANDIS: That is not something that our system has ever acknowledged, it hasn’t been part of the Westminster tradition and it’s not something that I would favour… the executive government in the Westminster system, the executive government has always been that organ of our Constitution that takes the ultimate responsibility for decisions to go to war. – Attorney-General George Brandis, speaking on Q&A, July 11, 2016.

The release of the Chilcot review into the UK’s involvement in the 2003 US-led war in Iraq has led to fresh scrutiny of how Australian politicians handled the decision to join the drawn-out conflict.

When Q&A host Tony Jones asked Attorney-General George Brandis about whether there should be a vote in parliament on such a decision, Brandis said that was not part of the Westminster tradition. He said the executive government has always been the organ of the Constitution that takes the ultimate responsibility for decisions to go to war.

When asked for sources to support his statement, George Brandis' spokesman declined to give an on-the-record comment.

However, we can can look to the Australian Constitution – and to the United Kingdom, the original home of the Westminster system of government – to see how true his statement is.

Who has the power to take Australia to war?

In Australia, the power to declare war or authorise the use of military force in a foreign country is part of the prerogative power vested in the executive government by section 61 of the Constitution.

Section 61 itself is pretty bare. It simply vests “the executive power of the Commonwealth” in the Queen, exercisable by the governor-general. By convention, the governor-general exercises almost all of his or her powers on the advice of the prime minister and cabinet.

It is accepted that the “power” referred to in section 61 extends to the prerogatives of the Crown, which includes the power to declare war and authorise the use of military force. Section 68 of the Constitution also vests the command of the military forces in the governor-general (again, exercisable on the advice of the prime minister and cabinet).

What is the ‘Westminster tradition’ on parliamentary scrutiny of war powers?

Under the Westminster tradition that Australia inherited from the UK, prerogative powers are left to “the executive”, which includes the Queen (represented by the governor-general), prime minister and ministers. In practical rather than purely legal terms, the executive powers are exercised by the Australian prime minister and the senior ministers of the government. They do not require the prior parliamentary authorisation of parliament to take Australia to war.

Thus, Prime Minister John Howard did not seek parliamentary approval before committing Australia’s military to the US mission in Afghanistan (although that deployment was supported by the Labor party).

No parliamentary approval was sought in 2003 when Australia committed its military to the US-led invasion of Iraq. Labor opposed that action in the absence of a further United Nations Security Council resolution authorising the use of force.

Some minor parties have argued that the parliament should have a greater role in debating and authorising the executive’s war powers, but this has not materialised. The status quo is currently supported by both major parties.

Any change to this could arise simply through practice – the executive could start seeking a parliamentary vote on its decision to authorise military force – and this, over time, might develop into a constitutional convention. It might also be achieved more immediately by carefully drafted legislation.

So Brandis is correct that “the executive government has always been that organ of our Constitution that takes the ultimate responsibility for decisions to go to war”.

However, while there is no constitutional requirement for the Australian parliament to authorise the use of force, this is not to say the parliament has no role in scrutinising the authorisation of military force by the executive government.

How does the UK go to war?

The Westminster system began in the UK. There, some traditions have changed. The UK government has relatively recently developed a practice of seeking the authorisation of the House of Commons before deploying military force. This occurred, for example, before the UK joined the US-led invasion of Iraq in 2003.

In 2011, the UK government acknowledged that this practice had developed into a convention. Here is how the Cabinet Manual describes this relatively new convention:

[B]efore troops were committed the House of Commons should have an opportunity to debate the matter and [the government] said that it proposed to observe that convention except when there was an emergency and such action would not be appropriate.

Importantly, the convention in the UK requires a parliamentary debate on the question – but the final decision on the deployment of troops still rests with the executive. In April 2016, David Cameron’s government abandoned a plan to introduce a war powers act, which would have made it a legal requirement to seek parliamentary approval before deploying British troops in combat.

Despite the requirement of seeking parliamentary approval resting only on convention, the UK government has been reluctant to act against parliament in recent years. In 2013, when the House of Commons refused to authorise further use of military force in Syria, the Prime Minister declined to act contrary to Parliament’s wishes.

The recently released Chilcot Inquiry report into the UK government’s decision to send military force into Iraq has revealed that even in a country where Parliament authorises use of force, this does not guarantee well-informed decisions are made.

The Chilcot report highlights the importance of transparency and scrutiny of the executive processes and advice that informs those decisions.

Brandis is correct that in the Westminster tradition, “the executive government has always been that organ of our Constitution that takes the ultimate responsibility for decisions to go to war”.

However, as the changes to the UK practice demonstrate, this tradition is not set in stone.

This FactCheck is fair and its conclusion is accurate. Two points should be emphasised, however.

One is that Brandis' claim is that the executive government takes ultimate responsibility for such decisions. This statement does not preclude parliamentary debate or, even, a vote of some kind.

The second is that the “Westminster system” is not monolithic and, in any event, is in a state of flux, particularly as far as prerogative power is concerned. The author has drawn attention to the extent to which the scope and manner of exercise of the prerogative is changing, quite rapidly, in the United Kingdom.

In Australia, the Westminster tradition necessarily is overlaid by the written Constitution including section 61 of the Constitution (from which all Commonwealth executive power derives). – Cheryl Saunders