Data on where food banks are used and who uses them provide the opportunity to better target services to those in need, write Richard Vidgen and Giles Hindle. 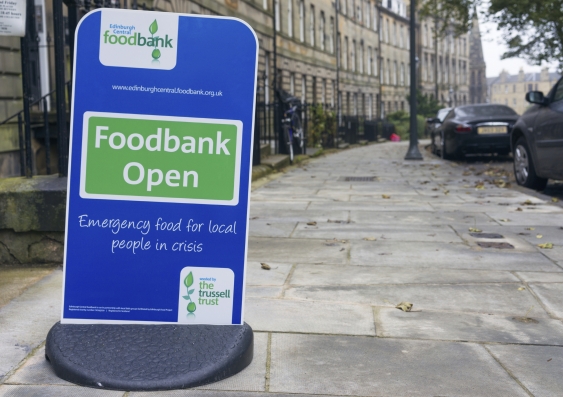 OPINION: The story of Jesus feeding 5,000 people with just five loaves of bread and two fish takes some believing, especially when read by a modern audience that is used to a society of waste and want.

But while “waste not, want not” may well be the choice phrase for millions of parents at mealtimes, food banks across the UK are performing their own small miracles every day in making sure there is enough food to go round.

UK food bank use is still at record levels. Over a million food packages – with three day’s worth of food – were given to people in crisis by the Trussell Trust in the last year alone.

The figures from the charity, which operates a network of more than 420 food banks, underline the scale of the challenge for those tackling poverty and points to a problem with hunger that’s not going away.

For the first time, academics from the University of Hull, working with data scientists from Coppelia and consultants from AAM Associates, developed a prototype tool to map food bank data against geographical demand. As well as showing actual food bank usage the prototype uses 2011 Census data to predict possible areas of food bank need.

Researchers took various census variables, for example levels of deprivation and unemployment at a ward level and found that many of these were highly correlated with food bank usage per head of population. Food bank use was shown to be higher in wards where there are more people who are unable to work due to long term sickness or disability.

Higher food bank use was also shown to be associated with deprived wards or areas with higher levels of people in skilled manual work.

Looking at anonymous postcode data for people referred to Trussell Trust food banks against census data has also enabled the trust to drill down to a micro-level and look at trends specific to a local area, as well as looking at the national picture.

Taking London as an example, the mapping shows high levels of food bank referrals due to benefit delays in certain wards in north and south-east London.

While the data alone can paint a vivid picture of food bank use in these areas, it requires more investigation to really get to the heart of the issue, and to find out if crisis provision is failing in these places, or if it is simply the case that local authorities are working more closely with food banks.

While finding out where food banks are used and by who is all interesting stuff, beyond the nitty-gritty of data metrics, there is now the opportunity for this tool to be used on a wider scale and really help to make a difference to people’s lives.

Adding in the referral agencies that provide access to food banks will help to provide another dimension for analysis. The Trussell Trust runs the majority of food banks, but future initiatives to incorporate data from non-trust food banks will also allow us to provide full coverage of UK emergency food provision for the first time.

And in time we will also add more open and external data: for example, to see if and how weather data impacts on food bank use.

On top of this, sharing data with other charities involved in poverty alleviation – for example homelessness charities – will provide a richer picture of food poverty and deprivation across the country.

With a joined up approach to data, and insights from other charities and food aid providers, this data could be used by local projects to work out where to target their efforts and which additional services would best help tackle the biggest local issues. And it is hoped this will lead to better informed interventions and greater influence on policy.

Data is a big opportunity for charities and third sector organisations and one that may have an impact that we are only beginning to understand. We hope this early analytics tool will provide a basis for food banks and other front line agencies to create powerful real world data applications.