What will the NSW Premier be prepared to give away to secure the Upper House support of the Reverend Fred Nile, asks George Williams. 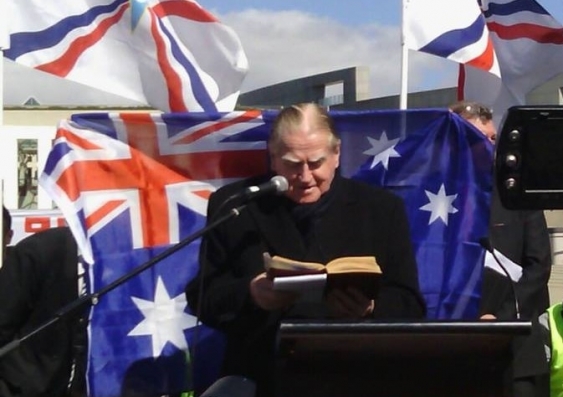 OPINION: Mike Baird's first order of business after the state election is to implement his signature policy of partially privatising the state's electricity network. Standing in his way is the upper house of the NSW Parliament, which must pass the bills providing for the 99-year lease.

The likelihood of conflict has given rise to the normal push and shove around the idea of mandates. The Premier asserts that he won a mandate from the people to pursue his policy. Those opposing him say that they campaigned against the idea, and so have a mandate to block it. Both sides are correct, showing how little use the idea is in practice.

The problem for the Premier is not one of mandates, but of numbers. The Coalition will lack a majority in the upper house, and so will be forced to rely on the votes of crossbenchers. The most likely outcome is that the decisive hand will be held by the Christian Democratic Party, lead by the Reverend Fred Nile.

Nile is clearly enjoying this prospect, and has sought to stamp his influence on the debate. He has proposed an inquiry into the lease and supported a public float of the assets. No doubt aware that he may never get a better chance to secure support for some of his cherished ideas, he has also reminded people of his desire to see extra government support for scripture classes in schools, legal recognition of the unborn child and the drinking age raised to 21 years.

Former premier Barry O'Farrell paid a significant political price for caving into the Shooters and Fishers Party by agreeing to hunting in national parks. It will be fascinating to see just how much Baird is prepared to give away to secure Nile's support, and how effective Nile is in securing such concessions.

It is possible that a deal will not be done to the satisfaction of both parties, or that the election results mean that Nile does not hold the balance of power on this issue. The problem for Baird is that he cannot afford a stalemate, as too much of his government's agenda depends on the policy.

As he has said, he has no Plan B, and so it is unthinkable that he could govern for the next four years without implementing this promise.

The NSW Constitution sets down special procedures for resolving a deadlock produced by the failure of the upper house to approve a bill passed by the lower house. In the case of budget bills, the Governor can simply sign them into law without the consent of the upper house.

Other bills like that for the leasing of poles and wires are subject to a different provision. It says that if a proposal is rejected twice by the upper house, with an interval of three months in between, a joint sitting of both houses can be convened to discuss the proposal. If this does not lead to a change of mind, the government can call a referendum, thereby bypassing the upper house and giving voters the final say.

This process has been invoked before. For many decades, the NSW Labor Party sought to abolish the upper house, as was achieved in Queensland in 1921. Not surprisingly, the main obstacle was that upper house members were not prepared to vote themselves out of a job.

In 1961, Labor premier Bob Heffron used the special law-making procedure in the state constitution to put the issue to a referendum. The people rejected the plan to turn the NSW Parliament into a single chamber, with only 42 per cent of voters in favour.

Baird's proposal would likely face the same fate. The evidence suggests that he won the state election despite the unpopularity of his privatisation policy. If this is true, it is hard to see that the community would support the policy at the ballot box.

All this points to the upper house playing the crucial role. Here, a spanner may be thrown into the works as there is a possibility that the election for the upper house will be overturned.

An error with the NSW electoral commission's iVote system meant that around 19,000 votes were cast using a ballot paper that failed to include two parties in the above the line section. One of those parties, the Animal Justice Party, is vying for the last spot in the upper house. If it misses out, it has foreshadowed a court challenge.

If it or another party can show that the mistake may have affected the result of the election, the court may order a fresh poll for the upper house. This occurred after the last federal election, when missing ballot papers lead to a new election for the West Australian Senate. Such an outcome in NSW would no doubt be dramatic and expensive, and would produce even further delay and uncertainty for the Premier and his privatisation plan.