Agreement on the controversial Trans-Pacific Partnership could come as early as this week, writes Tim Harcourt. 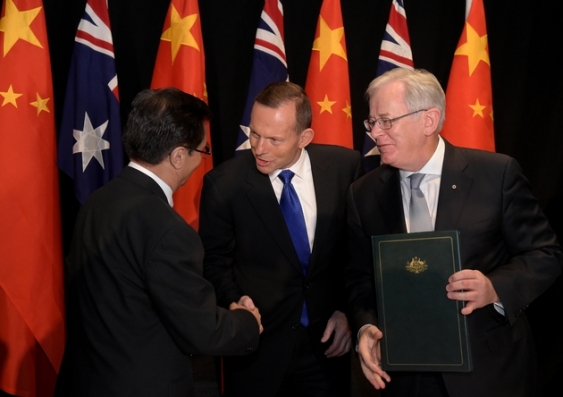 Signing the China FTA was just the start. Lukas Coch/AAP

OPINION: Agreement on the controversial Trans-Pacific Partnership could come as early as this week, with negotiations now focused on “the last few issues,” according to Trade Minister Andrew Robb.

Movement towards finalising the TPP comes as unions step up a campaign supported by Opposition Leader Bill Shorten against what is seen as anti-labour provisions in the China-Australia Free Trade Agreement, taking political debate over free trade to a new level.

“Dry” economists on the right don’t like “trade distorting” bilateral agreements (they don’t even like calling them “free trade” agreements), while many on the left are concerned about trade agreements going too far, beyond reducing tariffs and quotas, and getting involved in social policy, labour standards and the provision of public goods.

But even beyond the political debate, there is the question of what Australian businesses want from public policy as they engage themselves in global markets.

The DHL Export Barometer gives us a pretty good handle on what exporters think. It surveys 600 Australian exporters annually, and has done since 2003.

For the most part, trade agreements have traditionally played a small part in impediments to exporting. Most businesses worry about the exchange rate – when it is too high their goods and services become expensive, when it’s too low their input costs soar (as 80% of exporters also import). They also worry about border regulations and business culture differences. For the most part they didn’t think about FTAs and certainly not the GATT or the WTO.

But in the DHL Export Barometer for 2015, there’s good news about free trade agreements, which will be music to the ears of Andrew Robb.

In surveying existing and new agreements there is evidence that exporters like Australia’s FTAs and that they actually work in a practical business sense despite the recent controversy.

According to the DHL Export Barometer, the USA FTA (AUSFTA) is at last helpful after a decade of implementation. Other agreements deemed helpful include those with New Zealand, Singapore and ASEAN. The survey finds AUSFTA is benefiting exporters, with increased sales and a larger proportion of exporters claiming the agreement has had a positive impact on their business (55%).

This occurred despite the USA hitting the sub-prime crisis just three years after the deal was forged in 2005. The US unemployment rate has now returned to pre-GFC levels, notwithstanding the commentators who predicted that the AUSFTA would “kill a country” (I assume they meant Australia).

The support for AUSFTA was followed by that for New Zealand (47%), AANZFTA – the agreement between Australia, New Zealand and ASEAN on 41% and Singapore on 38%.

The new “trifecta” of FTAs – Japan, South Korea and China – has got the endorsement of the Australian exporter community. In fact, Japan is more beneficial than expected and all FTAs to North East Asia are enticing new exporters. Some 61% of exporters think the China FTA will have a positive effect, 36% think South Korea will and 35% think Japan will deliver.

In terms of the Japan FTA, 59% thought the trade pact would increase exports to that destination, and 38% thought they would start exporting to Japan as a result of the FTA. Many also thought the FTA would help enhance an online presence and help develop new products and services for that destination.

In terms of future FTA destinations, exporters think that India, Indonesia, the Gulf Co-operation Council and Latin America should now be on Andrew Robb’s dance card. But of all the future pacts, India drew the most negative ratings, consistent with the view about increased competition from India.

But the TPP has some complications not always apparent in up and down trade deals, including the investor provisions that have been controversial in other jurisdictions. As Princeton economist Dani Rodrik pointed out in his book “Has Globalisation Gone too Far?”, when trade agreements stray onto the turf of the provision of public goods, or legislation like plain packaging for tobacco, they are likely to lose public support.

Even in the China FTA the labour market provisions have overshadowed the benefits the overall agreement would bring. And it is important to remember Rodrik’s finding that economies that are open to trade have well developed labour market institutions and social insurance.

This is reflected in my own research that showed that exporters, on average, paid 60% higher wages than non-exporters, provided better levels of occupational health and safety, more education and training, equal opportunity provisions and were more likely to be unionised.

The research has shown free trade can grow side by side with union support. An open economy is bolstered by improvements in productivity, efficiency and fairness in the labour market. These are important lessons to heed as we strive to benefit from the next round of FTAs.