Opinion Hawke was our larrikin, but also our reformer

Bob Hawke led a set of economic reforms that modernised the Australian economy and set the stage for the prosperity of the last three decades. 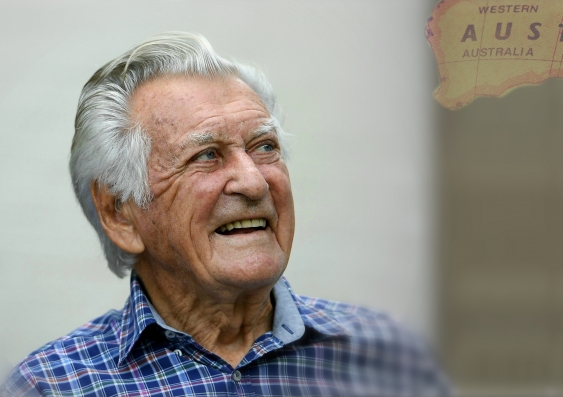 Bob Hawke will be remembered variously as Labor’s longest and Australia’s third-longest serving prime minister, as a union leader, and a larrikin.

But most of all, he will be remembered as a reformer -— presiding over a set of economic reforms that modernised the Australian economy and set the stage for the prosperity of the last three decades.

On Sunday March 6 1983, hours after the election that swept him to victory, Hawke and his treasurer-designate Paul Keating met the head of the treasury John Stone, a contemporary of Hawke’s from Perth Modern high school, in the empty saloon bar of Canberra’s Lakeside Hotel, where Hawke had spent the night.

Stone told him the dollar was far too high and recommended a huge and immediate devaluation of 10%. Hawke's new economic advisor Ross Garnaut soon formed the view that it was crazy to manually adjust the dollar to stop too much money pouring into and out of the country. When, later in the year, Stone opposed the idea of floating the dollar and the Reserve Bank recommended only inching slowly towards a float, Hawke said words to the effect of “why not right now?”.

From Monday December 12, 1983, buyers and sellers have set the value to the dollar, allowing its price to adjust (mostly) smoothly in order to meet supply and demand. The economy has better managed itself.

When Hawke took power the Australian banking system was hopelessly insular and concentrated. Four big banks held 81% of the assets and only one new banking licence had been granted since World War II.

In early 1985 the government injected some real competition into Australian banking, inviting applications for new banks.

Later that year it relaxed restrictions on foreign investment in Australia.

Together these reforms provided a capital-thirsty Australian economy with the much-needed fuel it needed to unlock a huge range of investment opportunities.

The wage-price spirals that bedeviled advanced economies in the 1970s continued in Australia until the prices and incomes Accord of 1983. High inflation had led to large wage claims which further fuelled inflation.

The key was to find a way to break this vicious circle of expectations. The first Accord, which guaranteed wages increases every six months indexed to the consumer price index, did just that. Once people knew that wages weren’t going to gallop ahead of prices, there was less of a reason to raise prices, which put less pressure on wages, and so on.

Although the Whitlam government began the removal of tariff barriers with a dramatic 25% cut in 1973, it was Hawke that began a further and systematic reduction in tariffs and other trade barriers, for some products all the way down to near zero. It was also coupled with adjustment assistance for affected workers (something I have said consistently that didn’t go far enough).

A raft of government assets began to be privatised under Hawke. From the Commonwealth Bank to Qantas, these large Australian companies were lazy, slow-moving, and insulated from competition. Qantas used to fly direct to Rome several times a week. Why? Well, which politician or diplomat doesn’t like a trip to Rome and would want to change at Heathrow?

Removing political meddling and subjecting these companies to competitive pressure ensured they served their customers better, employed more people over time, and provided returns to most Australians through the shares there superannuation owned.

This is an incomplete list of Hawke’s reforms and achievements. And his government left more than a list of accomplishments, however important.

Hawke, and the government he led was the “Third Way” before we knew what that term meant. Before Clinton was Clinton, before Blair was Blair.

It took a Labor government to make these market-oriented reforms. Matched with policies like the reintroduction of Medicare, they reflected an ideology that was pro-market, but also prosocial.

And while Paul Keating as treasurer must surely receive a good measure of credit, so too the then opposition — especially John Howard — for not mindlessly blocking many of the reforms, it was the leadership of Hawke that made it possible.

A charismatic leader, master tactician, and pathbreaking economic reformer. We will miss you, Bob Hawke.