The former High Court judge spoke at the third The Gilbert and Tobin Centre of Public Law Mason Conversation at the Banco court. 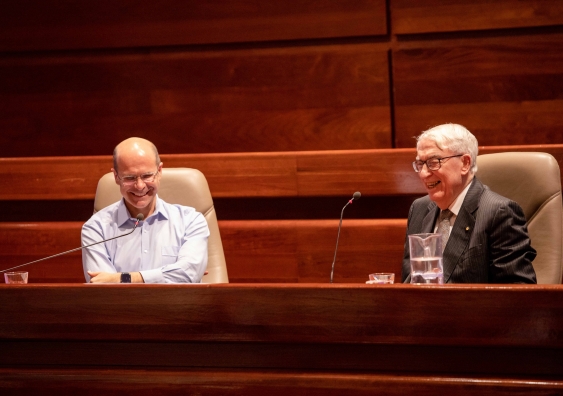 Justice Michael McHugh’s steel worker dad once told him he’d end up on the “pick and shovel” when he quit school at 15. But he ended up a High Court judge who was involved in one of the most famous decisions handed down by the court – Mabo No 2.

Justice McHugh recounted this among other anecdotes as he reflected on his outstanding law career at the third Mason Conversation at the Banco court of the Supreme Court in Sydney on Monday night.

The Mason Conversation is hosted by UNSW’s The Gilbert and Tobin Centre of Public Law. It is named in honour of Sir Anthony Mason and his decades-long contributions to UNSW, UNSW Law and the public law community.

The High Court’s decision in Mabo No 2 in 1992 recognised that native title was, and always had been, part of Australian law. Justice McHugh referred to the Mabo decision when asked about the role of morality as a High Court judge.

“I was very legalistic, I think, so I really didn’t look at the morality of the situation over the law that required a result in my view, or it didn’t. That’s the way I approached it,” he told Professor George Williams, UNSW Law Dean, who was Justice McHugh’s associate in 1992.

“But after you’d heard [senior counsel for Eddie Mabo] Ron Castan’s argument [of cases of native title from other countries] it became obvious that the Crown’s sovereignty, radical title, was subject to the rights of the native inhabitants.

“It just seemed to me that [the case of] Stuart and Cooper which was decided by the Privy Council in 1889 and affects Australia’s terra nullius, was just wrong. And so I had no doubt that we had to overrule.” 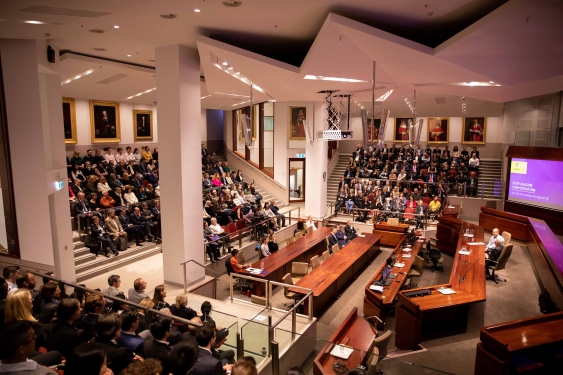 Justice McHugh said that he thought Mabo would be controversial and was surprised how little reaction there was in the first three months after the decision. But he said the political criticism, when it did come, for the decision’s perceived threat to other land rights and for the court being ‘activist’, had no effect on him “whatsoever”.

Another controversial High Court decision he was involved in was that of stateless Palestinian Ahmed Ali Al-Kateb who came to Australia in December 2000, travelling by boat via Indonesia.

McHugh was part of a 4:3 majority in 2004 that said the Government was within its rights to keep Al-Kateb in detention indefinitely, until his refugee claim was settled.

“When I left the court at the end of the argument, I was almost certain I would find in favour of Al-Kateb. But I just didn’t think you could reach a decision ...given the language of the statute,” he said. “I did say in my judgement that if we had a bill of rights...it would be a different result.”

Justice McHugh said he was once opposed to a Bill of Rights but had changed his mind.

“Constitutionally it’s impossible to get through all the states but I don’t see why the Commonwealth can’t exercise the external affairs power to enact a Bill of Rights.”

Director of the Gilbert + Tobin Centre of Public Law, Ros Dixon, told the audience that when she was an associate to Chief Justice Murray Gleeson in 2002, she admired Justice McHugh for three key reasons.

“He combines great seriousness and dedication to justice and the law with a sense of fun...I remember my former boss reminding me to go to bed early and Justice McHugh chiding me for not knowing more about the racing results and other forms of entertainment.”

Professor Dixon said Justice McHugh was the best read person she’d ever met. “He taught me early what it meant to have a deep interest in ideas of all kinds...the third (key reason) is that he’s made a very prominent champion for women in the profession and continues to be today.”

Justice McHugh recalled his early childhood years in Newcastle before moving to the North Queensland town of Collinsville, west of Proserpine, a town which had no running water or electricity and where he laid his first bet at the age of seven. McHugh spent a lot of his childhood riding horses, playing sport and reading widely, including the court reports in the newspaper as an eight-year-old.

“I always had a half-hearted desire to become a barrister,” he said.

The family eventually moved back to Newcastle and he quit school at 15 to earn money like his friends from the nearby housing estate. The decision bitterly disappointed his father, an intelligent man who had always resented the fact that he was forced to leave school at 13 to work in the Newcastle steelworks.

“My relationship with my father for the next ten years was non-existent,” he said.

Justice McHugh tried his hand at a variety of jobs. “Labourer, insurance salesman, a clerk...but I was so bored, I hated it so much.” He was 22 when he noticed a sign advertising for a leaving certificate. “I enrolled, and that’s how (my career) started.”

He said he learnt from Smyth how to cross examine, be a master of every fact in the case, and be flexible.

“Smyth used to conduct a case on a single piece of paper and I did the same. I’d just make a note of what had to be proven by my side to win the case, and then in cross examination, I’d try three of those facts and any fact that would make those upward facts more probable than not. It’s a technique that I adopted.”

Another mentor was Clive Evatt QC, who he said was very charismatic and a jury advocate, and who let McHugh argue all the legal points in the High Court.

“He taught me about court craft and he’s very smooth,” he said, detailing how he helped him pick the judge he wanted and advised him on how to object to another judge’s summing up.

Justice McHugh was appointed a Queen's Counsel (QC) in 1973 and a Judge of Appeal of the NSW Court of Appeal in 1984.

Five years later he was appointed as a judge of the High Court and held this position for 17 years before retiring from the court.

He told the Mason Conversation audience that part of being a good judge was an openness to rethinking one’s prior views.

He noted that on several occasions while on the Court, he got ‘halfway through a judgement’ before realising that his initial opinion had been wrong.

In such a case, he told the audience, “you’ve got to withdraw it and start again”.

On a question about the role of women in law, he noted with pride his record in hiring female associates.

“I think I had 36 Associates over the Court of Appeal and the High Court and 68% were women.”

He suggested that having women represented in the profession in sufficient numbers was important to shaping the law in light of community standards and expectations.

He recalled the views of Justice Windeyer, about the role of social and political context in shaping the law, and suggested they underlined the importance of women’s role on the bench and in the profession.

McHugh currently practices as an independent mediator and arbitrator at Eleven Wentworth in Sydney.

Champions of Indigenous recognition to feature in Mason Conversation