Aboriginal Land Councils and First Nations community representatives from across Australia are urging for a referendum in the first term of the new parliament. 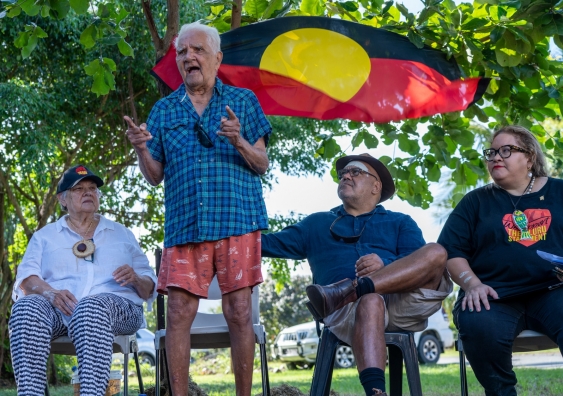 In Yarrabah – an Aboriginal township and former mission on Gunggandji Country south of Cairns – First Nations representatives joined to affirm the Uluru Statement from the Heart and to urge action on a referendum.

The meeting, unexpectedly falling on the day Morrison visited the Governor General, declared “propitious” dates in the 46th Parliament as suitable for a referendum.

The “Yarrabah Affirmation” singled out two dates as having resonance with Australian history: the 27 May next year, or 27 January 2024.

The 27 May 2023 will be the 56th anniversary of the successful 1967 referendum and the sixth anniversary of the Uluru Statement. The 27 January 2024 falls the day after the increasingly incendiary 26 January, referred to as Invasion or Survival Day by many First Nations people. 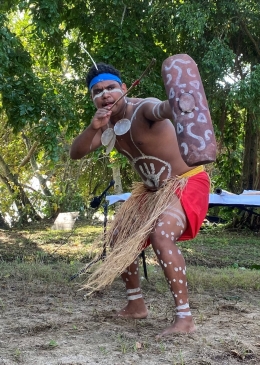 The meeting in Cairns was the first gathering of First Nations dialogue leaders since they issued the Uluru Statement from the Heart in 2017 at the national constitutional convention.

“There can be no more political inertia for our people,” said Cobble Cobble woman Professor Megan Davis.

The professor of constitutional law and Balnaves Chair in Constitutional Law at UNSW – the key architect of the Uluru Dialogue process that produced the Uluru Statement – said the delegates were clear: “This is urgent”.

“We stand together behind the Uluru Statement reforms. This first step, a constitutional Voice, is vital. The work is done, and the time is now.”

Prof. Davis was joined by a large group of key Aboriginal and Torres Strait Islander delegates who were integral to the Uluru Statement, including fellow 2021 Sydney Peace Prize recipients Pat Anderson AO and Noel Pearson.

The Uluru Dialogue, a community legal education project, based at the UNSW Indigenous Law Centre and UNSW Office of the Pro Vice-Chancellor Indigenous, hosted the Cairns Dialogue, bringing together First Nations representatives from “all points of the southern sky”. 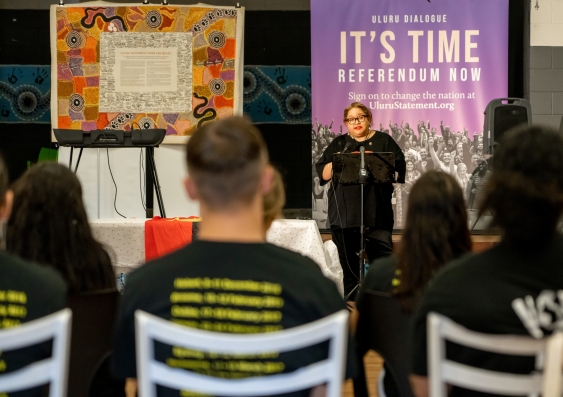 “The stars are aligned. The time for the Uluru Statement reforms is now.”

The Labor party has committed to implementing the Uluru Statement in full, including a referendum for a constitutional First Nations Voice to Parliament.

Opposition Leader Anthony Albanese said that he would seek to have a referendum in his first term if he became Prime Minister in May.

The Coalition government has not committed to a referendum.

A Voice to Parliament would mean First Nations people have a mandated say on the laws and policies that impact them.

On Sunday, under the shadow of the Knowledge Tree in Yarrabah, Alfred “Pop” Neal OAM stood before the Uluru Dialogue group.

The tree, an important meeting place for the local community, is also a site known for political activism and agitation.

Pop Neal, 97 years old, is the last of the “Lantern Movement” and one of few surviving campaigners from the 1967 referendum.

It was here, at the Knowledge Tree, that Pop Neal would gather with fellow campaigners to strategise and plan for what would become the biggest “Yes” vote in Australian referendum history.

Read more: Four years after Uluru, the chance for an enduring Voice dawns

The 1967 referendum changed the constitution so that the Commonwealth had the power to make laws for First Nations people and Aboriginal and Torres Strait Islander people were counted in the census.

Now, in 2022, Pop Neal stood and pointed to the cultural authority gathered at Yarrabah. 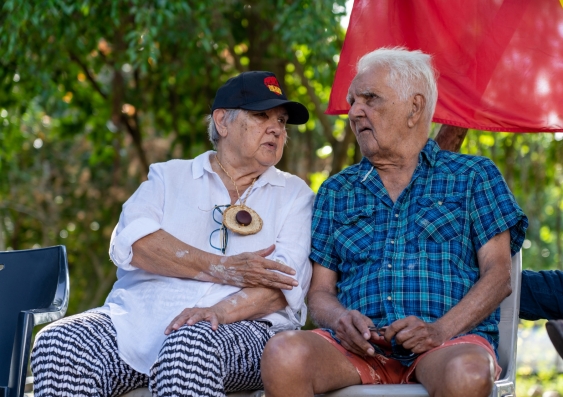 “We come from all over this nation,” he said, referring to the many different First Nations represented.

“And we have been here, always. Forever.

The Uluru Statement was to his right, blowing in the breeze. The words of the Statement cut through the hot humid air: In 1967 we were counted, in 2017 we seek to be heard.

Nearly five years after the historic moment in Uluru, the “Australian people are ready for a referendum,” said Prof. Davis.

Sammy Wilson (Uluru) – Traditional Owner of Uluru who gifted the name to the Statement – spoke of the law, culture and Tjukurpa of his Country and the painting that frames the Uluru Statement.

He spoke of the special moment of coming together at Uluru back in 2017 and how the Uluru Statement reforms need to be realised.

Other delegates highlighted that across the continent, from the heart of the nation to the outer shores in the north, west, south, and east, Aboriginal and Torres Strait Islander peoples continue to call for Voice and Makarrata (Treaty and Truth). 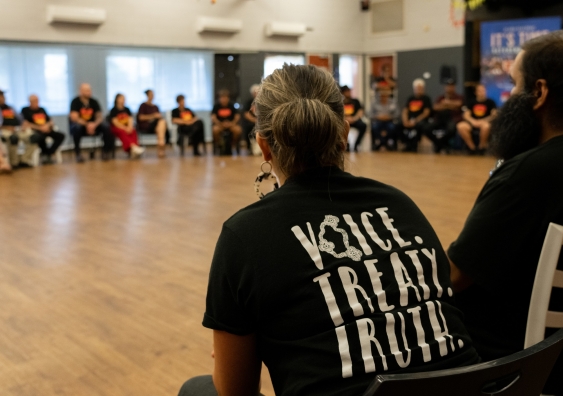 Makarrata is a Yolngu word for coming together after a struggle. Photo: Uluru Dialogue, UNSW Indigenous Law Centre.

“This referendum is the first step in the process to empower our people to take a rightful place in this nation. To come together after a struggle, to have our voices heard,” Prof. Davis said.

At the close of three days of discussion and developing the communique released at Yarrabah, delegates joined in a large yarning circle in the town hall.

Delegates spoke of the power of coming together and having their voices heard. The power of Aboriginal and Torres Strait Islander communities. From young to old, the past and present joined together.

Yarrabah is a place that has felt the brunt of government intervention into Aboriginal lives, a product of the brutal Protection era of legislation in Queensland.

It is also a place of fighting back – a site of Aboriginal political organisation and community activism.

As a federal election nears, a referendum also “beckons”.

“This unfinished business must be addressed,” Prof. Davis says, “the time is now.”

“History is calling us.”