Opinion Indonesia's Ahok swam against the tide, and is now paying the price

The conviction of Jakarta’s Christian Governor Ahok on blasphemy charges is a sign of the tensions at the heart of Indonesia’s legal system, writes Melissa Crouch. 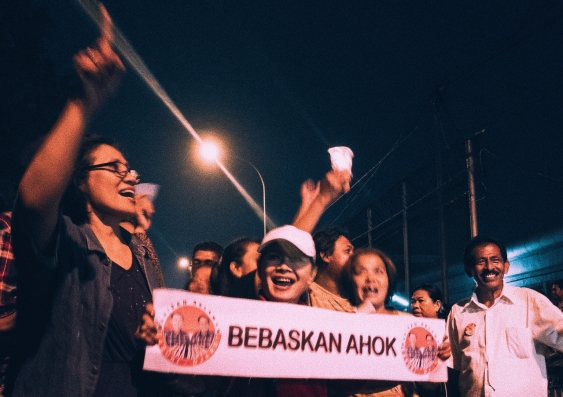 OPINION: What do Nemo, the Archangel Gabriel, a martial arts teacher, and a man who whistled during prayers have in common? They have all been convicted by a court for blasphemy in Indonesia.

Yesterday the global community was shocked by the court verdict in Jakarta, the teeming capital city of the world’s largest Muslim-majority democracy. The outgoing Governor of Jakarta who referred to himself as ‘Nemo’, Basuki Tjahaja Purnama (Ahok), was found guilty of blaspheming Islam.

So not only did Ahok lose an election that he was originally expected to win, but he also lost the biggest blasphemy court case in the history of Indonesia.

Many have commented on the fact that Ahok is a Chinese-Christian. Yet Ahok is not the first Chinese-Indonesian, nor the first Christian, to be found guilty of blaspheming Islam, as my book on Law and Religion in Indonesia explains.

Ahok, though, takes the crown for the most high profile blasphemy case, and sets a record as the first Governor of Jakarta to be convicted of blasphemy.

The trial had become something of a circus, with the proceedings streamed live on national television.

The reason the legal outcome was so surprising to some is that the judges ignored the recommendations of the prosecution. When the court case recommenced the day after the elections, the prosecution had requested that the court convict Ahok for the lesser offence of expressing hostility towards the Muslim community under section 156 of the Penal Code and impose a suspended sentence of two years. Instead, the court found Ahok guilty of the more serious offence of blasphemy under section 156a, and sentenced him to two years in jail.

There have been volumes of commentary on the political dimensions of the recent Jakarta elections for governor. Yet the legal dimensions and the role that the courts have had to play in Ahok’s downfall has surprisingly been overlooked and largely ignored.

The criminal accusations of blasphemy against Ahok were part of a broader legal battle in Indonesia between the courts and the executive, and between religious authorities and the state.

First, the battle between the courts and the executive is evident in the courts’ blatant disregard for the prosecution’s submission. It is unusual that more has not been said about the prosecution’s recommendations for conviction under section 156, rather than 156a, and the two year suspended sentence. This request appeared like a rather convenient concession to Ahok, the day after his resounding defeat at the polls.

The courts, it seems, were not having any of this. That anyone thought that the courts might simply accept the prosecution’s suggestion demonstrates the lack of understanding of the nature of judicial ‘independence’, or what I call judicial defiance, in Indonesia.

Indonesia’s judges are fiercely protective of their independence to a point that it now borders on a gross lack of accountability. On one hand, many commentators have lauded Indonesia’s structural changes in the early years of the transition that introduced ‘one roof’ reforms. These reforms transferred all judicial powers and functions to the Supreme Court, away from the Ministry of Law.

This judicial defiance manifests itself in a range of ways, such as the refusal of some judges to impose a legislative mandatory minimum sentence. These judges reason that no one should be able to tell them what to do. Judges know best with sentencing, they claim, and neither parliament nor the prosecution can limit their freedom in this regard. The judiciary in Ahok’s case clearly seemed to have little regard for the prosecution.

The second legal battle that has taken place is one between religious authorities and the courts. The courts have had to tread a delicate line when it comes to religious-related crimes. In blasphemy cases, the courts have adopted what I call an attitude of ‘religious deference’. That is, the courts will generally acquiesce to the demands of a religious group, preferring not to have to decide on the thorny religious issues themselves.

In Ahok’s case, even firebrand Islamist Rizieq Shihab was called as an ‘expert witness’ during the trial. That the court was willing to entertain such an inflammatory character should have been a cause for alarm. Further, its verdict appears to affirm the controversial claims by a fringe group of Muslim religious authorities that Ahok’s words had blasphemed Islam.

Ahok has already indicated that he will appeal. While many political analysts assumed that the show was over after Election Day, it seems that in fact the show has only just begun.

It’s not all gloom ahead for Ahok. There have been blasphemy cases where the accused has been successful on appeal. In fact, in the blasphemy case of the staff of a controversial Islamic drug and cancer rehabilitation centre, they were acquitted on appeal. Ahok may not be so lucky.

There is one difference though between the Archangel Gabriel, a martial arts teacher, a man who whistled during prayers, and Ahok. The difference is that Ahok is probably the most well-resourced person (in terms of money, legal connections and political influence) to be convicted for blasphemy. So rather than just feeling sorry for Ahok, spare a thought for all the other Nemos who have discovered the high legal price of swimming against the tide in Indonesia.

Dr Melissa Crouch is a Senior Lecturer in Law at UNSW.

This article was first published at APPS Policy Forum. Read the original article.