Opinion Is international law powerless against Russian aggression in Ukraine? No, but it's complicated

The fact that Russia is part of the UN Security Council's powerful P5 group of nations means the UN is in a tricky position when it comes to maintaining peace among its member states. 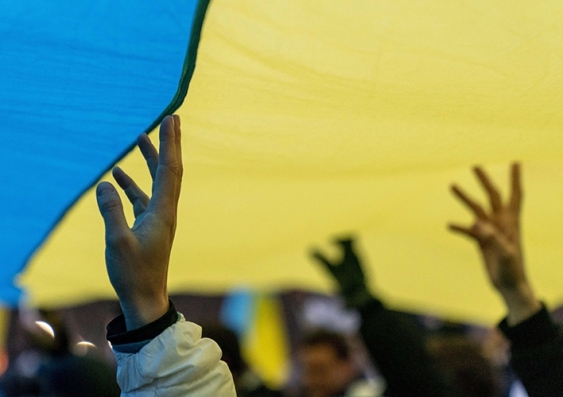 Russia has breached the rules of international law as Ukraine has a right to territorial integrity and political independence. Photo: Andrew Harnik/AP

The world was treated to a grotesque spectacle this week. Russia, the current president of the UN Security Council, launched an invasion of Ukraine while the Security Council was holding an urgent meeting to try to resolve the crisis.

This has many people asking whether there is any point to international law – is it powerless to control the conduct of states?

Has Russia broken the law?

Yes. There is no question Russia has breached the rules of international law. Ukraine has a right to territorial integrity and political independence. Russian “recognition” of the independence of Donetsk and Luhansk does not change this, nor do any historical claims to Ukrainian territory on the part of Russia.

Russia has also committed an act of aggression against Ukraine. Aggression is an old concept in international law, predating the creation of the UN.

War has been outright illegal since the 1928 Kellogg-Briand pact. The charter establishing the International Military Tribunal at Nuremberg in 1945 also declared the “planning, preparation, initiation or waging of a war of aggression” to be crimes against peace.

Finally, Russia’s acts constitute a serious breach of the UN Charter, which states:

All members shall refrain in their international relations from the threat or use of force against the territorial integrity or political independence of any state.

What can the UN Security Council do?

But what is the point of all this international law if Russia can still invade Ukraine? Where is the enforcement?

Article 24 of the UN Charter grants the Security Council primary responsibility for the “maintenance of international peace and security”. This includes taking collective measures to prevent and counter threats to peace and suppressing acts of aggression.

The UN was established specifically to prevent a global war between great powers from happening again. And since we haven’t seen this sort of event in the past 75 years, the UN has been largely successful at this primary goal.

But here’s the rub: the UN Security Council (and the UN Charter more generally) was established by the allied powers who “won” the second world war. In establishing the UN, these powers (China, France, the UK, the US and Russia as successor state to the USSR) were positioned functionally above the law.

They were made permanent members of the Security Council (known as the P5) and given veto power over UN action.

This was done expressly to prevent the UN from being able to take action against them and to allow them to act as a balance to each other’s ambitions. The system only works, however, when the P5 agree to abide by the rules.

This worked through the Cold War because no P5 state felt comfortable enough in its own power to act unilaterally and upset that balance. Once that uneasy balance of power fell apart with the collapse of the USSR, the willingness of the P5 members to act with restraint began to chip away.

The same scenario is playing out now, with Russia as the aggressor. The restraint of the P5 in their use of military action has been hanging by a thread for decades. We may have just seen it permanently snap.

Are there other responses under international law?

Russia’s ongoing transgression of the law is not the end of the story. There are other ways international law can be used to either defend Ukraine or punish Russia that go beyond economic sanctions.

One option is the invocation of Article 51 of the UN Charter, which gives states the right of individual and collective self-defence.

Ukraine can legally use force to defend itself from attack, and moreover, can request military assistance from other countries. When Iraq invaded Kuwait in 1990, Kuwait issued a number of such requests to help it defend itself.

Questions have also been asked about whether Russia could be stripped of its permanent membership on the Security Council. 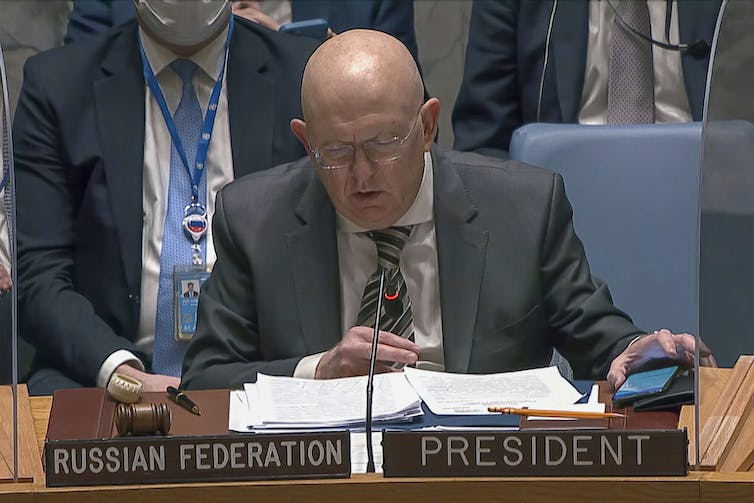 The simple answer is no. Arguments are now being made that Russia should not have inherited the USSR’s seat on the council. But all the states arising from the collapse of the USSR (including Ukraine) did agree to this in 1991.

As for the question of reforming the UN Charter to remove Russia, that is also functionally impossible.

While Article 108 of the UN Charter does allow for amendments, it requires all of the P5 to agree. So, in order to remove Russia from the Security Council, Russia would have to agree, and that’s never going to happen.

This, again, is by design, so the P5 would feel confident in their security when taking action to police the world. Unfortunately, peace can’t be enforced when your enforcer is the one breaching the peace.

Can Putin be prosecuted for crimes?

There is also international criminal law. Putin has committed the crime of aggression by launching an illegal war, and any Russian war crimes on Ukrainian territory are within the jurisdiction of the International Criminal Court (ICC).

But Putin will not stand trial before the ICC for aggression, due to the court’s narrow jurisdiction. Uniquely, both the aggressor state and the victim of its actions must be parties to the Rome Statute, the treaty that established the court. Ukraine is a party to the Rome Statute, Russia is not.

So, the ICC has no jurisdiction over Russian aggression without the Security Council referring Russia to the court as a non-party. And, of course, Russia can veto this action as a permanent member of the council.

While the ICC also has jurisdiction over war crimes, tying a president to the crimes of foot soldiers is complex and not something the court has ever succeeded in doing.

However, the ICC is not the only game in town. Any country in the world can prosecute grave war crimes, such as intentionally attacking civilians.

And countries can prosecute nationals of other states for aggression, if they have laws in place to do so. Germany, the Netherlands, Ukraine and even Russia all have such “universal jurisdiction” laws that apply to acts of aggression.

Similarly, the doctrine of command responsibility is also subject to universal jurisdiction. So, war crimes prosecutions need not stop with front-line soldiers.

However, the difficulty with universal jurisdiction is bringing suspects into custody. Heads of state, in particular, are generally immune from being prosecuted for crimes in foreign courts.

Not only that, for such prosecutions to happen, Russian political and military leaders would need to be removed from their posts, arrested and then extradited to face trial.

So, in the short run, will anyone be hauled before a court? No. In the long run? Maybe.

Meanwhile, the job of the international community is to gather evidence of crimes as they occur, and to support Ukraine’s right of self-defence. International law is there, states now must use it.