Opinion Manus detention centre: Australia is still responsible for these men — and those who haven't made it this far

It is important to keep in mind all of the men caught up in Australia's abrupt withdrawal from Manus Island, writes Madeline Gleeson. 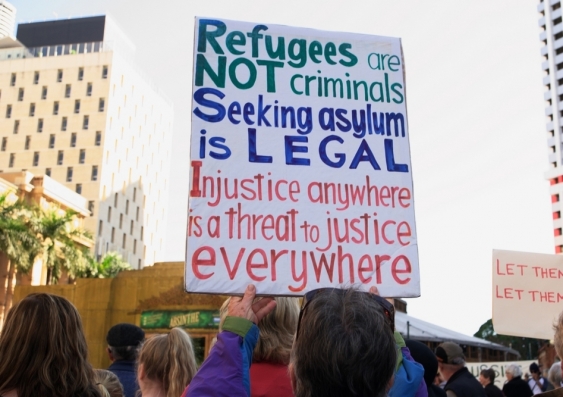 OPINION: Australia has "closed" the Manus Island detention centre, and all eyes are on the hundreds of men who have barricaded themselves in, refusing to move to the "transit" accommodation in nearby Lorengau for fear of what awaits them there.

All Australian security personnel and essential services have been withdrawn, leaving the men to fend for themselves.

While that story unfolds, let us keep in mind the other men caught up in the chaos of Australia's abrupt withdrawal from Papua New Guinea.

For some, it is already too late. Six men have died on Manus, or following urgent medical evacuations to Australia: Reza Barati, head bashed in with a rock; Hamid Khazaei, a slow and painful death from an untreated infection; Kamil Hussain, drowned; Faysal Ishak Ahmed, head injuries from a fall and seizure; Hamed Shamshiripour, apparent suicide; a Sri Lankan man, apparent suicide.

The future is fraught

For others, alive and supposedly "settled" outside the detention centre (either in Lorengau or elsewhere in PNG), the future is fraught.

UNHCR, which has a long history of supporting refugees in PNG, has repeatedly warned that refugees transferred from Australia would face "formidable challenges and protection concerns" integrating into the socio-economic and cultural life of PNG.

Indeed, historically UNHCR has been obliged to resettle "non-Melanesian" refugees elsewhere, including Australia, precisely because of severe limitations on finding safe and effective durable solutions in PNG itself.

PNG's National Refugee Policy exhibits a willingness in principle to settle refugees, but only where they are self-sufficient, or where all costs for their settlement are agreed with third countries in advance.

Most of the more than 600 men found to be refugees on Manus Island are likely to face insurmountable obstacles to self-sufficiency. And even if Australia does agree to bankroll the costs of their stay in PNG indefinitely, this still will not amount to a durable solution.

Those who aren't refugees

Then there are the men who have had their claims for international protection assessed and denied. PNG calls them "non-refugees", but can this label safely be ascribed to them?

There are almost 200 men who have received negative decisions, but whose claims warrant further inquiry.

This group includes some 70 men who did not engage with the refugee status determination process, yet were found not to be refugees anyway. Many of the remaining 130 men have difficult cases, and there are various reasons why their negative decisions should be reviewed.

PNG immigration officials have worked hard to develop a system and build their capacity to assess claims, but are still relatively new to this complex task.

These factors underlie concerns about the soundness of certain negative decisions, and speak against deporting "non-refugees" until the validity of their protection claims can be properly determined.

Returned to the danger they fled

And finally, spare a thought for the men who have already departed Manus. The PNG immigration department claims that almost 600 men have returned "voluntarily" to their countries of origin from Manus Island, with seven more being "deported".

Taking each of these groups in turn, most of those who agreed to be repatriated did so in the first few years. Since 2015, despite riots, deaths, deteriorating conditions and grave fears for their safety, very few men have in fact "volunteered" to return home.

For those men who do request to return, essential procedural safeguards have not been followed. Within the "return-oriented environment" of the Manus detention centre, men have not been provided with adequate information and counselling about the risks in their home countries to allow them to make properly informed choices.

Moreover, many of those who have been pressured by the difficult conditions of detention or by Australian officials to "volunteer" for repatriation include men with serious mental health issues or other vulnerabilities, making it doubtful their decisions could ever be considered truly informed and voluntary.

They include the likes of 29-year-old Eyad, who agreed to be flown back to Syria to rescue his wife and infant daughter, born while he was in detention.

Eyad says he was tortured for 20 days by Syrian government intelligence officers demanding to know where he got the cash given to him by the Australian government as a repatriation incentive.

When he finally made it back to his village his house had been bombed, and his wife injured.

As for the seven men the PNG government say they "deported", this figure raises two questions. Given concerns about the procedures for refugee status determination and the apparent lack of an effective appeals mechanism on Manus Island, how certain can we be that they were not returned to serious harm and persecution contrary to Australia and PNG's international obligations?

And why do Australian immigration department figures report only two people ever being returned involuntarily from either Nauru or PNG?

PNG's position is that it has "no obligation' to deal with "non-refugees" nor with refugees that do not wish to settle there. But all the men Australia has left there have critical needs that must be met, sensitively and with urgency, by Australia and PNG together.

Australia continues to have responsibility for the men transferred to PNG against their will, as well as an ongoing obligation to find appropriate solutions for them.

It will take more than shutting off the electricity for Australia to close this dark chapter of its immigration history.

Madeline Gleeson is a lawyer and senior research associate at the Kaldor Centre for International Refugee Law at UNSW. She is the author of Offshore: Behind the Wire on Manus and Nauru.

This article was originally published by ABC Online.