The AGSM MBA Program has been ranked as the leading full-time program in Australia and 41st in the world by the UK's Financial Times. 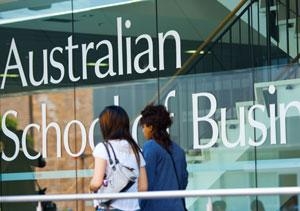 The AGSM MBA Program has been ranked as the leading full-time MBA program in Australia and 41st in the world by the UK's Financial Times.

Professor Chris Styles, AGSM Director and Deputy Dean of the Australian School of Business, said the ranking confirmed the strength of the AGSM MBA program.

"It is a rewarding result, that in our 35th anniversary year we have again been named as one of the top Business Schools in the world,” said Professor Styles. “The ranking is a reflection of the calibre of students who are attracted to our program. It highlights the impact the AGSM MBA has on them personally and how they, in turn, use it to have impact in their organisations and communities."

The Financial Times surveyed MBA alumni who graduated three years ago, so AGSM MBA alumni who graduated in 2008 participated in the current survey. For 2011, these alumni earned an average salary of nearly US$119,000 (AUD$111,950) representing a 90% increase of their average salary over the three years since graduation, compared with their pre-MBA salary.

Professor Styles said: “These latest rankings reflect our mission to be the premier graduate school of management in Australia, a leader in the region and a peer in good standing with graduate schools of management globally. The results also confirm other recent strong performances by AGSM in the Forbes and Poets and Quants*rankings where our MBA was ranked respectively as the 9th and 20thoutside the USA.”

Last week marked the arrival of new students starting in the full-time AGSM MBA class of 2013.  Professor Chris Styles said:  “The MBA continues to attract a diverse group of highly talented students who are sought after by employers in a range of sectors. The standard of the students admitted into this year’s cohort is exceptional.  They are joining an elite group from around the world who have come together to create a rich and rewarding learning environment, and who will become the core of their professional network throughout their career.”

“This year’s full time AGSM MBA students come from 20 countries and one third are female - one of the highest proportions globally. They have diverse professional and cultural backgrounds and an average of seven years of work experience.  They provide a high quality and richly diverse resource for learning from each other as well as from our teaching staff.”

The 2012 Financial Times MBA rankings show Stanford and Harvard at the head of the list followed by Wharton and London Business School.

Can PwC transform itself?