As Qantas chief Alan Joyce took his seat at Meet the CEO, an Australian School of Business alumni event, the audience was asked “Is Joyce the craziest or the bravest CEO in Australia?” 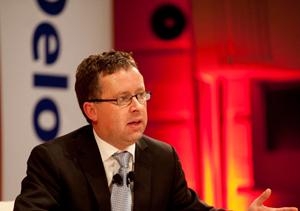 As Qantas chief Alan Joyce sat down for Meet the CEO, an Australian School of Business alumni event, the audience was asked a contentious question – “Is Joyce the craziest or the bravest CEO in Australia?” The majority of the audience opted for "the bravest" and Joyce went on to discuss what it takes to make tough decisions in the face of public backlash.

Interviewed by Narelle Hooper, Editor of AFR Boss magazine, Joyce maintained that the recent grounding of the Qantas fleet in the face of union disputes was a decision made in the best interests of the airline.

“In the weeks leading up to our annual general meeting traffic on our east coast routes was down 40 percent. I had three choices: we could give in to the unions, keep going with the faltering negotiations; losing more money and time; or lockout and ground all planes, which would provide certainty for shareholders and customers."

Tough decisions come with the territory and it’s always about doing the right thing by Qantas, Joyce said.

“There is no other company in the world with the history and reputation of Qantas. When you get this amazing job as CEO, you always want to do the right thing by the company no matter how tough the call at the time.

"I don’t want to look back and wish I had made the right decision by the company but didn’t make the call because it was too tough.”

The ongoing industrial relations dispute is just one of numerous crises faced by the airline over the last 12 months. Joyce’s crisis management strategies have been put to the test with the grounding of the A380 fleet last November after an engine explosion in Singapore, followed by cyclones and floods in Queensland, a tsunami in Japan and earthquakes in New Zealand.

The trick  to dealing with these tough times is to compartmentalise life, he said. “I am able to go home and switch off. I suppose that it is my background in mathematics and physics. I have always been able to compartmentalise my life very easily.”

Joyce spoke candidly about his working class upbringing in Dublin, where he was always encouraged to think big, work hard and start each day at an early hour. From the beginning of his career in the aviation industry at Aer Lingus, Joyce set himself the goal of becoming an airline CEO before the age of 40. He successfully achieved his goal at 36 with Jetstar.

Meet the CEO brings together Australian School of Business Alumni, sponsors and donors, giving access to business leaders whose innovation, entrepreneurship and leadership are changing the business landscape.

New Dean for the Australian School of Business