Migration cuts – and tourist cuts – could hurt the economy

Migrants aren't the only ones who could be accused of putting a drain on the system, says UNSW Business School Adjunct Professor Raja Junankar. 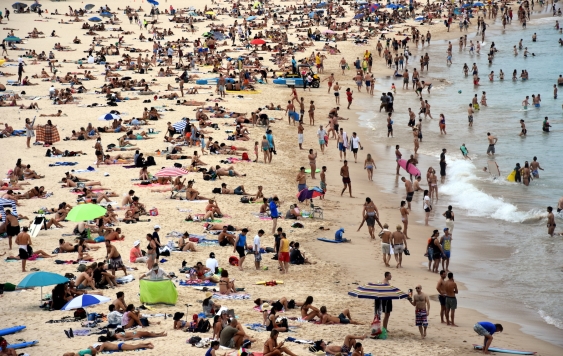 Crowding up the joint: tourists add to the mix on Bondi Beach. Photo: Shutterstock

“Australia could house around 90,000 more migrants if we no longer let in tourists,” says Adjunct Professor Raja Junankar of the UNSW Business School. “Indeed, if Australia is to cut down on immigration, it would also then make sense to introduce policies that limit numbers of international tourists and students.”

Permanent migration to Australia is to be capped at 160,000 for the next four years, and a new skilled worker visa, covering 23,000 entrants and requiring three years’ residence in the regions as a condition for securing permanent residency, will be introduced under the Morrison government.

However, Professor Junankar suggests that if Australia wants to cut down on immigration, we should also look at international tourists and students.

“Economically, if any person living in Australia drains a certain amount of resources, it stands to reason this is also the case with short-term visitors arriving year after year. Not only do they add to crowded public transport, demand for housing, such as Airbnb, they also consume environmental resources, such as the water hotels spend on frequently washing their sheets.”

Just as with migration, tourist numbers are on the rise in Australia. The number of international tourists increased from just more than 4 million in 1997-98 to more than 8.6 million in 2016-2017.

In his discussion paper 'Is Australia overcrowded? Immigration and International Tourism', Professor Junankar has found that international tourism for Australia is not simply a major earner but also increases aggregate demand in the economy.

He says immigrants, and tourists, should be welcomed. “However, if people believe that Australia is overcrowded and congested, we should also consider cutting back on international tourism, despite the huge positive contribution to the Australian economy they make.”

Why business leaders must invest more in people