We can thank a single-minded mother for nurturing the ambition of former Chief Justice of the High Court Sir Anthony Mason. 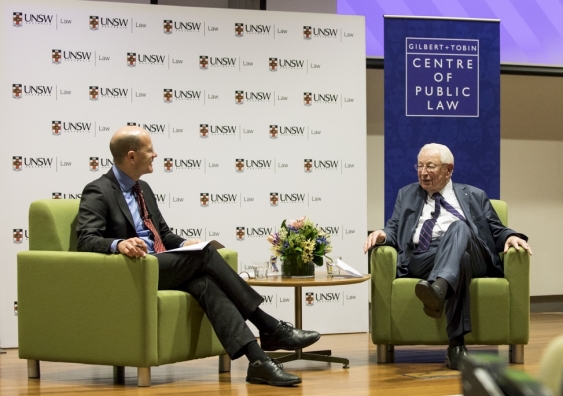 Australia can thank a determined mother for setting her son on a path that would lead to him becoming Chief Justice of the High Court of Australia.

He was happy to go along with her plan: “It seemed to me that to be a barrister was a pretty good thing and I’ve never changed my mind about that, except perhaps that being a judge is an even better thing.”

The first Mason Conversation, hosted by UNSW Law and the Gilbert + Tobin Centre of Public Law, featured Sir Anthony in conversation with UNSW Dean of Law Professor George Williams. The former Chief Justice’s famous wit was in evidence as he reflected on his school years, his wartime service in the RAAF, studying law at the University of Sydney, joining the Bar, landmark cases that came before the High Court, including Mabo and Cole v Whitfield (relating to a personal individual right of freedom in interstate trade), and his role in the dismissal of the Whitlam government.

His school education, he recalled, was unremarkable save for one incident when a senior maths teacher was marking students’ test papers. Noting young Anthony’s disappointing marks, the teacher was blunt: “They say fish is good for the brain, I advise you to eat a whale for breakfast.” As the class laughed heartily, Anthony decided against pointing out that a whale was not, in fact, a fish.

During World War II Sir Anthony served in the RAAF although he was at pains to put that service into context. “I was only in the Air Force for about 20 to 21 months. Unfortunately, although I’ve told my wife I was a war hero … the Germans never suffered any destruction at my hand.”

After the war he enrolled in an arts/law degree at the University of Sydney. He noted that today’s law students, 50% of whom are women, might be surprised that there were no more than about 10 women in a class of 300, and that the lecturers were mainly practising lawyers rather than academics.

“And by the way, the lecturers talked at you, they didn’t invite any discussion as you have these days. And some of them were not very good,” he said.

Notable exceptions were Professor Julius Stone and Professor William Morison as well as John Holmes, a practising barrister who was “responsible for my continuing interest in constitutional law”. 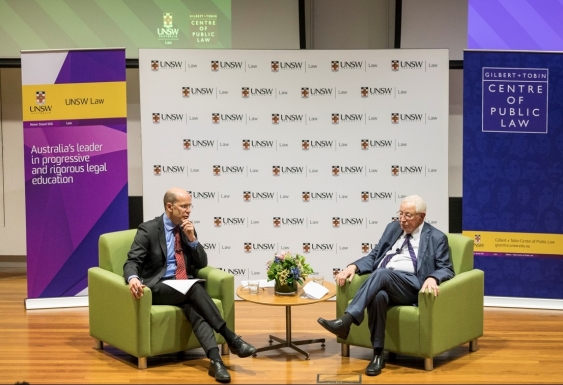 Sir Anthony achieved his ambition of moving to the Bar, which he enjoyed immensely. “I enjoyed being a barrister. I had a lot of good fortune as a barrister and got work from the Commonwealth Crown and State Crown from almost the beginning of my career,” Sir Anthony recalled.

In 1969, at the relatively young age of 44, Sir Anthony was made a judge of the Supreme Court of New South Wales. Admitting that he was ambitious, he recalled: “I thought in terms of ultimate appointment to the High Court it would do me no harm to be associated with the state judiciary.”

His strategy worked and he was appointed to the High Court three years later. One of the most significant judgements of the court in his time was the Mabo ruling, which found that the assertion of British sovereignty had not extinguished native title in 1788.

Sir Anthony said that when handing down the decision he was aware that it would cause controversy but an election campaign kept that controversy at bay for six months. After the election it hit like a storm.

“I must say, the controversy when it did arise was greater than I thought it would be,” he said, referring to hysterical warnings that people’s back yards would no longer be safe.

Asked about his views on his role in the 1975 dismissal of the Whitlam government by Sir John Kerr, Sir Anthony said his answer was delivered with the benefit of hindsight and he “would have taken a different approach”. When he began his discussions with the Governor-General he certainly had not foreseen the “very considerable” controversy that would ensue.

He made no public comment on his role until a statement in 2012 following revelations that letters written by Sir John, and held by the National Archive, were to be used in a Whitlam biography. “I thought the proper approach for me to take was to set out the facts of my relationship with Sir John Kerr and leave it to other people to make their comments for or against participation by judges in advising the Governor-General,” he said.

Asked by one audience member what three changes he would make to the Constitution if were drafting it, Sir Anthony said he would not actually change sections but would include provisions that would clarify some of them. But he would contemplate the possibility of changing Section 128, which provides that any proposed law to alter the Constitution must be passed by an absolute majority in both Houses of the Commonwealth Parliament, to enable easier amendment.

He would also include a provision that avoided the current complexity in relation to Federal jurisdiction.