Opinion Obama, Trump, Clinton and the affordances of distance

Change in the White House … Change in the Congress, compliant and corrupt … Change won’t come from the top … Change will come from a mobilised grass roots. Lines from Donald Trump? No, they are from Barack Obama, writes Christopher Kremmer. 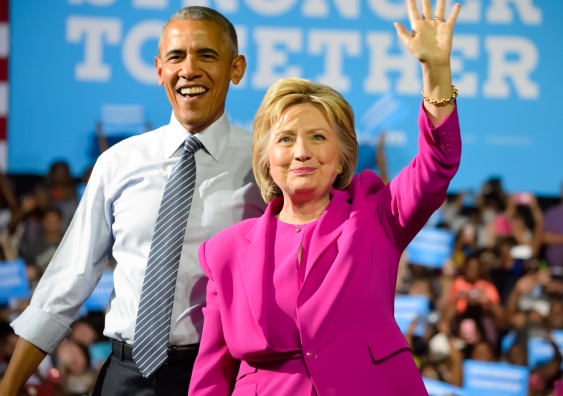 Lines from a Donald Trump speech? No. The author of those words is the soon-to-be former president Barack Obama. In 2008, he was the candidate of change, but he also packed a powerful personal story that embodied change. Americans voted for his policies, for the man, and for what he represented. And what he represented was the one good thing that leapt from Pandora’s Box — hope.

Rhetoric in politics is like fuel in a car — without it, you’re going nowhere. Rhetoric engages and mobilises the public when democracy needs its input to sort out important matters, like who governs, or winning a war. Its job — especially important under an optional voting system — is to make the normally disengaged citizenry care a lot for a little while. Argument persuades. Narrative convinces.

As a campaigner, Obama brilliantly harnessed the power of narrative and rhetoric. But in office, his more cerebral, analytical side came to the fore. He often seemed distant, a quality generally seen as problematic in politics. In fact, distance is a much underrated asset for politicians and writers, and as Obama prepares to leave office, we are left to ponder the affordances of distance, framing and voice — all literary techniques — in the context of an overheated election campaign.

Compared to Trump, Obama chooses his words with the care and precision of a heart surgeon. It’s there in that characteristic pause before he opens his mouth or expresses his next thought. Caution. Deliberation. He talks like a writer, because he is one.

Writers — like politicians and photographers — frame stories, images and issues. A frame excludes in order to focus the audience’s attention on the character or subject the writer wishes to highlight. To write about anything means to distance yourself and your readers from many other things. The frame excludes competing narratives.

All this year, America’s political leaders have been framing themselves and their issues, aiming to control the agenda and defeat their opponents. Framing tells us what to think about, but avoids telling us what to think. It that sense, it is more powerful than rhetoric, which can too easily be exposed as empty.

Trump is a master of rhetoric, Clinton adept at framing, but in the coming months they and Obama will, of necessity, resort to distancing as they construct new narratives about themselves and begin to speak in the different voices appropriate to their future roles.

Obama does distance better than anybody. He didn’t learn about it from a political coach or literary scholar. He learnt it from life, inherited from the distances within and between his troubled families and the races that his ancestry mixed. Having lived it, he wrote about it, compellingly, in his 1994 memoir, Dreams From My Father: A story of race and inheritance.

The book tells of his long struggle to understand his own identity as the child of a white woman and a black man in a country where, in his grandfather’s time “unspoken codes” kept contact between races to a minimum", with blacks reduced to “shadowy, silent presences that elicit neither passion nor fear.”

Born in Hawaii, the son of a Kenyan intellectual and American mother, he would spend part of his childhood in Indonesia after his parents separated and his mother fell in love with a Javanese. It was not until college that he spent any significant time in the mainland U.S. Apart from the fact of being born in America (which Trump denied for years, only to recant without honour or grace during the campaign) Obama’s formative years were spent in places far distant from the nation’s heartland.

never got the girl on I Spy, (and) that the black man on Mission Impossible spent all his time underground. I noticed there was nobody like me in the Sears Roebuck Christmas catalogue…and that Santa was a white man.

Distance from his father, distance from mainstream culture, distance from his multiple homelands. Like many children who’ve been raised in challenging circumstances, the young Barack developed resilience, a healthy scepticism, sturdy values, wry humour and an ironic wit.

Then, when he graduated from college, Obama went to work as a community organiser in deprived districts of New York and Chicago, where he came face to face with the distance between the American Dream and the less shiny reality that millions of Americans experience daily.

Like the unlucky child he once was, the mature Obama retains his stoicism. That’s what makes his story so heartbreaking and ultimately redemptive, the idea that one can rise above life’s inevitable travails. But stoicism is really just another form of distancing.

Trump’s framing and distancing is of a different kind. The billionaire former confidante of the Clintons has, with great energy and skill, framed himself as an outsider. This utterly confected persona has helped him to mobilise millions of Americans who feel betrayed by the American Dream.

In a declining superpower there is always plenty of blame to go round, and a maddening absence of solutions to the decline. This reactionary climate has allowed Trump — with a little bit of help from the FBI — to neutralise his many obvious shortcomings as a candidate.

Conversely, Hillary Clinton’s legitimate claim to the mantle of outsider, courtesy of her gender as the first woman to have a shot at becoming president, has faltered. A loss for the former Secretary of State will be blamed on an inability to shed the label of Washington insider.

Whatever the outcome — and if it’s as close as the polls suggest, the final result might be a while coming — Barack Obama will be packing his bags, and making room for a new incumbent. He will distance himself — quite literally — from what must be the out-of-body-experience of being the single most powerful human on earth for eight years.

Yet, ironically, Obama being Obama, there was always that slight sense of distance between himself and the job, a feeling that he never took the whole thing too seriously. At the end of this unedifying election campaign, that seems to me to be the greatest blessing that distance affords.