Paying tribute to Ball and Brown

UNSW has hosted more than 100 of the world's most eminent accounting and financial academics at a conference in Sydney to celebrate the 40th anniversary of the publication of the acclaimed "Ball and Brown" accounting research. 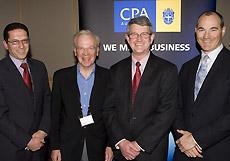 UNSW has hosted more than 100 of the world's most eminent accounting and financial academics at a conference in Sydney to celebrate the 40th anniversary of the publication of the acclaimed "Ball and Brown" accounting research.

Professors Ray Ball and Philip Brown, two of UNSW's most academically distinguished graduates, published the prestigious 'An empirical evaluation of accounting income numbers', in the Journal of Accounting Research in 1968. They were guests of honour at the conference, which attracted 120 leading academics in the field.

"The Ball and Brown paper has been widely acknowledged as the most influential piece of accounting research at that time. It truly represented the start of modern capital markets-based accounting research," Professor Alec Cameron, Dean of the Australian School of Business, told the conference.

"Ray and Philip's research transformed our understanding of the effect of corporate disclosure on share prices, and of earnings releases in particular," he said.

Philip Brown was UNSW's inaugural first class Honours graduate in Accounting and a University Medallist. He graduated in 1963, then went to the University of Chicago for his graduate studies. He returned to UNSW in 1975 as the inaugural Dean and Director of AGSM. Philip now has a joint appointment with the Australian School of Business and the University of Western Australia

Ray completed a first class Honours degree in Accounting at UNSW in 1965. He returned in 1976 as Foundation Professor of Finance at AGSM. He is now the Sidney Davidson Professor of Business in the Graduate School of Business, University of Chicago.

The two academics first met at UNSW when Brown was Ball's first year tutor in introductory accounting. They both continued their research at the University of Chicago, which was an intellectual hothouse in the area of accounting and economic research.

A number of distinguished academics gave papers at this week's conference, including Professor Ross Watts from the Sloan School of Management at Massachusetts Institute of Technology, Professor Doug Skinner from Chicago University, Professor Stephen Penman from Columbia University and Professor Paul Healy from Harvard Business School.

Conference papers are available at: Ball and Brown Tribute Conference

ASB to partner with Wharton