Opinion Penny wise, pound foolish: how to really save money on refugees

At a cost of A$826 million, the processing and detention of around 2,500 asylum seekers on Nauru and Manus Island is a scandalous waste of taxpayers' money, write Joyce Chia and Claire Higgins. 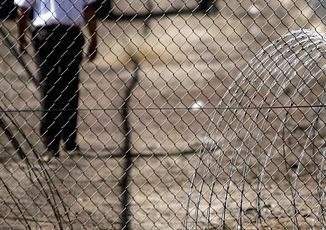 OPINION: At a cost of A$826.1 million in the 2014-15 federal budget, the processing and detention of around 2,500 asylum seekers on Nauru and Manus Island is a scandalous waste of taxpayers' money. The government’s own data shows that offshore processing is wildly expensive in comparison to onshore alternatives. The Commission of Audit reported earlier this year that detaining a single asylum seeker for one year offshore costs more than $400,000.

Late last month, the government announced that it would withdraw $140,000 in annual funding for the Refugee Council of Australia, the nation’s peak body for refugee organisations. This is just one example of how the government is looking to save a few dollars while ignoring the obvious way to save real money – processing asylum seekers in Australia.

Even detaining asylum seekers in Australia is vastly cheaper than detaining them offshore. As the Commission of Audit reported, it costs $239,000 a year to hold an asylum seeker in a mainland detention centre (or around half the cost of Manus Island or Nauru).

The Commission of Audit described the detention and processing of boat arrivals as “the fastest-growing government program over recent years”, with expenditure skyrocketing from $118.4 million in 2009-10 to $3.3 billion in 2013-14. To put this into perspective, the United Nations High Commissioner for Refugees (UNHCR) is responsible for 11 million refugees and 38.7 million “people of concern” globally with a total budget of US$5.3 billion.

Although it is unclear from the Commission of Audit’s report exactly which costs were included in its calculations, these figures almost certainly underestimate the true economic cost of Australia’s refugee policy. For example, the figures probably don’t include the extra foreign aid given to countries hosting our offshore processing centres. Papua New Guinea received an extra A$420 million in foreign aid over four years for agreeing to process and resettle all asylum seekers who arrive by boat.

There are also the unknown costs of the Operation Sovereign Borders Joint Agency Task Force, spread as it is over several government departments.

Even though the Commission of Audit identified bridging visas as the most affordable option, the government denies many asylum seekers on bridging visas the right to work. It thereby forfeits their taxes and the extra consumer spending their incomes might generate, and places an additional financial burden on local charities.

This policy is also depriving the Australian community of potential long-term contributors. Demographer Graeme Hugo’s 2011 study A Significant Contribution found that refugees have yielded “a unique demographic dividend” to the Australian population as a young and notably entrepreneurial cohort, which fills labour shortages and makes a vital contribution to regional economies.

Choosing to process asylum seekers offshore or onshore without work rights is not just an unnecessary waste of taxpayer dollars, it is also a long-term social and economic loss.

The human cost of Australia’s refugee policy is equally staggering.

Asylum seekers on Manus Island and Nauru lack quality psychiatric and medical services. The UNHCR and Amnesty International have found that conditions in these facilities constitute cruel, inhumane or degrading treatment under international law. One asylum seeker, Reza Berati, has been killed in offshore detention. Many have suffered physical and mental injuries.

Tragically, the bridging visa system may be economically favourable but it does not necessarily offer asylum seekers any greater certainty or comfort. Recently, unacceptably long delays in processing and the fear of deportation exacted the highest price when Tamil asylum seeker Leorsin Seemanpillai self-immolated and later died.

There are also intangible costs associated with Australia’s treatment of asylum seekers.

Most important is the damage to Australia’s international reputation. This includes the imperilling of Australia’s relationship with our largest neighbour, Indonesia, and the undermining of our own efforts to improve human rights protection in the Asia-Pacific.

Less visible – but just as important – are the intangible costs to the Australian public. Australia’s refugee policy undermines its own commitments to human rights, the rule of law, and transparency and accountability. Asylum seekers are detained offshore not just to send a warning to prospective boat arrivals, but also to keep them out of sight of the Australian public and out of reach of Australian lawyers, media and even Australia’s own Human Rights Commission.

Whichever way you add up the sums, Australians pay far too high a price for the government’s refugee policy. Last week, immigration minister Scott Morrison reiterated that this “pound foolishness” would persist. Labor too confirmed its steadfast commitment to offshore processing.

It seems we are prepared to pay almost anything to appease Australia’s irrational fear of asylum seekers who arrive by boat.