Countries like Australia take refugees to serve broader purposes, including to enhance their international image and to gain leverage in international politics, argues Claire Higgins. 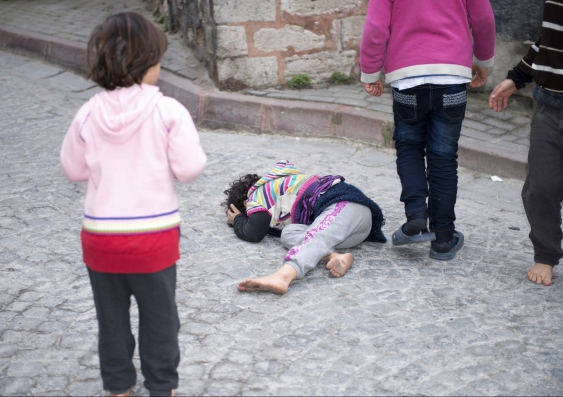 Refugee children from Syria in Istanbul

OPINION: Following a community outcry over the plight of asylum seekers in Europe, the Australian Government has announced that it will resettle 12,000 Syrian and Iraqi refugees. This will be in addition to the annual refugee and humanitarian intake of 13,750. Prime Minister Tony Abbott has described the increase as demonstrating that Australia is a 'generous' country which seeks to be 'the best possible international citizen'.

This language is telling, and reflects an important nexus between refugee policy and foreign policy. Since Australia is recognised overseas as having an asylum policy that contravenes international law in a number of respects, the increased refugee intake is as much for the nation's image abroad as it is for domestic political ends.

The way that states respond to refugees has always been shaped by various political and strategic interests. This is not to diminish their humanitarian motivations, but to say that these are underpinned by broader priorities. For instance, studies show that refugees can be a young and entrepreneurial addition to a nation's population. In other ways, the priorities may be outward-looking – a generous refugee policy can serve to enhance a state's international reputation. Accepting refugees is a way of signalling that a nation is prosperous and kind-hearted.

In strategic terms, refugee resettlement can serve a distinct purpose. During the Cold War, refugees from the Soviet Union became 'symbols of foreign policy' in the West, their defection an ideological victory.

Today, the acceptance of an additional 12,000 refugees may provide Australia greater leverage in international debates about the Syrian crisis, particularly in light of the simultaneous announcement that Australia will contribute to US-led airstrikes in Syria. Yet at the same time, recognising refugees who are seeking protection can also complicate Australia's bilateral relationships, as this represents implicit criticism of a foreign government's relationship with its people.

Archival records of the 1970s and 1980s indicate that the Department of Foreign Affairs was mindful of the foreign policy significance of applications for refugee status, and in some cases wished to avoid offending particular countries of origin.

Importantly, resettling refugees can allow a state to overcome a difficult past and to remake itself in the eyes of the world.

For Canada, the acceptance of large numbers of Vietnamese refugees in the 1970s was in light of its failure to offer protection to Jewish refugees fleeing Nazi Germany aboard the St Louis in 1939. The people of Canada went on to win the Nansen Refugee Award in 1986, the UNHCR's highest honour. For Australia, taking Vietnamese refugees in the 1970s was a means of moving away from decades of racially discriminatory immigration policy. The Minister for Foreign Affairs at the time, Andrew Peacock, advised that Australia would attract substantial international criticism if it resettled Vietnamese from camps in the region yet 'failed to respond in a humane manner to the arrival of boat refugees from Asia on Australian territory'.

Since then, however, Australian governments have changed tack. Australia's humanitarian resettlement program, through which we offer places to refugees stuck in countries of first asylum overseas, has been used to justify the exclusion of asylum seekers who seek our protection directly. Last week, the inconsistency between Australia's acceptance of refugees from Syria and Iraq, and its detention (and deportation) of their countrymen on Manus Island, was explained by the Prime Minister as a means of not 'encouraging' people smugglers.

Recently, the New York Times published an editorial that was highly critical of Australia's treatment of asylum seekers. The Minister for Immigration, Peter Dutton, chose to issue a media release in defence of Australia's asylum policy, and yet there is little doubt that the announcement of an increased refugee intake is one way in which the Government is attempting to improve Australia's international image on this issue. Notwithstanding the Prime Minister's previous statement that Australia will not be 'lectured' on human rights by the UN, we will surely hear much more about Australia's 'generosity' towards refugees and its support for the UNHCR in coming days.

As contradictory as the Government's approach may be, it seems that what the rest of the world thinks about our refugee policy does matter.

Dr Claire Higgins is a Research Associate in the Kaldor Centre for International Refugee Law at UNSW.

This piece was originally published in the Lowy Interpreter