Brands are coming out in droves to support the LGBTIQ+ community but how is this influencing consumer behaviour? 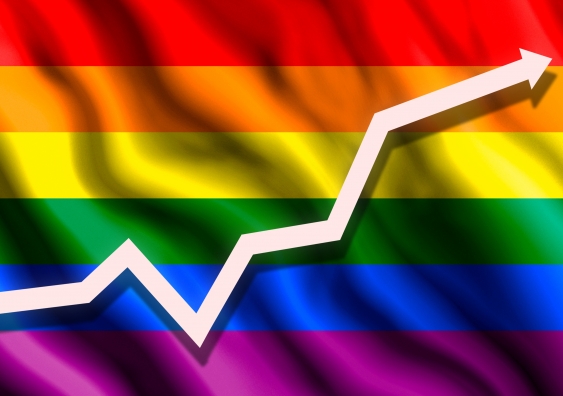 The LGBTIQ+ community has emerged as a major market driving sales and revenue.

A couple shopping for a dining room table together doesn’t seem like ground-breaking TV.

But back in 1994 when IKEA aired a commercial in the U.S. showing two men shopping for a dining room table – the first major national television ad to portray a gay couple – it made news around the world.

IKEA subsequently received hundreds of complaints, including jammed phonelines with angry calls, boycotts. A store in Hicksville NY was even evacuated because of a bomb threat.

But at the time, the head of the New York chapter of the LGBT advocacy group GLAAD told the Los Angeles Times that the ad showed “an aspect of gay life that people never see: our daily lives. Instead of showing gays and lesbians marching at gay rights rallies or suffering from AIDS, the IKEA ad humanises us. The importance of that cannot be overstated."

More than 25 years later and with the Sydney Gay and Lesbian Mardi Gras approaching, hundreds of companies including well-known banks, mouthwash and apparel brands are using rainbows and other LGBTIQ+ symbols to market their products.

The community that was once forced underground or jailed because of their sexual orientation has now emerged as a major market to help with sales and revenue.

Examples include ANZ’s #Lovespeech, Vodafone’s #connectwithlove and Bonds’ 'Out Now' campaign, while social sites Facebook and Instagram have rolled out a series of initiatives including the ‘Your Voice Matters’ campaign.

Bonds ad part of the 'Out Now' campaign.

Australians of diverse sexual orientation, sex or gender identity may account for up to 11 per cent of the Australian population, which can significantly influence the Australian economy. For example, ANZ predicted a $650 million boost to the Australian wedding industry after the same-sex marriage yes vote, with demand driving increases across retail, hospitality, arts and other sectors.

In the past, brands have been very cautious about aligning with polarising issues, and have traditionally maintained a neutral stance, says UNSW Business School Associate Professor in the School of Marketing, Nitika Garg.

“A lot of brands in the past shied away from controversial issues but now more and more are becoming bolder in some way.”

In the past, brands have engaged in cause-related marketing where they align with a cause such as raising funds for cancer research and subsequently donate part of their profits, but more recently, they are becoming active in controversial issues. This is termed “brand activism”.

“Nobody is going to say anything about (donating to) the Breast Cancer Foundation or donating to bushfire relief; there’s no controversy.”

But controversial issues will always strongly divide public opinion and brands are either gaining support or risking backlash with their activism.

The brands that truly engage with the LGBTIQ+ community authentically, and not through tokenism, have a greater chance of success.

Dr Garg said that when a brand is authentic and this comes across in their marketing campaign, the target audience will respond to it even in a 30-second commercial.

“(It’s) an emotional response, because a lot of marketing is not about providing information, but rather about evoking the right emotions.”

She said the Olay Face Anything campaign, which focused on exhausting expectations around women’s behaviour, generated a great response because it portrayed women and associated issues in a meaningful, truthful way.

“Just putting yourself in a rainbow colour is not enough. At this point, we know you have to do something that has enough pushback from the other side.”

Consumers will know if corporations engrain LGBTIQ+ policies within their companies and support the community – and if consumers are dissatisfied, they will use social media and other means to vent their concerns.

An analysis by Reboot Online of around 100 companies which ran Pride campaigns last year found that while there was a 29 per cent increase in corporate Pride, only 64 per cent of brands donated money to any relevant charities.

Dr Garg said there are corporations and brands that are jumping on the bandwagon for profit.

“There will always be companies like that, with any movement that picks up steam.”

She said this makes it hard for consumers, because they can’t always tell who is being genuine and authentic, and who is just taking advantage of a movement.

An example of this can be found in the recent bushfire crisis with a number of campaigns popping up, and Dr Garg said it’s hard to know the percentage or the real contribution that is going to the cause.

But consumers don’t need to be completely cynical about marketing campaigns, as brands can demonstrate social acceptance of a cause and provide visibility to them.

Dr Garg said she is hopeful that there are companies with senior management who care about this cause, as they are the leaders who push meaningful policies down the chain.

“They also understand the business side of it; that if we support it, we can keep this community. And kids who are coming out now, kids who will become consumers tomorrow, see this.”

Emotions and eating: a marketer’s dream?